If you're a hunter or angler with a commute and a family to consider, the Bronco Sport might be the ideal SUV for your outdoor pursuits 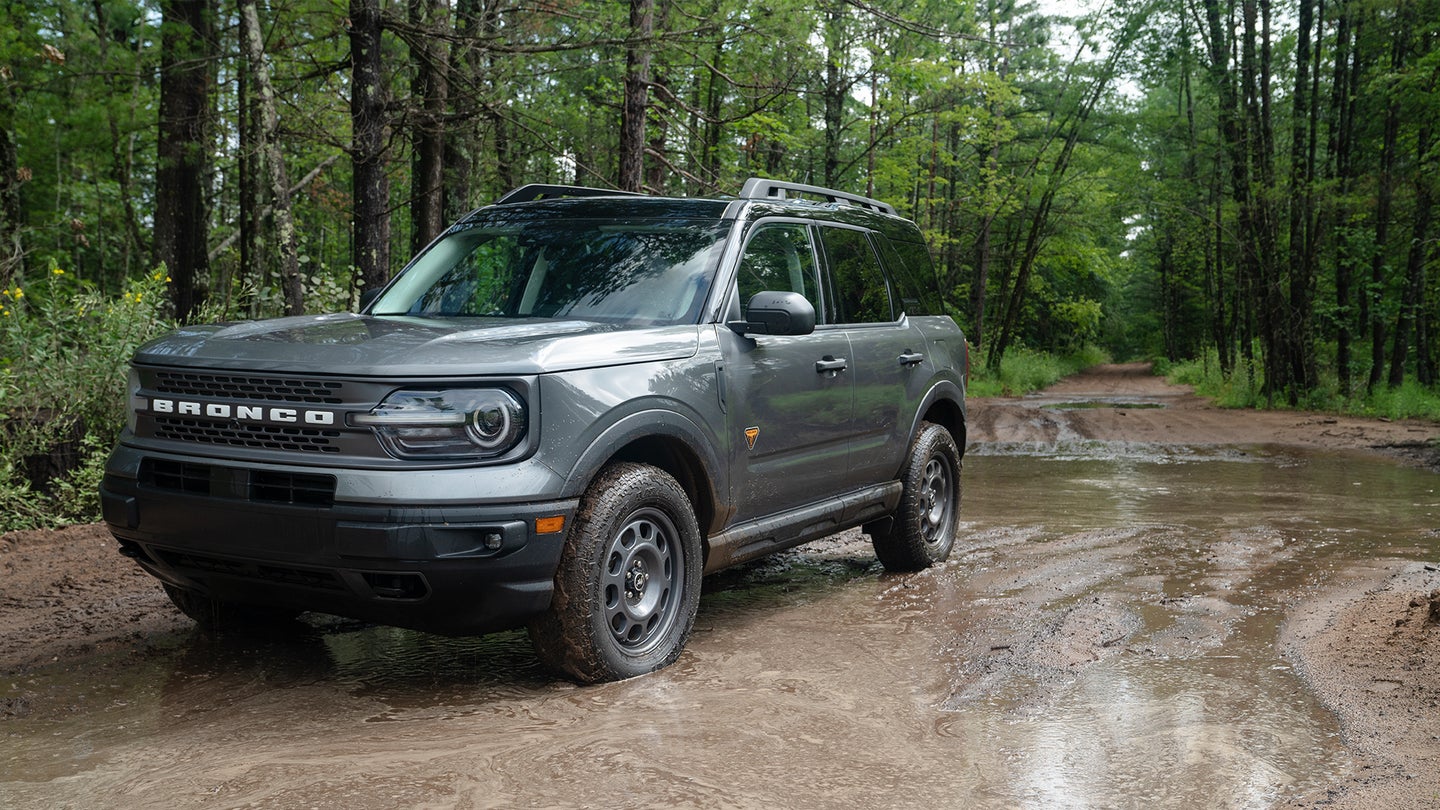 Urban hunters need vehicles that can play on city streets and in the backcountry. Also, if you’re a minimalist, you don’t need a traditional hunting truck or SUV. Or maybe you simply don’t want to pay for a new 4×4 pickup, but need the performance and reliability of one. If you’re looking for a hunting vehicle that checks all these boxes, the Ford Bronco Sport has finally arrived, and it’s a serious contender for hunters who need a do-all vehicle.

If you’re a little confused about what exactly this new SUV is, you’re not the only one. Ford released the Bronco Sport alongside the Bronco, but the two have almost nothing in common besides their names. While the full-size Bronco is a hardcore off-roader designed to compete with the Jeep Wrangler, the Bronco Sport is a more capable adaptation of the Ford Escape. I’ve heard more than one casual observer dismiss the Bronco Sport as the lesser of the two, but I disagree. Don’t let the run-of-the-mill crossover underpinnings fool you; the differences between the Bronco Sport and the Escape are substantial.

But as we know from real-world experience with rock-crawling Jeep Wranglers, Suzuki Samurais, and the new Bronco, there’s more to building a great hunting rig than off-road capability. I wanted to know whether or not the Bronco Sport could serve as a daily driver, comfortably cruise down the highway, and push into the woods when I needed it to.

First, let’s take a look a the Bronco Sport’s specifications. Note the payload (1,000 pounds) and tow capacity (2,200 pounds for the Badlands and First Edition). That’s not very much weight, so if you’re looking for a a truck or SUV that has to fit four 300-pounders in it and pull a 30-foot trailer, the Sport isn’t capable of that. But if you take a family of four fishing, and haul a 14-foot johnboat to the lake, it will do just fine.

The Bronco and Bronco Sport were completely different builds from the beginning. The bigger Bronco was built to dominate the off-road world. In the case of the Bronco Sport, Ford wanted to build a family-friendly crossover SUV that could also perform off-road in a limited capacity.

Instead of the Bronco’s body-on-frame design, the Bronco Sport uses unibody construction like you’d find on a car. Rather than an electronically-disconnecting sway bar and 35-inch tires, it sends power to all four wheels in a much more restrained manner, and uses tires that are more suited to a school pickup line. Add independent suspension at all four corners, and you get a ride that’s unusually smooth for a vehicle with off-road ambitions.

The Sport Badlands trim I tested dipped in and out of potholes without transmitting more than a slight bump to the seat. Hitting the same holes in my truck is almost enough to rattle the teeth from my skull. The 2.0-liter turbocharged engine averaged about 24 miles per gallon in town, and—much to my amazement—closer to 40 mpg on highway. Both of these feats were owed in part to the compact size of the vehicle (172.7 inches long and 82.2 inches wide, including mirrors).

Navigating crowded parking lots and urban streets was as easy as driving a midsize sedan, and the extra height improved visibility. My test vehicle even came with front and rear cameras that made tight maneuvers easy both on- and off-road. Its size made parallel parking and hauling bags of grass seed and topsoil equally easy.

There were several nice touches that helped the little Bronco stand out from similarly sized SUVs, like rubber floors that were easy to clean, effective lane-keeping assistance that didn’t intervene unless cruise control was active, and drive modes that actually worked. For example, sport mode typically ruins a car’s suspension and throttle response, but in the Bronco Sport it made the vehicle perform at a higher level without ruining the ride.

Where Does the Bronco Sport Excel?

When I ventured into the woods of northern Wisconsin, the Bronco Sport continued to deliver. I switched the drivetrain into mud/ruts mode and watched as the dash showed how much power was going to each wheel in real time. Sand mode seemed to allow a little more wheelspin (read: fun) and gave me more than enough confidence on the wet, loose trail. Ford also did right by its customers by fitting Badlands edition vehicles with knobby Falken Wildpeak all-terrain tires.

Inside, there was comfortable seating for four adults and a small middle seat to use in a pinch. The cargo area offered enough room for family luggage, a large dog, or a few coolers—just not all at once. My shotgun case fit in the back with one seat folded down, and side-to-side along the rear floorboard or on the back seat.

Put that all together, and compromise is the name of the game. That’s the Bronco Sport’s greatest strength: its ability to perform well in a wide range of environments, even if it isn’t the best in any of them. Hunters who spend plenty of time inside city limits will love the Sport. In fact, I suspect it will outsell the Bronco by a wide margin. All the things that separate the Bronco Sport from the full-size Bronco contribute to in-town manners that make it easy to live with.

Where Does the Bronco Sport Fall Short?

I didn’t have any hesitation about driving the Bronco Sport until I was about a mile into my off-road test. Soggy ground and standing water made me question the little truck’s 7.44-inch ground clearance. A heavy storm earlier that day had turned already challenging sand into deep, gooey ruts.

The Bronco Sport handled those conditions well, but I’m not sure how much further I would have pushed it. As capable as the drivetrain was, I’m a lot more comfortable off-road when I’m sitting above an old-school transfer case that doesn’t need to compute advanced math to put power to the ground. The four-cylinder engine’s 250-horsepower and 277 ft./lbs. of torque were more than adequate, but delivery will take some getting used to for those of you who come from a naturally aspirated V8.

I’d place the Bronco Sport somewhere between a Subaru Outback and a Toyota 4Runner in terms of off-road capability. The Badlands edition I tested came with seven drive modes and an eight-speed automatic transmission that I’d take over most all-wheel-drive systems and any continuously variable transmission. Still, it didn’t quite reach the rugged determination of a traditional 4×4 setup.

Space could be another concern. Unless you want a stack of long guns at your passengers’ feet, you’ll need to fold down one of the rear seats to get full-size cases in the cargo area. That would leave you with three usable seats and room for a few bags or one dog. If I wanted to take my father-in-law and his buddies dove hunting, we’d have to pack the car carefully to get everything in.

Your assessment of the Bronco Sport will depend almost entirely on what you compare it to. Can it keep pace with Jeep Wranglers at Moab? No. It also can’t tow as much as a full-size pickup or carry as much as a Suburban. But if you want those things, there are a slew of used trucks or the larger Bronco to consider instead.

Is the Bronco Sport a Legitimate Hunting Rig?

For anglers and bird hunters, the Bronco Sport should absolutely be on your short list of new vehicles to consider. Let’s not forget that a significant percentage of the hunting public lives in the suburbs, must commute into the city five days a week, and conquer a two-track on the weekends. The Bronco Sport feels like it was built specifically for these folks.

I found the size of the Bronco Sport to be perfect for navigating tight forest trails that bigger vehicles would not have been able to slip through. Sure, you can’t load a Sport down with as much gear, but since the Sport is smaller, it’s also lighter than a full-size truck, so you’re not going to sink as deep into the mud.

Build Your Own Bronco Sport

If I were ordering a Bronco Sport of my own, I would need an awfully strong financial reason not to shell out for the Badlands trim level before they sell out. I like the affordability of the base Bronco Sport and the upscale interior of the Outer Banks series, but the real off-roading goodies are reserved for the Badlands and First Edition vehicles.

For starters, the 2.0-liter turbocharged engine that comes with the Badlands badge is a significant improvement over the standard 1.5-liter three-cylinder engine. A more sophisticated drivetrain and additional drive modes help put the extra power to the ground, whether you’re dealing with pavement, dirt, or snow.

I’d opt for the 17-inch low-gloss carbonized gray aluminum wheels and add crossbars to the roof rails to accommodate a canoe, rooftop tent, or luggage rack. I’m not usually one for electronic gadgets, but the Bronco Sport’s Co-Pilot360 feature came in handy on the highway, so I’d pick that to make road trips a little safer.

Read Next: The Best Trucks and SUVs for Hunters Who Live in the City

That would bring my Bronco Sport Badlands Edition to a grand total MSRP of $37,925. Considering what comparable vehicles are going for these days, that looks pretty enticing. For those of you trying to balance family life and vacation days spent in the deer blind, the Sport is certainly a solid option.

If you want to build your ideal Bronco Sport, you can with Fords’ online configurator.