Truck Review: GMC’s Hummer EV Isn’t for Hunters, But It Does Showcase the Future of Electric Pickups

The 1,000 horsepower all-electric Hummer has the power of a sports car with the maneuverability and off-road capability of a Jeep Wrangler 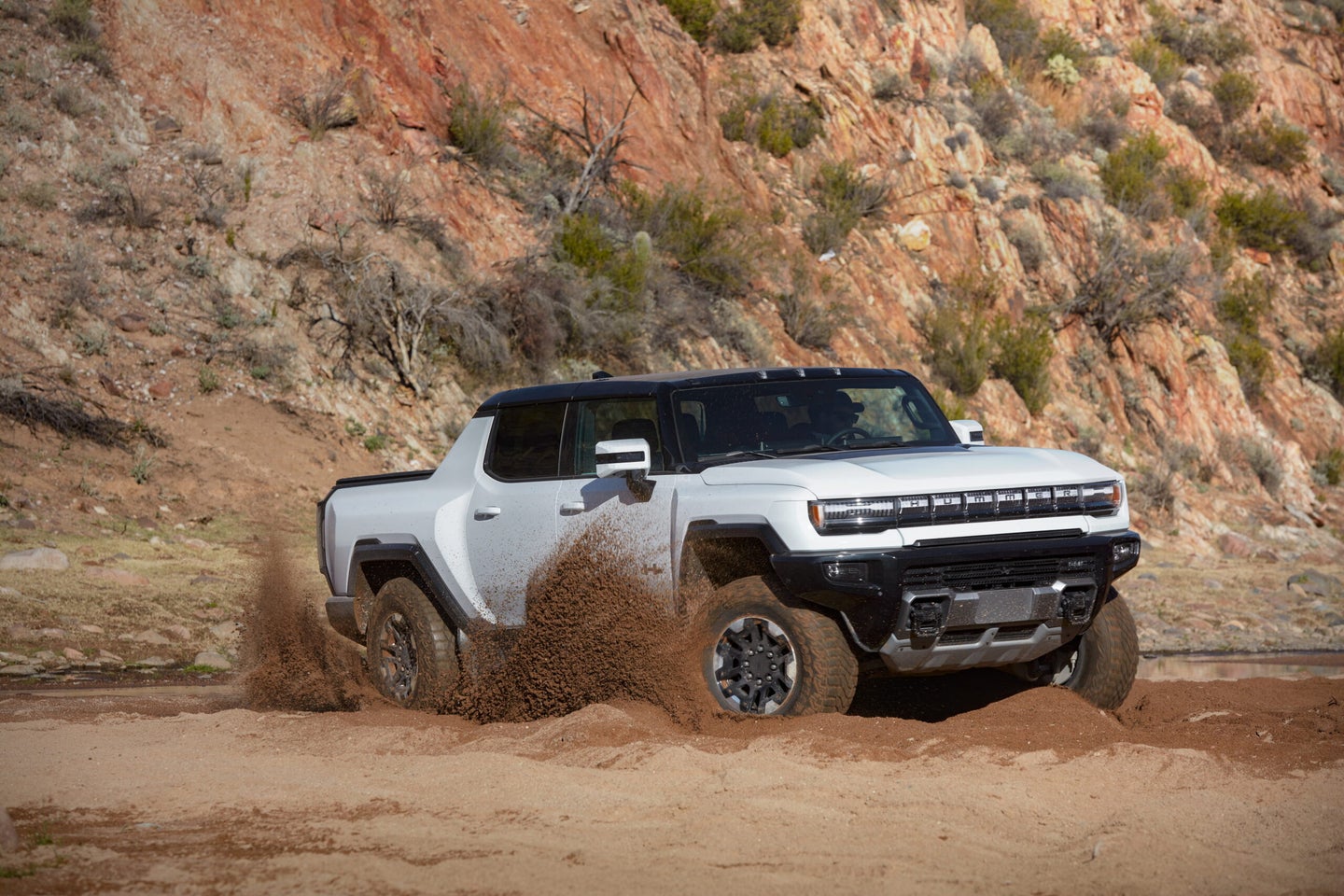 You’re probably not going to take a GMC Hummer EV on your next hunting or fishing trip. Not only does the Edition 1 version featured here cost $112,500, but the 66,000 orders taken so far have outpaced the company’s expectations, so they’re sold out until at least summer 2024. But that’s beside the point, because the Hummer EV’s job isn’t to convince you to buy one; it’s to convince the kind of people who go hunting and fishing—the people who can’t live without a pickup truck—that they want an electric vehicle. Even if they can’t afford one—yet.

Think of the Hummer EV as a showcase for new technologies, rather than as a potential purchase. Take the four-wheel steering for instance. This thing is as big and heavy as the biggest heavy duty pickups out there. But with rear wheels that can pivot as much as 10 degrees in either direction, its turning circle is smaller than that of a mid-sized truck. And that’s genuinely useful not just in tight parking lots, but also off-road, where the Hummer EV can maneuver through tight obstacles with a level of ease. It’s more reminiscent of a Jeep Wrangler than any other pickup out there.

There’s also air suspension. On other vehicles, that feature works to compromise ride quality and wheel travel off-road, but the Hummer has managed to integrate it in such a fashion where it helps improve those factors. To increase the ride height of a vehicle fitted with air springs, you have to pump more air into them. So, when you put a traditional air spring-equipped truck into its off-road height, you’re also making the suspension stiffer. That’s exactly the opposite of what you want over bumps and rocks. And by increasing the ride height, traditional air suspensions have eaten up too much droop travel, ultimately limiting a wheel’s ability to drop further underneath a vehicle. Because a tire must be in contact with the ground in order to provide traction, this added a hard limit to so-equipped vehicles over uneven obstacles.

The Hummer EV avoids both problems by offering a ton of additional height, then not using it in most conditions. In normal Off-Road Mode, the Hummer EV offers 10.1 inches of ground clearance. If you need to cross some big rocks or similar terrain, you can enter Terrain Mode, which raises the vehicle another 1.8 inches. But, even in that setting, there’s four inches of height left to go. GMC has decided to leave those on the table for most off-road driving, unless you get the truck bogged in deep sand or mud, in which case you can enter Extract Mode, and lift the belly clear of the obstacle with a full 15.9 inches of clearance. But because you’re only using all that height, and the air pressure needed to create it, at no more than a walking pace, you’ll actually be operating on nice, compliant, partially-inflated springs the vast majority of the time. And combined with the Hummer’s trick adaptive dampers, those provide extraordinarily good ride quality.

Traditionally, internal combustion engine (ICE) 4x4s employ mechanical connections between all four wheels in order to maximize traction. Four-wheel drive mechanically locks the speeds of the front and rear axles together, and then locking differentials on those axles match the speeds of the left and right wheels. It’s only with the speed of all four wheels locked together that you achieve maximum traction off-road. Or at least it used to be.

The Hummer EV employs three identical electric motors: one on the front axle and two on the rear. Software determines the relative speeds at which each axle is driven. This allows the vehicle to spin the rear axle faster than the front on soft surfaces like sand or snow, which prevents the front wheels from digging in, and bogging the truck. Hit more technical terrain, and that software can lock the speeds of the axles together, and does the same thing for each of the rear wheels. Uniquely, the Hummer EV retains a traditional mechanical locking front axle differential. Because you only tend to employ a front locker over the most challenging terrain and at very low speeds, the precise control this delivers just boosts confidence. It allows drivers to rely on muscle memory honed over decades of driving when things get tough and the risk of damage is high.

The Hummer EV Has More Power than a Super Car

Because moving the Hummer EV’s 9,063 pound curb weight is not an efficient endeavor, the vehicle is fitted with an absolutely massive 205 kilowatt-hour battery pack. To put that in perspective, that’s over twice the capacity of the battery you’ll find in a Tesla Model S P100D. And even that is only enough to deliver 329 miles of EPA range. Fortunately, charging the truck can be a quick process. Its battery cells are able to operate in both series and parallel. In the latter, they’re able to take on 800 volts of current. Find a fast charging station that’s properly equipped, and you’ll be able to add 100 miles of range for every 10 minutes the vehicle is hooked up.

One of the reasons all that battery is required is that the Hummer EV is also extremely powerful. Together, those three motors can make up to 1,000 horsepower and 1,200 pound-feet of torque. And just like the engineers have figured out a way to move power into the cells quickly, they’ve also found a method for dumping it into the tires as fast as possible too. GMC calls this setting Watts to Freedom (abbreviated WTF, you do the math). You can use it to accelerate the truck from 0 to 60 mph in three seconds. That’s significantly faster than any ICE truck ever to see production, and is a feat made substantially more impressive by the fact that it’s achieved on 35-inch mud-terrain tires. If you ever pull up next to a Hummer EV at a red light, don’t even bother looking its way. It’ll out accelerate even high dollar supercars, especially if you try to employ those vehicles’ power in real world circumstances.

But WTF doesn’t just give Hummer drivers bragging rights. It also boosts off-road capability. Pull up to a vertical obstacle off-road, and the truck will pause for a brief second while it identifies what’s going on, then flows more coolant to the motors to enable them to flow more power without harming themselves. After that half second or so, the Hummer will just climb right over whatever you’re asking it to. It’s capable of summiting two-foot vertical walls.

Any or all of that sound really cool? It is, and it’s only part of the story. Since the Hummer EV is the product of a massive automaker—General Motors—all those features, and all the other stuff I don’t have room to tell you about here, just works. You don’t need to hit a whole lot of buttons, you don’t need to think about how much it weighs or how much power it has, or what the rear wheels are doing. It’s just easy to drive, anywhere from the highway to the trail, and on everything in between.

Is It Right For You?

Even if the Hummer EV wasn’t sold out for the foreseeable future, it’s not really the right vehicle for hardcore pickup drivers. Instead, it’s a preview of what’s to come. Next year, Chevy will begin selling the Silverado EV, which is based on the Hummer’s platform, and incorporates many of the same technologies. Prices for that truck, which looks much more conventional, start at just $40,000. And there are more electric pickups in the pipeline from pretty much every automaker. If this Hummer is any indication, we’ve got a lot to look forward to.