From rimfires to big boomers, here are the new handguns that turned heads this year. 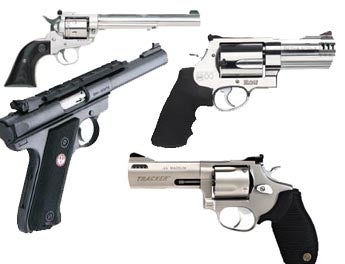 Whether you hunt the biggest or smallest game, or just pack a pistol in case the “game” decides to hunt you, the crop of handguns introduced in 2004 provides some very useful options for your days afield.

Big-bore offerings are still the trendsetters this year. Hunters will be happy to see that Smith & Wesson is now offering a new snub-nosed version of the Model 500, which will make it much easier to carry in the field. And the .375 JDJ cartridge has grown so popular as a hunting load that Thompson/Center is now going to offer chamberings for it in both its Encore and G2 lines.

Rimfire fans will find some real innovations in the way Ruger is making its new MK III, and those in the market for a lightweight .44 Magnum will like what Taurus is offering. Here are the details.

The MK III retains the grip angle, shape and operating action of the original pistol but replaces the butt-mounted magazine catch with a behind-the-trigger-guard button release that is standard on most centerfire semi-autos. Additional features include a visible loaded chamber indicator, a magazine disconnect safety, an internal lock and recontoured sights and ejection port.

The most impressive new feature is the Weaver sight base supplied with each gun. When installed into the factory drilled and tapped holes on the barrel, it rides between the front blade and the adjustable rear sights, but it sits below the sight line.

The base doesn’t interfere with iron-sight use, yet it allows shooters to quickly mount a scope or red-dot sight that is already installed in Weaver rings (not supplied).

The MK III is available in a 5½-inch, blued carbon steel .22 LR target model with checkered black plastic grips and fully adjustable target sights. Two 10-round magazines are supplied and the MSRP is $382.

The budget-priced Ruger 22/45 .22 LR polymer-frame pistol has also received some of the MK III treatment and now offers a loaded chamber indicator, a magazine safety and an internal lock. The first 22/45 P4GCMK III offered will be a 4-inch barrel, fixed-sight (three-dot pattern) model with a price of $305.

Also new this year is the New Model Single Six Hunter. Based on the Single Six SA revolver frame, this six-shot, stainless-steel model with black laminate grips features a heavy 7½-inch ribbed barrel that is milled to take Ruger’s detachable rings (supplied) and grooved for standard 3/8-inch tip-off rings (not supplied). Iron sights consist of a brass bead front and a fully adjustable shallow V-notch rear. The Hunter is available in .17 HMR ($599) or in a .22 LR/.22 Magnum interchangeable-cylinder version ($650). (928-778-6555; www .ruger.com)

[pagebreak] Smith & Wesson Model 500 “Snubby”
The massive S&W; Model 500 revolver was the hit of the 2003 SHOT Show. The most powerful double-action revolver ever made, it shoots a .50-caliber bullet suited for hunting almost any animal on earth. At over 72 ounces and 15 inches in length, however, it’s a bit unwieldy to carry as a backup handgun or for personal protection when traveling in Big Critter country.

For those who would like that kind of holster insurance, Smith & Wesson has introduced a more compact 4-inch-barreled version that tips the scales at 56 ounces with a 10Â¼-inch overall length. It’s not exactly petite, but it’s eminently suitable for high-ride holster carry, while still producing over 2,000 pounds of muzzle energy.

The 4-inch barrel features 3 inches of rifling with 1 inch of compensator to help tame recoil and muzzle jump. The compensator is easily removable, and two are included-one for lead bullets and one for jacketed rounds. It is priced at $1,150. (800-331-0852; www.smith-wesson.com)

Thompson/Center .375 JDJ
Among veteran handgun hunters the .375 JDJ is acknowledged as the original “hand cannon.” Developed by noted handgun hunter J. D. Jones, this wildcat cartridge is based on a .444 Marlin case necked down to take a .375 bullet that leaves a 15-inch single-shot pistol barrel at velocities that are only about 20 percent less than those produced by a .375 H&H; Magnum rifle.

As a handgun hunting cartridge, its track record is superb: It has harvested everything from whitetails to elephants. Previously available only as a custom barrel for single-shot pistols, it’s been introduced by Thompson/Center this year in the standard 15-inch Encore and the 14-inch G2 handgun lines.

The G2 version, with blued finish and walnut grip and forearm, is priced at $570. The blued/walnut Encore model retails for $585. Both are drilled and tapped for scope mounts and offered with iron sights. Accessory barrels to fit existing Encore or G2 frames are available for $270 for either model.

T/C also offers loaded ammunition in a 220-grain jacketed flatpoint bullet that is an excellent load for medium game. Handloaders will find a wealth of data for the 270- and 300-grain bullets that perform best on heavier game. (603-332-2333; www.tcarms.com)

For those who prefer a lighter big-bore handgun, there is the six-shot Model 444 Multi ($650). Built on a Raging Bull-style frame, this six-shot .44 Magnum revolver weighs a scant 28.3 ounces, thanks to a construction that utilizes a blend of alloy and titanium. The large-frame revolver has a 4-inch unported barrel that sports a red, fiber-optic front sight and a fully adjustable rear. Overall length is 9.8 inches. A cushioned insert rubber grip helps take the sting out of recoil, and the 444 Multi incorporates the key-activated Taurus Security System. (305-624-1115; www .taurususa.com)