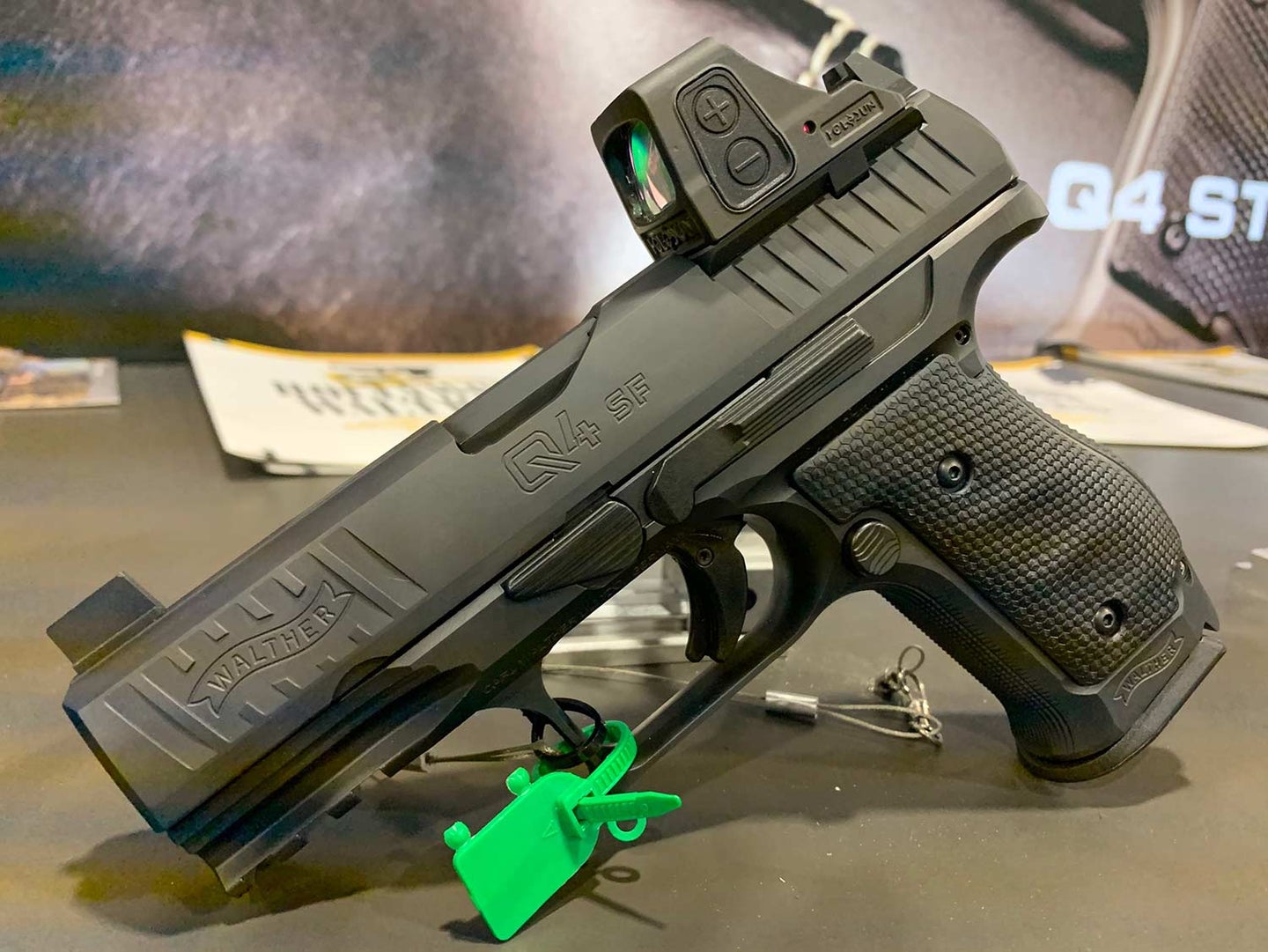 The question on everyone’s mind this time of year is what’s new from SHOT Show 2020? The Outdoor Life staff was on location and attended multiple pre-show range days and, of course, the show itself. After walking countless miles up and down exhibitor-packed aisles, we narrowed down a list of new, notable handguns we think will be of interest to you.

Be warned, just as we predicted, the red-dot revolution is in full-swing with most of the big names, and almost all the small, outfitting their semiauto service and concealed-carry pistols with electro-optic sights. If you’re a revolver guy or gal, we have you covered as well. Enjoy!

Staying true to its name, the Luago Alien, has an uncanny resemblance to, well, an alien. But don’t let that stop you from drooling – this handgun is a glimpse into the future and oozes countless desirable features the rest of the handgun industry hasn’t even thought of yet. The barrel is fixed, operation is via gas piston, and the slide only reciprocates on the sides, which means the red dot sight doesn’t move, allowing easier tracking and unmatched durability. The Alien boasts the lowest center of gravity and lowest bore axis of any semiautomatic on the market – by a significant margin – and has virtually no muzzle flip and an uncanny level of precision. If you want to know what the future looks like, look no further than the Alien. MSRP: $5,000. luagoarms.com

Joining a growing number of manufacturers offering miniature red dot sights on pistols for 2020, SCCY (pronounced Sky) just might be the smallest of the lot. The compact nine, which carries a price tag of $389, comes equipped with a tiny Crimson Trace CTS-1500 red-dot sight milled deep into the slide. The sight features a fixed rear sight notch built into the housing that kind of co-witnesses with the standard-sized front sight. Flat triggers on pistols are in vogue, and the DVG-1 and DVG-1RD follow that trend. sccy.com

The list of manufacturers now offering pistols is rapidly increasing, which is great for you and I – variety being the spice of life. New to the pistol market is NEMO, famous for its precision rifles, namely their semiauto .300 Win. Mag. The pistol line hit the ground running and hits all the high notes of what a modern defensive pistol should be. Red dot ready, co-witnessed suppressor-height sights, striker-fired, 5-inch threaded barrel, aggressive front and rear serrations, extended controls and an aluminum frame featuring a grip contour we wish was an industry standard. The cost is around $900. I can’t wait to spend some more time with the Monarch in 2020. nemoarms.com

The new Q4 SF (Steel Frame) is the smaller, more concealable brother to the competition Q5 Match SF, that last year we labeled as a glimpse into the future of handguns. The Q4 SF now boasts tall suppressor-height iron sights that co-witness with most electro optics (just as all CCWs should). The big news is the addition of the steel frame, albeit in a reduced size and somewhat recontoured, deleting the large extended beavertail found on the Q5. This pistol is a concealed carry race car that we predict will set a new trend for compact pistols. MSRP: $1,499. waltherarms.com

Just like most things Heckler & Koch, Europe received the optics-ready VP9 before North America did, lending credence to the internet joke that HK hates us. We caught a glimpse of the updated VP9 at a retailer in Europe over the summer which both excited and disappointed us at the same time. The updated VP9 does receive new 17-round magazines, replacing the legacy 15-rounders, so maybe they don’t hate us that much. Maybe. With that said, HK has finally joined the red dot revolution, where most its competitors are going or have already been, for some time now. Welcome to the party HK! MSRP: $799. hk-usa.com

We have never quite understood how Glocks numbered naming actually works, and the Model 44 continues to leave us scratching our head. Half of 44 is 22, so there is that. Regardless of the naming convention, we are very excited to finally see a factory .22LR pistol from Glock. It’s Glock 19 sized and will fit in most, if not all, holsters designed for that model. Our only complaint is how light the pistol is, which makes shooting it a little more of a challenge. The MSRP is $439. Rumor has it the secondary market already has threaded barrels in the works. glock.us

Read Next: The Best New Guns, Ammo, and Hunting Gear from SHOT Show 2020

Most Ruger products make a lot of sense and greatly appeal to the masses; which is their core consumer. A pistol 5.7x28mm though? Everyone thinks a 5.7 pistol is cool until it’s time to find, never mind buy, ammo to feed it. Last we checked, you’re looking at about $1.25 per round. Hopefully Ruger knows something that we don’t and a surplus of US Secret Service ammunition is about to hit the market, as most everyone else has already dumped the round. With that said, if you’re in the market for a 5.7 pistol and are sitting on a stockpile of ammunition, the Ruger 57 is feature rich for the dough. The slide is drilled and tapped to accept optic mounting plates, capacity is 20+1 rounds and the ergonomics of the pistol are very comfortable for my size XL hands. The 57 offers all the industry standard features you’d expect and at a price point of $799. ruger.com

SIG Sauer has seen the future and the future is now. The company’s unofficial tag line for the 2020 SHOT Show was Red Dot Revolution, and virtually every pistol for 2020, both big and small, is going to at least have the option of accepting a red dot sight. SIG continues to prove they are ahead of the competition in this arena. The new Romeo1 PRO (MSRP: $999) has officially been released and replaces the legacy Romeo1 miniature reflex sight. The PRO model received functional updates and a Leupold DeltaPoint Pro mounting footprint, aligning with the US Army’s new service pistol, the M17/M18. Moving forward, all SIG Sauer service-style pistols will be compatible with this updated footprint. sigsauer.com

After the successful launch of the MC2sc pistol last year, marking Mossberg’s entry back into the handgun market after a nearly 100-year hiatus, it was only natural for the manufacturer to introduce a compact version. The MC2c is a mid-size compact destined for concealed carry. Magazine capacity is 13-rounds for the flush-fit mag and 15-rounds for the extended, putting it mostly in-line with its competition. The MC2 and MC2c are very Glock-like, with a surprising number of parts interchangeable with the other. MSRP: $490. mossberg.com

While not necessarily new for 2020, the .38 Special +P rated 856 debuted at the 2019 SHOT show, but as a snub nose. The Defender 856, however, features a 3-inch barrel and equipped with factory night sights making it much more practical for concealed carry and certainly easier to shoot – especially at distance. An extended ejector rod sure speeds up reloading time and we appreciate that several finishes are available, all at a reasonable MSRP of $477, with an in-store price significantly less than that. taurususa.com

The legendary snake gun is back. We will forgo the introductions and explanation of why this particular gun matters. If you know, you know. Rumor has it Colt sold all they had already produced, and after the first day of the show were backordered an additional 16,000 units. The. First. Day. If you’ve always wanted a Python but couldn’t: A) locate one, or B) stomach the price of a used one, you’re finally getting a second chance. Get one while you can. MSRP: $1,499 colt.com

While the name is certainly a mouth full, Smith & Wesson seemingly struck gold with its Shield and again with its Shield .380 EZ. Everything about the EZ is designed to be, well, easy. As in easy to use, an easy-to-rack slide, an easy-to-load magazine, and an easy design to easily clean. With an MSRP of $479 it is also fairly easy on the wallet. Those with reduced hand-strength will no doubt appreciate the grip safety and smart features integrated into the pistol. Thankfully the EZ is now available in the more prevalent, and more appropriate for self-defense, 9mm. smith-wesson.com