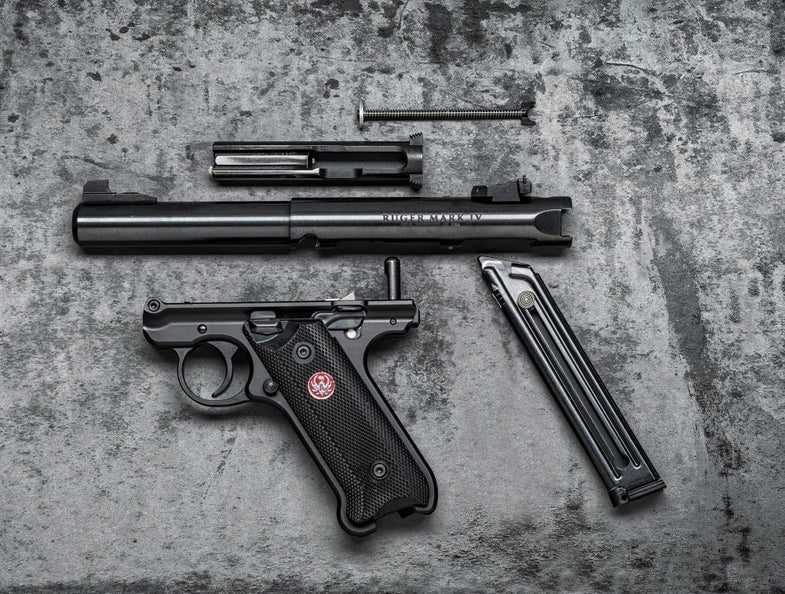 Breaking down the Ruger Mark IV for a thorough cleaning is a simple task. Bill Buckley
SHARE

When I was in my late teens and had finally managed to save a bit of money while working some unsavory jobs, I bought a car—a ’71 Volkswagen Karmann Ghia for $1,100—and not long after, my first guns. Both were .22s, and both were within my meager budget. The rifle was a Marlin Model 60. I splurged on that one and purchased it new.

The handgun was a Ruger Mk I. It was under glass in the used-gun section of my local gun store and I couldn’t resist it. Like my Karmann Ghia, it, too, was built in 1971. Somewhere along the line, someone had Parkerized it, and over the years the finish had developed a grayish-green patina. With its frame geometry and barrel profile reminiscent of the Luger P08, it was a natural pointer. And after purchasing the gun, point it I did. At paper targets, tin cans, cottontails, gray squirrels, wasps’ nests—you name it. I couldn’t even begin to estimate how many thousands of rounds it has digested over the years.

The Mark I is simplicity itself. Other than the trigger, the only controls on it are a two-position safety that doubles as a bolt lock, cocking serrations on the back of the bolt, and a hook-style magazine catch on the bottom of the frame. However, there is one significant exception to the Mark I’s elegant design. Try to field strip it for a thorough cleaning and you’re in for one heck of a chore that involves banging, cursing, and a sequence of movements during reassembly so complex, you’ll wonder if you’re putting together a pistol or initiating a nuclear strike. Over the years, Ruger introduced the Mark II and, later, the Mark III series, each with various refinements and enhancements. But cleaning them still remained a Herculean task. Well, no longer.

The Mark IV is Ruger’s newest rimfire pistol, and the primary characteristic that distinguishes it from its predecessors is the takedown button on the back of the frame just below the cocking wings on the bolt. When the pistol is on safe, a simple push of that button tips the barrel forward and separates it from the frame. It’s a leap on par with evolving an opposable thumb. We’re going to look back on this and wonder how the heck we managed to keep our Mark Is, IIs, and IIIs clean all these years. The answer is, we didn’t. We only ever cleaned them under duress, like toddlers being forced to eat steamed vegetables.

The Mark IV is offered in two versions—the Target and the Hunter. The Hunter has a fluted 6.88-inch barrel and sights with a fiber-optic up front and a V-shaped notch that adjusts for windage and elevation in the rear. The barrel and frame are stainless steel and the MSRP is $769.

The Target is available with a blued finish that has an alloy steel barrel and an aluminum frame for $529, which is the one I evaluated here, or with a stainless-steel frame and barrel for $689. Both come with 5.5-inch bull barrels and adjustable target sights.

All Mark IVs are tapped and drilled to accept bases to accommodate scopes, red-dots, or other sighting systems.

All the controls are easy to reach and manipulate, even for a left-handed pistol shooter such as myself. The safety is particularly well designed. It provides enough of a shelf for the thumb to toggle it from safe to fire in an instinctual fashion. And in the “fire” position, it sits right where it should, serving as an index point for the thumb on the shooter’s dominant hand.

The magazine release gets a little boost from a spring-loaded tab located at the base of the frame that ejects the magazines out of the well with gusto. (The Mk IV comes with two 10-round mags.) When I turned the pistol grip up and hit the button, the tension on that tab was nearly strong enough to throw an empty magazine clear out of the well.

The Mk IV feeds, extracts, and ejects rounds the same way as do previous models. The magazines have a single-stack design that places the rounds in line with the feeding ramp that guides them into the chamber. A spring-loaded claw grabs the cartridge rim and extracts the empties from the chamber, while a fixed steel ejector pops the rounds free.

I only had two failures to eject during the evaluation. Two empties stovepiped on me in the first 100 rounds. I used this as an opportunity to disassemble the pistol, wipe off some of the crud, and add a bit of oil to the bolt. After that, the gun performed flawlessly. The remainder of the evaluation consisted of more than 1,000 rounds shot under varying circumstances, including while using a loose “limp wrist” grip in an attempt to induce another malfunction, which I was unable to do.

The accuracy of the Mark IV was quite good with the half dozen different loads I put through it. I shot 10-round groups at 25 yards from a bench, using a bit of padding to support my hands, and the average group size was right around 1.5 inches.

The pistol tended to string the shots horizontally, which is typically an indication of issues with trigger control. The trigger on my Mark IV broke at 4 lb. 15 oz., with a fair bit of creep. That’s quite a bit heavier than what a proper target pistol should have, so it made sense that my groups had that horizontal element. Regardless, the accuracy is good enough for almost any hunting or plinking application, which is how the Mark IV is going to be used most frequently.

As with other pistols in Ruger’s Mark series, the trigger reset is quite long, Shooting rapid strings of fire requires a bit of acclimation to that. This isn’t a criticism—more of an observation, for anyone wanting to use the pistol as a trainer for action shooting or to hone personal defense skills.

One gripe I do have with the pistol, however, pertains to its balance. The Mark IV Target weighs only 3 ounces more than my Mark I, but the way it handles is completely different. So much of the Mark IV Target’s weight is in the bull barrel that the gun feels sluggish and doesn’t point nearly as naturally as the Mark I. (With its steel, rather than aluminum, frame and slender barrel, the Mark I sits more squarely in the shooter’s hand.) A version of the Mark IV with a tapered barrel—maybe call it the “Classic”­—would be a nice addition to the family.

The bottom line, however, is that Ruger has another winner on its hands. The Mark IV is a continuation of the company’s legacy when it comes to producing fine rimfire pistols.