Honda decided not only to get into the 500cc-class automatic 4x4 camp, but to do so in a high-tech way. 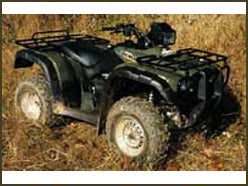 **Honda FourTrax **
Honda decided not only to get into the 500cc-class automatic 4×4 camp, but to do so in a high-tech way.

The FourTrax Foreman Rubicon is Honda’s largest and most powerful sport-utility and the first to use the all-new “Hondamatic” transmission, which, by the way, is the star in this lineup. Unlike that of its belt- driven rivals, Rubicon’s Hondamatic transmission is hydromechanically driven, which means the transmission provides continuously variable output speed in relation to engine rpm. (In other words, torque increases as output shaft speed is reduced to provide power wherever it’s needed most.)

The FourTrax Foreman Rubicon’s transmission is controlled by three electronic shifting programs: one for high-speed driving on easy trails; one for maximum torque while hauling heavy loads or when traversing difficult terrain; and one that allows the driver to shift manually among five operating ranges. Switching manually between transmission modes is as easy as turning a knob on the dash. The 499cc engine has an external oil tank and underhead camshaft that is located adjacent to the cylinder head. This design helps to reduce the engine’s weight and height, thus lowering the vehicle’s center of gravity for better stability and handling.

Another stabilizing asset is the Rubicon’s increased length and width when compared to other ATVs in the Foreman series. Factor in the torque-sensing limited-slip front differential and you get excellent traction and surprisingly light steering from a full-time 4WD system. The suspension gives a decent 6.7 inches of up-and-down wheel travel and 10 inches of ground clearance. We hit some rough logging roads and drove over some downed trees at a fast clip and the Rubicon sucked up the rough stuff like a champ.

Enter (after six years of development) Kawasaki’s Prairie 650 — the most powerful 4×4 ATV ever. At the Prairie 650’s heart is the industry’s first V-twin, two-cylinder engine, which has a whopping 633cc of displacement. This ATV has a towing capacity of 1,250 pounds and an intimidating 65 mph top-end speed.

Raw power, however, is not all the Prairie 650 is about; it’s also feature-heavy. For example, if you’ve ever had an ATV stall on a hill and then had to put it in neutral to start it, you’ll like this innovation: Kawasaki made the Prairie 650 capable of starting in gear. Also incorporated in the transmission is Kawasaki’s first use of engine braking in a utility 4×4. Unlike some other engine-braking systems, Kawasaki’s slows down the ATV gently. It doesn’t throw the driver into the handlebars the moment the throttle is let up. We tried this on flat land and steep slopes and found that it works well.

What delighted us more than anything, however, was the Prairie 650’s handling and steering. When we first hopped onto this new ATV we were expecting a bulky ride — after all, this automatic 4×4 does sport the biggest engine in its class. But it wasn’t so. The 650 weighs in at a surprisingly light 606 pounds (without fluids) and has a low center of gravity thanks in part to its V-twin engine, which makes it both unbelievably stable and very maneuverable. Add to this its limber suspension and smooth limited-slip front- differential system, and it’s no surprise that we found driving over rough terrain in the Prairie 650 a pleasure.

Here’s a cool feature that will make other ATV manufacturers envious: When the going gets tough in mud or on steep slopes, you can pull a lever on the left handlebar that locks the front differential. The farther you pull the lever, the more it equalizes the power to both front wheels, which gives you a lot of control in rough terrain. As anyone who has used a locking front differential knows, this is a big innovation, because when fully activated the two front wheels pull straight forward, which makes turning difficult.

Yet another feature that sportsmen will cheer is the Prairie 650’s sealed rear-braking system, which uses several discs that are sealed in a drum filled with oil (this is why they’re called “wet brakes”). Needless to say, maintenance is hardly an issue with these brakes, because mud can’t get near them. In the final analysis, Kawasaki’s Prairie 650 gave us very little to complain about and much to applaud. (877-529-4288)