The Remington Genesis is the latest step in the evolution of ultra-accurate muzzleloaders. 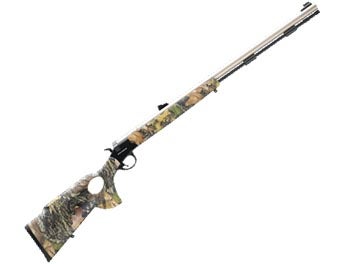 Since the commercial introduction and immediate success of in-line ignitions in 1985, we’ve seen a flood of muzzleloader action designs introduced to deliver straight-into-the-breech fire. Oddly, and in a curious reverse evolution, the first actions were complicated modifications of a pull-to-cock mechanism. Those gave way to simpler bolt actions, and bolts yielded to even simpler exposed-hammer, break-open actions.

Now Remington has gone a step forward-or you might say backward-by introducing the simplest in-line design to date. The Genesis firing system has only two moving parts, yet it solves all of the complications and drawbacks inherent to in-line muzzleloaders.

The Genesis Concept
As with many muzzleloaders, in the Genesis an exposed hammer strikes a floating firing pin. On impact, the pin drives forward to strike a cap, in this case a 209 shotgun primer. What’s unique to the Genesis is that the firing-pin assembly is housed in a solid steel block that pivots out of the way with the flick of a finger. Once pivoted, the breechplug is exposed for capping, decapping or removal for thorough cleaning.

Flipping-breech designs were experimented with when cased cartridges were introduced. That application was limited to mild-pressure cartridges because of the rearward movement from the case during firing. With a muzzleloader, there’s no rearward movement or pressure except for some slight gas blowback through the touch hole, making a flipping breech ideal.

Rigid Construction: This design approach gives the Genesis rigidity in the barrel-to-frame lock-up that break-open designs can’t match. A steel underlug, milled as part of the barrel, fits into a matching cutout in the frame, and the two pieces are secured with two screws, essentially creating a stiff, single unit. That translates to long-term accuracy and repeatability, with none of the loosening tolerances found with break-open actions.

While in-line action styles have been diverse, there is one constant in every .50-caliber offering. All are supplied with a 1:28 twist. That configuration is optimal for conical or saboted hunting bullets. The Genesis is no exception. A charge of 100 to 120 grains of blackpowder or Pyrodex and a bullet weighing 295 to 325 grains delivers the best results.

**Stellar Accuracy: ** For testing, I cleaned the barrel and fired a fouler before firing each three-shot group. With the 300-grain Winchester Supreme Partition, the 325-grain Buffalo SSB and the 295-grain Power Belt conical, the Genesis never exceeded 2½ inches at 100 yards, with some groups in the 1- to 1½-inch range.

**Solid Design: **Remington plans to offer the Genesis in the entire gamut of stainless and blued, plain and fluted versions, with numerous stock choices. Prices will vary from $284 to $599, based on hardware and stock. I have no doubt that the least expensive will shoot every bit as well as the highest priced. This is a solid basic gun, and the external options are purely cosmetic.