Pups go to the woods already knowing how to trail and tree. 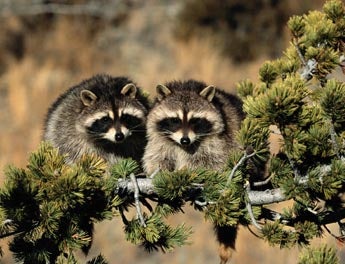 Finally, coon hunters can join pointer, retriever and flushing dog trainers in conducting controlled pre-training before going on an actual hunt. This can save years of mistakes and corrections and the waste of so many well-bred hounds that never reach their potential. More than a decade ago, Jim Dobbs, an innovative and astute trainer with a knack for seeing how successful techniques in other breeds can be modified to better train hunting dogs, adapted an idea from a schutzhund trial to develop a new way to jump-start young coonhounds in trailing. Adding a form of Just Noticeable Difference (JND) training allows coonhunters to do controlled training so complete that pups can go to the woods knowing more than most 2-year-olds.

Starting is conventional. Begin training on a downhill slope with a coon in a rolling cage. Use a rolling cage because the faster the coon goes, the more confidence the pup has in chasing and barking. A coon in a rectangular cage seems to be taking a stand and might inhibit a youngster. When barking at a coon seems wildly exciting for the pup, throw a rope over a limb and pull the caged coon just out of reach. Jiggle the cage up and down to get the pup started barking treed.

New Scent Technique
When treeing is well established, it’s time to learn trailing. The first step is to lay a scent trail. The traditional way was simply to walk a collared coon snapped to the end of a pole. Unfortunately, the hound quickly learned it was a game and that it was easier to trail you to the tree than to work out the lighter coon trail.

With our method, outlined below, you lay a straight track in which coon scent decreases as scented water squishes out and evaporates from felt soles affixed to your boots, but your own scent increases. Hounds trail by moving toward stronger scent, so it’s unnatural for most pups to backtrail you to the coon. Your serpentine return track increases in strength, but you’ll know when he’s leaving the straight coon track to trail you. Stop him with the short leash until he gets tired of not having fun and returns to the coon trail.

Later, various animal scents can be cast on weighted rags and dragged across the coon trail to teach the hound that only coon is acceptable. Bottled scents are acceptable for this.

Dogs are right- or left-handed, so bring the hound perpendicularly to the 50-foot trail extension. If he turns right and that leads toward the coon tree, fine. Next time, however, come in from the other direction. Turning right will be in the direction of diminishing scent. If he doesn’t turn around in a few feet by himself, stop him until he does. This will teach him that backtracking is taboo.

[pagebreak] Vary The Routine
When the hound barks up a tap tree (a tree a raccoon has climbed up and then down), circle him around to the trail going away. Circle him around the coon tree as well so he learns to check all trees for trails leading away. Use the original setup several days in a row, then reduce the repetitions to two or three times a week to prevent boredom. Also change the sequence of trees, gradually reduce the noticeable scent difference, lengthen the trail extension and use markers so you can crisscross curved and complex coon trails. Finally, practice at five other locations where trees are farther apart-across lawns, in pastures, in parks if permitted-so your hound doesn’t think the training works only in one place. Finish your training at dusk in the woods, where bushes and saplings and other scents can be a distraction.

When the exercise has been repeated often enough that the hound can be turned loose to find the track, trail in the right direction, circle tap trees along the way, ignore all scent except coon and keep treeing until you arrive-everything a coonhound needs to know-he’s ready for the woods. This is not to say that a deer jumping out from under hhis nose won’t be temptation enough to cause a chase, but he will know he shouldn’t be doing it. Correction will come as no surprise, and it won’t have to be repeated often. Hunt him by himself the first season so good habits become well ingrained. An old hound with bad habits could ruin much of your skillful training.

Tap Trees Terminated
At Lackland Air Force Base, where thousands of dogs have been trained to find explosives or drugs, JND means “Just Noticeable Difference.” Dogs are taught not to locate on slight peripheral scent, but to investigate more thoroughly until they find the actual object emitting the JND. Jim Dobbs, at Dobbs Training Center in Marysville, Calif., quickly recognized that JND training was precisely what young coonhounds needed to help them differentiate between tap trees and the tree the coon is really up. Drawing from the Air Force example, Dobbs recommends finding a group of trees that are close together and scenting the tree with a caged coon much more heavily than the rest. Then let the young hound repeatedly work out the problem for himself-it will go a long way toward eliminating lockup on tap trees.

**1. FIND AN OPEN GROUP **
of trees in a fairly straight line. Place a caged raccoon in a tub and pour about 2 inches of lukewarm water over it. Rope the caged coon up the first tree.

**2. STEP INTO THE WATER **
with rubber boots to which felt soles have been taped. At the same time, fill a spray bottle with the scented water. Slosh the leftover water onto the tree.

**3. WALK A STRAIGHT LINE **
to the next tree. Spray each tree lightly as you go past, then walk about 50 feet beyond the last tree. The hound will be brought to this spot to start trailing.

**4. CHANGE YOUR SHOES **
to those you’ve taken along, and throw the boots well out of the way. Walk back from tree to tree, crisscrossing the straight scent line in a serpentine fashion.