How to Spot-and-Stalk Your Way to an Archery Antelope

Big-game seasons kick off with late-summer archery antelope. Here's how to ditch the blind and tag your buck 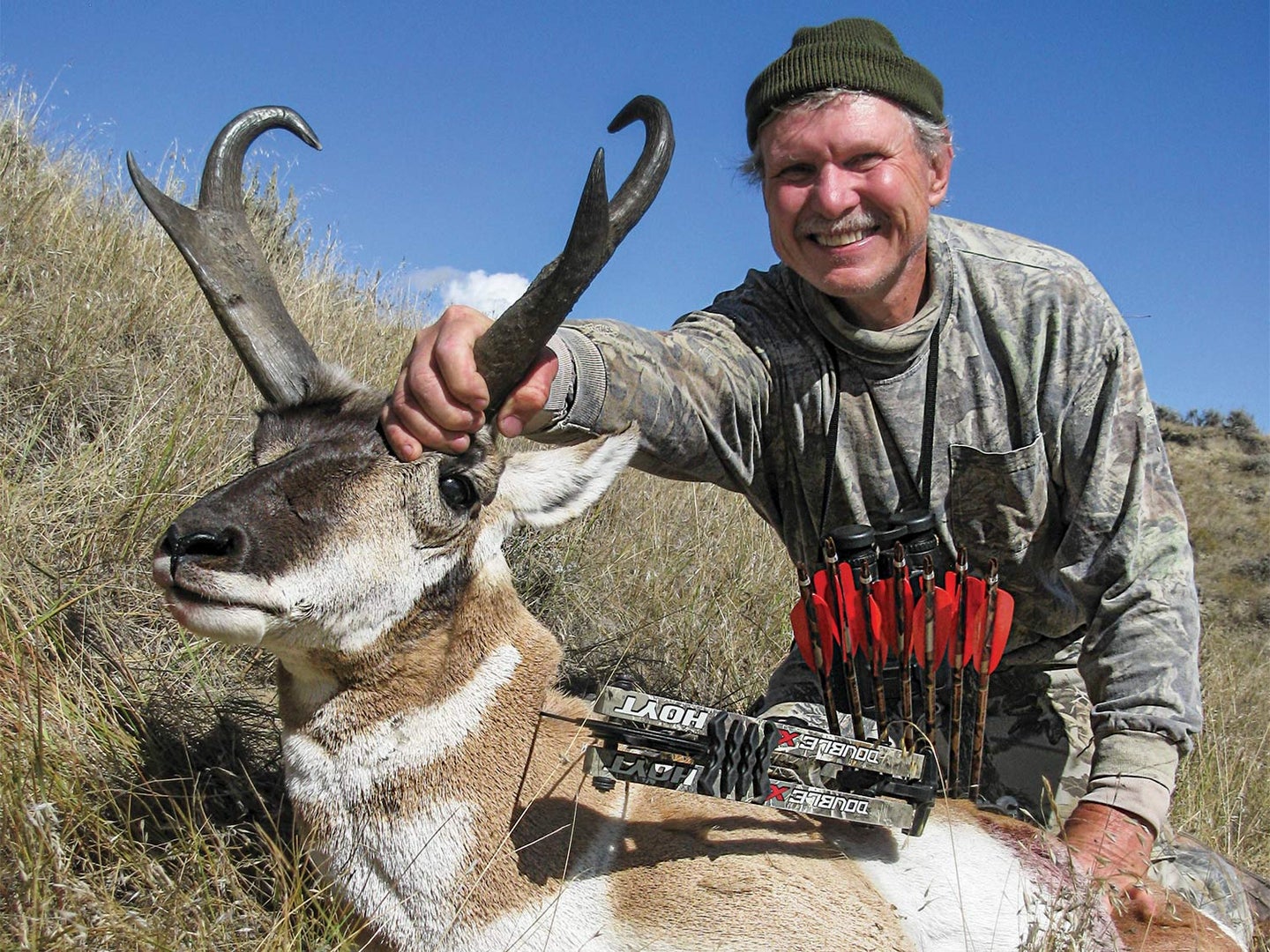 When archers discovered the shovel, pronghorn hunting got easier. About 40 years ago, bowhunters began setting up for antelope from covered pit blinds near water holes. They found that these keen-eyed prairie dwellers could not clearly see from bright sunlight into a shaded blind, and the result was point-blank shots at relaxed animals. Today, most bow­hunters use pop-up blinds for antelope.

I have taken several antelope from blinds, and it’s effective. But unless a steady parade of critters is crossing in front of you, sitting in a blind is about as thrilling as watching a TV with the power turned off. I prefer bowhunting antelope on foot. It’s never easy, but I love the challenge—and you can do it regardless of water or weather conditions.

You need suitable terrain for stalking antelope, which means plenty of ridges, gullies, and extra-tall sage. Flat ground is tough.

Light-colored camouflage is necessary to help you hide in pronghorn habitat, but camo alone won’t do the trick if you try to move in the open. If you can see an antelope’s eye, the animal will certainly see you move, even from several hundred yards away. You cannot sneak close or draw your bow unless your target’s head is completely hidden behind a bush or solid ground. And be sure your bow is quiet; antelope can jump the string like no other critter in North America.

September is the best time to bowhunt pronghorns on foot because bucks are rutting and therefore preoccupied with females. One of my favorite tactics on rutting antelope is separating the herd buck from his harem. Dominant bucks will viciously chase rivals away. If you lurk a few hundred yards from a rutting herd and watch, the buck is likely to run off sooner or later. Wait for that to happen, and then make your move.

I shot my best-ever pronghorn just last September by using this tactic. That 81-inch monster had two dozen does in his harem, and smaller bucks were constantly trying to sneak in. The big boy chased a juvenile out of sight, and so I set up between the herd and where he had gone. The females spooked, but I crawled into a gully to wait.

In a few minutes, the buck came huffing back and was startled to find his girlfriends gone. He started crisscrossing the country looking for them, and when he dropped into the ravine beside me at close range, I was waiting at full draw.

Read Next: Where and How to Hunt Antelope on a Budget

If you can’t split a buck from his harem, you’ve got to try to weasel in close. That can mean moving fast because rutting pronghorns move a lot.

Pronghorns are most active early and late in the day, so your best chance of stalking a stationary herd is at midday. But they are territorial, so even if you spook a buck, you’ll probably find him again in the same general area. I’ve stalked and scared the same antelope up to a half-dozen times in a single afternoon. Most often, they run a ways, stand and gawk, and then quickly settle down. So keep trying. If you’re up to it, you can pack a lot of hunting into a single day.

Antelope can be curious during the rut. They sometimes approach a white handkerchief waved above a ridge (a tactic called flagging). And dominant bucks will often charge a pronghorn decoy lifted into view from a draw or above a hill.

Both techniques take advantage of an antelope’s telescopic eyesight. But trying to shoot at a decoyed buck can be a problem. The approaching animal is always on high alert. Flagging and decoying work best with two people: one to manipulate the ruse, and the other to take the shot from a hiding place to one side.