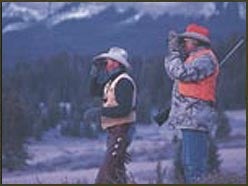 During late summer and early fall, the nature of the mule deer buck conspires against him. His antlers, which at this point are either covered in velvet or freshly unveiled, are quite soft and tender. So, rather than hide in thick brush as he would prefer, he’s forced into the open by fear of bruising his tender rack. Which makes him easier for hunters to spot. The fact that he’s also running with other bucks in small bachelor herds further compounds his problem: Now he’s milling about with a pile of buck…in a clearin…during the first of the year’s hunting seasons. His headache only figures to get worse.

That said, almost every hunter knows that mule deer are rarely easy and that getting a shot will take some work. However, there’s one thing you can do to increase your advantage. I’ve hunted muleys in all types of terrain–in high alpine bowls in the West, across California’s coastal mountains in the sweltering heat of July and August, through the sagebrush flats of several western states–but no matter where I go, or which bucks I chase, one constant remains: Deer need water.

Deer have to drink daily, and in areas where it’s brutally hot and water is scarce, setting a tree stand or ground blind near a water source can be a dynamite tactic, provided, of course, that you’re patient and have scouted the area thoroughly. The obvious reason is that deer have to come to water. The not-so-apparent reason is that a stalk–the classic way to hunt muleys–over the usually dry, crackling ground of late summer is like trying to sneak a sunrise past a rooster.

But undoubtedly, spot-and-stalk is the most exciting way to hunt muleys, and providing ground conditions are right, it can be one of the most effective. Among my favorite hunting experiences is to climb high into the Rocky Mountains in late August or early September and spend the days hiking along and glassing for oversized muley bucks. I always check out the lush alpine bowls along the northeast slopes, especially where the bowls border dark timber and, perhaps, rock ledges. Another terrain feature I never overlook is a low saddle passing between bowls and mountain faces; deer love to use saddles as travel corridors.

Thermal currents play a critical part in stalking hot-weather bucks. At first light, when a hunter can glass deer as they feed, the thermal air currents usually are moving down the slope. Soon, however, the deer will feed uphill to a place where they can bed for the morning, chew their cud and watch the world go by. They almost always bed looking downhill. By watching the deer settle down and waiting until mid-morning when the thermals turn and flow up-slope, a hunter can make his move and come in from above the bedded bucks.