A collection of fascinating facts 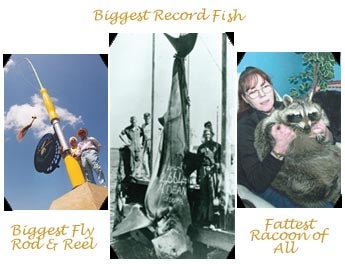 You’re probably not acquainted with Sir Hugh Beaver, but you certainly know his brainchild. In 1951, Sir Hugh was hunting with a party in Ireland. Someone in the group shot at, but missed, a golden plover. This prompted a discussion: What is Europe’s fastest game bird: the golden plover or the red grouse?

Sir Hugh concluded that a book supplying answers to such questions might prove popular in the pubs that sold his company’s products. You see, Sir Hugh was managing director of Guinness Brewery, and his brainchild, as you probably have guessed by now, is the best-selling copyrighted book of all time, the Guinness Book of Records.

Hunters and anglers have always loved discussing superlatives. No matter where we are-casting plugs on a bass lake, walking up quail on a plantation or sharing a few beers around a poker table when the day has ended, the conversation is likely to turn to the extreme aspects of the hunting and fishing sports we enjoy. To stimulate such tasty dialogues wherever Outdoor Life readers gather, we present the following randomly chosen morsels, sure to nourish the intellect and satisfy every appetite.

Oldest Tagged Fish
Fisheries biologists with the Missouri Department of Conservation have been tagging and recapturing shovelnose sturgeon on the Missouri and Mississippi rivers for decades to learn more about these prehistoric fish. This long-term effort was rewarded in late 2002 when biologists recaptured a fish that was tagged by one of their predecessors an incredible 24 years earlier. The 4-pound sturgeon turned up in a net in the Missouri River near Jefferson City, 119 miles from the original tagging site at St Louis.

Most Frequent-Flier Miles
A northern pintail banded in September 1940 in Athabasca County, Alberta, Canada, lived until January 1954, when it was shot near Macuspana, Tabasco, Mexico. Considering the 3,000 miles between band site and death, and assuming the bird made the two-way migration each year for 13 years, the pintail would have logged nearly 80,000 migration miles during its lifetime.

The rack tallied 3075/8 Boone and Crockett Club points, making it the highest-scoring whitetail rack ever taken by a hunter.

Heaviest Whitetail
On a cold November day in 1926, Carl Lenander Jr. dropped a monstrous Minnesota buck with a single shot. Field-dressed, the deer weighed 402 pounds. The state Conservation Department calculated its live weight to be 511 pounds. No heavier whitetail deer has ever been recorded.

Widest Antlers Ever
The Irish elk, which became extinct 7,700 years ago, was the largest member of the deer family that ever lived. A mature stag stood up to 7 feet at the shoulders, could weigh more than 1,500 pounds and carried antlers that measured as much as 14 feet from tip to tip. Fossilized remains of the giant elk, including their antlers, are on display in some European museums.

Heaviest Polar Bear
A polar bear weighing 2,210 pounds was shot at Kotzebue Sound, Alaska, in 1960. Displayed at the 1962 Seattle World’s Fair, this 11-foot specimen was the largest of its kind ever documented.

Quickest Traveler
A tagged great white shark swam from South Africa to Australia and back in under a year. The female shark was tagged with a data transmitter off South Africa in November 2003. The unit detached automatically and was recovered off western Australia four months later, but the story didn’t end there. In August 2004, five months after the transmitter bobbed to the surfaceproject research scientists spotted the shark-identifiable by a pattern of notches on its dorsal fin-back in its old haunt off South Africa. It had completed a round trip of 12,500 miles in nine months.

Heftiest Retriever
Nineteenth-century English hunter Richard Toomer trained a Berkshire sow to hunt birds. Slut, as Toomer named her, could catch bird scent from 40 yards, stop and alert her owner with snorts and head shakes that game was near. When a bird was shot, she fetched it. The unusual retriever weighed 700 pounds.

Most Consecutive Rod and Reel Casts
Georgia’s Brent Olgers established a world record for the longest period of consecutive casting in July 1999. Using a Zebco 33 reel, the indefatigable Olgers cast 6,501 times in just over 24 hours.

Oldest Fishing Record
In May 1865, Dr. C.C. Abbot caught a 4-pound 3-ounce world-record yellow perch near Bordentown, N.J. His freshwater record has stood for more than 140 years, longer than any other.

Fastest Gunslinger
At South Dakota’s Lead Club Range on August 20, 1932, Ed McGivern of Montana fired a .45-caliber revolver five times from 15 feet into an area with a diameter of 1.1875 inches. He accomplished this in 0.45 seconds (including the time needed to draw the gun from his holster), and did it twice that day.

The Record for Marathon Shooting
Ohio rifleman Tom Frye was arguably the greatest shot with a .22 who ever lived. He established a marathon and accuracy world record by hitting nearly every one of 100,000 hand-tossed wooden blocks, missing only six. To accomplish this phenomenal feat, Frye banged away for nine hours a day over a 13-day period.

Largest Shooting Event
The world’s largest annual shooting tournament is the Grand American World Trapshooting Championships, conducted each August by the Amateur Trapshooting Association. At this competition, 100 trap fields set side by side stretch for 1.75 miles. Several thousand competitors (aged 8 to 80) shoot as many as 5 million clay targets during the 10-day event.

First TV Hunting Show
On December 23, 1956, viewers of NBC’s Wide Wide World saw 300,000 mallards sitting on Arkansas’s Claypool Reservoir. Suddenly, a rocket was fired over the ducks to flush them. Reservoir owner Wallace Claypool then called in ducks for 12-year-old hunter Lynn Parsons. Host Dave Garroway (also the first host of NBC’s Today show, 1952-1961) observed, “Now if you’ll brush the duck feathers off your sofa, we’ll go on with the rest of the program.”

Toughest Game Laws
Today’s game law violators get off easy compared to poachers of yesteryear. Under the French King Clovis, who died in A.D. 511, the slightest trespass into the royal hunting preserve occasioned public whipping. Poaching drew the stiffer penalty of torture on the rack, burning and finally death by decapitation.

Largest Shark Ever
Paleontologists excavating fossilized fish in England have plenty of bones to back their claim that they found the whopper of all whoppers when it comes to fish. What they discovered was a specimen of Leedsichthys problematicus, a Jurassic Age version of the basking shark. At 72 feet long, it was almost twice as long as a whale shark, which is the largest fish swimming the seas today.

Biggest Dog Ears of All Time
Basset hounds are famous for their long ears, but a German dog named Jack has taken it to extremes. The hound’s ears measure more than a foot long; in fact, Jack has trouble keeping his front paws from treading on his ears as he waddles along. Otherwise, Jack is normal: low to the ground and wearing a perpetually weary look on his face.

Rarest Game Bird
North America’s most difficult wing-shooting challenge, not to mention most expensive game meat, has to be the introduced Himalayan snowcock. These birds are hunted only at altitudes exceeding 10,000 feet and only in Nevada’s Elko County. Only 100 to 150 hunters pursue the snowcocks each year, harvesting a total of 20 to 30 birds.

Biggest Fish Ever Hooked and Landed
What may be the biggest fish ever hooked and landed was captured in Florida waters by Captain Jay Gould in 1933. It was a manta ray that measured 19 feet 9 inches from wing tip to wing tip. The huge ray was hooked on a large shark hook tied to 1,200 feet of half-inch rope, and when it had been subdued and towed back to Ft. Lauderdale, the city’s 20-ton crane had to be used to lift it from the water. The ray weighed an estimated 5,500 pounds.

Littlest Lunker
The smallest fish ever to make the record books may be the 2½-ounce pygmy whitefish hauled in from Montana’s Ashley Lake in 1982. The catch, by Orlin Iverson, stood until 1999, when Frank Gamma caught a 2Ã’Â¾-ounce pygmy whitefish from the same lake. The record now stands at almost 3½ ounces.

Fastest Fish
Anglers at Florida’s Long Key Fishing Camp came up with a simple and ingenious method for measuring a fish’s swimming speed. When a hooked fish makes a run, measure the amount of line the fish took off the spool in a certain number of seconds to calculate the speed. The fastest fish they clocked was a sailfish that took out 300 feet of line in three seconds, at a velocity of 68 mph. The speed-burning sailfish went from zero to 60 in 2.6 seconds!

Longest Canoe
You could carry lots of your friends fishing if you had access to the world’s largest canoe, the Nga Toki Matawhaorua, built in New Zealand in 1940. This unusual craft-117 feet long and 6 feet 7 inches wide-was able to accommodate 135 people.

Biggest Bunch of Migrating Squirrels
In southeastern Wisconsin in 1842, people witnessed a mass migration of gray squirrels that lasted four weeks and involved, according to one observer, nearly half a billion squirrels. The migration covered an area roughly 130 miles wide and 150 miles long. Wildlife biologists never determined what trignds are famous for their long ears, but a German dog named Jack has taken it to extremes. The hound’s ears measure more than a foot long; in fact, Jack has trouble keeping his front paws from treading on his ears as he waddles along. Otherwise, Jack is normal: low to the ground and wearing a perpetually weary look on his face.