Looking for a wild way to get your adrenaline flowing? Try hunting wild boar...with a knife! 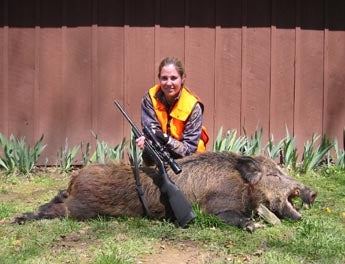 Hunting wild hogs with a knife does not actually require a low IQ, but having one sure makes the sport more enjoyable.

That was my thought as I prepared to plunge into a cypress head where four pit bulls were noisily confronting a 200-pound boar that definitely did not like dogs or humans. Of course, the dogs are the key to this whole deal. My hunting partners and I crawled under bay bush and palmetto vines. In a mud hole, the dogs and the hog engaged in an epic battle. There was a dog on each of the boar’s ears, one on one hind leg and one on the tail. And they had the hog just the way he had to be for me to jump in.

One dog had a gash up his side and another had a wound in his chest, but they seemed immune to pain. There’s nothing that could make these bulldogs happier than latching on to a hog. The hunter’s task is to cut the jugular vein without getting gored in the process. The few who practice this old style of hunting say it evolved as a way to avoid accidentally shooting the dogs.

The hog shook loose when it saw us, and for an instant it looked like we were all going to wind up treed. But before the enraged beast could get at us, the dogs piled on again and held him back. Shouting, dust flying, dogs growling, the hog raging, we did a death dance all over the mud hole. Then the knives went in.

The second the dogs felt the life go out of the boar, they released it, gave it a few victory bites and backed away-game over. We had the makings of a hog roast, and one heck of a trophy. In Florida you can hunt hogs year round on private lands with no bag or size limit. For more info, visit the Florida Fish and Wildlife Conservation site at myfwc.com