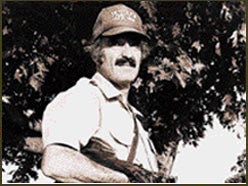 Outdoor Life has had only four Shooting Editors in its 103 years of publication. Jim Carmichel is number four. This month, he celebrates his 30th year at the magazine, an accomplishment that deserves special recognition.

What I’ve come to know about Jim Carmichel could fill a fair number of pages simply because there are so many layers to this man. For starters, he has one of the most inquisitive minds I’ve ever encountered. Perhaps it’s his background in mechanical engineering, but I can think of no other writer who attacks the subject of firearms in such a scientific way.

Many people delight in making comparisons between Carmichel and Jack O’Connor, but to me that seems foolish. There was only one Jack O’Connor, just as there was only one Charles Askins Sr. and one Townsend Whelen before him-the two Shooting Editors who preceded O’Connor. Each had his own style, personality and voice. Carmichel has his. He’s just Jim, and that’s why readers love him.

In many ways, Jim Carmichel is a throwback to a gentler era. He is every bit a Southern gentleman-artful in conversation, cordial, classy and polished. He does not tolerate petty people or idle chatter. He is highly opinionated, and that is as it should be-what else would you expect of a man who is perhaps the foremost authority on firearms and shooting? No, there’s no fence-sitting when Carmichel sits down to write.

Most readers see him merely as a gun writer, but Carmichel is much more. Humor, satire, opinion and an understated style that embraces readers rather than keeping them at arm’s length are just a few of his trademarks.

There’s a bit of Rhett Butler and no small measure of Mark Twain in Carmichel. And if you read carefully, you can hear the double-bass chuckle of his sarcasm come through when the subject calls for it. For many years Carmichel wrote a column in outdoor life called “Just Jim.” (We revived it as a sidebar starting in the last issue.) In it he shared humorous opinions on a variety of topics. He later gathered an anthology of these columns in a hardcover version that provides great insight into the many and varied levels of his writing talent. Read “The Great Jonesboro Pigeon Shoot,” and you’ll see this master storyteller at his best.

Carmichel never talks down to his readers. Instead, he involves them. If it’s a complex ballistics equation he’s expounding on, he’ll often ask us to hearken back to our high-school math class to make the concept come easily into focus. That takes sensitivity to the subject as well as to the readership. Many writers get lazy with age, but not Carmichel. His wit still cuts like a razor, and like a good Bordeaux that has taken time to round into perfection, his writing is something to savor.

His office sits at the top of a long flight of brown-linoleum stairs, just off Main Street in downtown Johnson City, Tenn. It is a small suite of rooms filled with all sorts of gunny things, from models of German artillery bunkers to vintage cartridge boards. And everywhere there are books on firearms. It’s cozy and quiet-the sort of place where Edison might have invented the light bulb. It smells like old books and spent shotshells and there is an air of history about the place.

At the end of a long corridor, dozens of file boxes are stacked ceiling high. “These are my correspondence files,” Carmichel says with pride. “I’ve answered every letter that’s ever been written to me.” That’s when you suddenly realize that outdoor life isn’t just a job to this man, it’s his life. The two are inextricably linked, and neither one would be the same without the other. Perhaps most wonderful of all, however, is that despite being the icon he has become, Carmichel remains “just Jim,” right down to answering his own mail.

Oh, he’ll bristle when he reads this, for he would never willingly allow such attention to be drawn to himselff. But I hope he’ll understand that this is written out of respect, esteem and, most important, friendship. Happy anniversary, Jim.