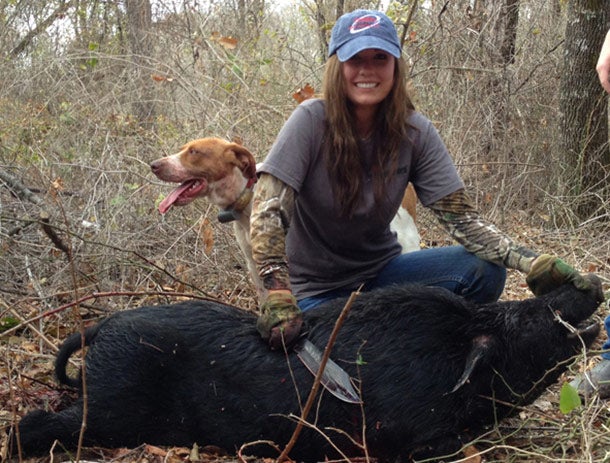 Sara Flanagan is not your traditional Texas hog hunter. She weighs 110 pounds, measures 5 feet 4 inches tall, and describes herself as a true “girly-girl.” But don’t let that fool you. This 23-year-old Oklahoma native hunts feral hogs with the best of them, tracking pigs across the countryside with a pack of hounds and a sharpened bowie knife.

For the past four and a half years Flanagan has hunted the invasive animals in Texas and Oklahoma with her husband, friends, and a band of eager dogs. The unusual factor in this scenario is her tool of choice. Flanagan spends most weekends trailing hogs for miles, trying to eradicate the pests with a few well-placed jabs.

Seem weird? You’re not the only one who thinks this form of hog hunting sounds strange. Flanagan says many locals rely on dogs to track pigs, but it’s rare to finish the hunt with a blade. Most of the pigs she tackles dwarf her in size; Sometimes the hogs are so huge her feet don’t even touch the ground. So the question is, what would possess someone to wade through a pack of excited hounds and jump on the back of a feral hog? For Flanagan, it’s the adrenaline rush.

“Anybody has the ability to go out there and shoot a gun,” Flanagan said. “I think it takes more guts to be able to get on the back of a hog and have that interaction. And to me, there’s more satisfaction that it’s you versus the hog. It’s more of a fair game…and I think it’s more challenging.”

Apart from the thrill, Flanagan seeks to help control the south’s rampant swine problem. In Texas the feral hog population ranges anywhere from 2.5 to 4 million pigs statewide, according to estimates from the Texas Parks and Wildlife Department. This is old news to Texans, who have been struggling with the invasive animals for years. Local landowners frequently contact Flanagan with requests to come kill pigs on their property.

Despite its relative obscurity, knife hunting has proven an effective method for Flanagan. By rough estimates, she and her husband have killed as many as 75 pigs since they started knife hunting nearly five years ago, once taking up to 10 in a single day. What started as an offhand joke quickly turned into a passionate pastime for Flanagan. A family friend and hog guide teased Flanagan once, asking if she wanted to stab a hog sometime. Her response? Absolutely.

“I’ll pretty much do anything, just to be able to step outside of my comfort zone,” Flanagan said.

Flanagan and her husband, Dustin Flanagan, hiked a total of 12 miles on their first hunt. She was determined to jump a huge hog the first chance she got, but their guide wasn’t comfortable letting her tackle the 350-pounder the dogs cornered. They returned the following week, and this time the hounds bayed a smaller pig. Flanagan decided to try her luck.

“I was pretty confident, but once we bayed up on a pig I was in shock,” Flanagan said about the hunt. “Like, ‘Oh my gosh it’s here. Make it or break it.'”

Her friend had coached her in advance, and they released the catch dog. Flanagan readied her knife and waded into the circle of hounds. She swung one leg over the pig’s back and grabbed the coarse bristles between its shoulder blades.

“She’d been set on killing this 300-pound boar her first time, and that little 125-pound pig took her for a ride,” Dustin Flanagan said. “Just dragging her around and all that, dragging her through trees. She was just worn out by the end of that first one and she kind of had to stop and take a breather. And after that it was just game on.”

Flanagan seized on the hunting lifestyle and hasn’t looked back. She now splits her time between her current home on the outskirts of Dallas and her hometown of Marietta, Okla., located just north of the Texas-Oklahoma border. Although she was raised in the outdoors, Flanagan’s family doesn’t hunt. As a girl she mystified her parents by asking for a BB gun, and her father even tried joining Flanagan on her first hog hunt. He hated it. She couldn’t get enough.

Flanagan’s introduction to hunting came in high school when she and Dustin started dating. Dustin hunted throughout his childhood, and Sara began tagging along on his hunts. She soon developed a love of guns, and eventually tried hunting herself. The couple started small with squirrels and worked their way up to bigger game.

Dustin was hunting hogs by the age of 10, but he learned to knife hunt right alongside Sara. “It’s a lot of fun for me to do it, but honestly as small as she is and as girly as she is, she just has this passion for it,” Dustin said. “I’m kind of the camera man now. It’s awesome for me to go out there and kill one, but watching her do it? I mean there’s just nothing like it.”

Despite the ostensible hazards of riding wild hogs, Flanagan has so far avoided any serious injuries. Her knuckles are scarred from grabbing at neck bristles, and she’s endured some nasty poison ivy. Scratches are unavoidable when scrambling through thickets on a regular basis, but she covers up and wears gloves when she can.

“I can’t tell you how many times I’ve been on my hands and knees crawling with a knife in my hand through a thicket and come out a bloody mess after killing a hog,” Flanagan said. “It’s real hunting. And to me, it’s either you or the pig.”

Flanagan and her husband would hunt hogs every weekend if they could, but they concentrate their hunts in the spring and summer. Although Flanagan says hogging is her first passion, she has developed a love of archery within the past year. Dustin’s grandfather works as a bowyer in Texas, and the two recently crafted a longbow of purple heart and red cedar as a gift for Sara. Dustin hopes to take her bowhunting for turkey in the spring.

In addition to archery, Flanagan fishes and bowfishes. She takes advantage of the nearby Red River and recently traveled to Broken Bow, Okla. to fish for rainbow and brown trout. She and her husband also plan to begin managing their land for the deer population. As for the hogs, Flanagan is currently searching for a way to share her hog hunting with others. She wants to establish a system for donating the meat, and even has aspirations for a television show.

“She’s just one of those people,” Dustin said. “Anything that’s a challenge, she’s game for it. Whatever window opens up next, I’m sure we’ll go for it. I’ll support her if it’s anything I haven’t done, and if I need to learn it too. [There’s] no telling what’s next.”

In the meantime, Flanagan says she just wants to get outside and encourage others to do the same. “I can’t get enough of the outdoors,” Flanagan said. “It’s what keeps me sane.”