If the Potomac River had a post office, the northern snakehead’s photos would be plastered front and center on its … Continued 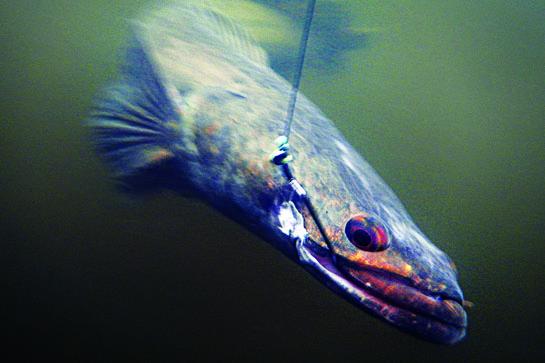 If the Potomac River had a post office, the northern snakehead’s photos would be plastered front and center on its bulletin board. Instead, Maryland’s Department of Natural Resources offers a bounty for this vile invader, whose prolific expansion and voracious appetite have painted a big bull’s-eye on its camouflaged back.

Joining the U.S. Fish and Wildlife Service and the Potomac River Fisheries Commission to promote the killing of snakeheads for research and environmental benefit, the Maryland DNR is offering anglers who catch these invasive predators the chance to win a $200 gift card from Bass Pro Shops; a Potomac River Fisheries Commission fishing license; or discounted use of state park facilities.

To enter, anglers submit catch details and a photo of their dead snakehead through the DNR Angler’s Log. DNR staff will randomly draw the winner on November 30, 2012, if there is a tie.

“We don’t expect that anglers will eradicate the snakehead population,” says Joe Love, DNR Tidal Bass program manager. “We do believe this promotion and inspiration of anglers can help control the snakehead population. The information we gain from the Angler’s Log reports is also helpful in assessing the abundance, spread, and impact of these feisty fish.”

Keep in mind that it’s illegal to possess a live northern snakehead anywhere in the U.S. or to transport them into the country or across state lines.

How to Catch Them
Snakeheads often intercept baits intended for bass, leaving tournament fishermen lamenting their inability to work key shallow-water habitat like grass beds, lily pads, and docks without hooking the ravenous pests. Waging war against this unsightly nuisance, Potomac anglers like Capt. Steve Chaconas take the fight to the snakeheads by targeting them in the shallow vegetation where these ambush masters lie in wait, bodies submerged, heads peeking through the weeds. Chaconas catches snakeheads by flipping a 4-inch Mizmo tube on a Mustad 3/0 Ultra Point tube hook, but he favors the unbridled fury that comes with a topwater frog bite.

“They will fly out of cover to nail a topwater [bait], sometimes slashing and missing and returning to nail it,” says Chaconas, who favors a Mann’s black Super Frog. “Then it’s like trying to pull a dog off a fire hydrant. They undulate like a snake and try to back up, thrashing at the surface the entire time once you get them near the boat.”

On the Table
Also a fan of this ferocity, Chef Chad Wells of Baltimore’s Alewife Restaurant not only specializes in snakehead dishes, but he also helps organize a tournament aimed at encouraging the species’ eradication by promoting its value as both a sport fish and table fare. Open to hook-and-line or bowfishing tactics, the daylong event includes sampling snakehead cuisine.

“The sport-fishing thing is where it’s at,” Wells says. “They’re a great sport fish and food fish.”

Some may never warm up to handling, much less eating, these ghastly pests, but catch-and-release is not an option. Snakeheads have staked their Potomac claim, and they aren’t leaving unless anglers show them the fillet table. And judging from a June tournament on the Potomac, anglers are happy to oblige. More than 1,400 pounds of snakehead were caught.