As the world’s premier fishing tournament, the Bassmaster Classic sets trends for anglers across the country. Not only has it... 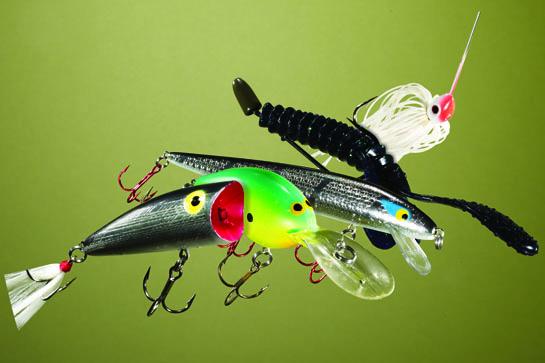 As the world’s premier fishing tournament, the Bassmaster Classic sets trends for anglers across the country. Not only has it created fishing stars since the inaugural championship in 1971, but boats, motors, electronics, rods, reels, and lines have all benefited from appearing on the sport’s biggest stage. It’s why sponsors pay anglers to fish with their gear and why manufacturers buy advertisements to spread the word about their success in this biggest tournament.

That influence is frequently referred to as “the Classic effect,” and nowhere is it more prevalent than with fishing lures. To the fishing public, much of the credit for winning the championship goes to the bass lure on the end of the winner’s line. Who makes it, the sizes and colors it comes in, and whether or not it’s available at the local tackle emporium are what matter most to anglers.

What’s Hot, What’s Not
To an extent, the Bassmaster Classic not only establishes trends by making certain lures or bait types popular, but it also can breathe new life into old tactics. Carolina rigging, for example, had been around since the 1950s, but it was a runner-up finish by Bill Dance in 1973 and a Classic win by Jack Chancellor in 1985 that ultimately put the rig in everyone’s boat.

Certain manufacturers have played leading roles at the Bassmaster Classic, too, getting their baits in the winner’s circle more often than any others. Whether that’s due to the superiority of their products or the professional anglers they sponsor is debatable, but there’s no denying their success.

Strike King leads the way among Classic winning lures, contributing to seven championships. Mann’s Bait Company is second, with five titles from 1973 to 2006. Bagley, Berkley, and Bomber each notched parts of four wins.

The only lure to find itself on the business end of the Classic champ’s line for three consecutive years is the Fleck Weed Wader spinnerbait. Tommy Martin in 1974, Jack Hains in 1975, and Rick Clunn in 1976 all credited the Weed Wader with part of their winning catches.

Clunn was a relative unknown when he won his first Classic in 1976. Fishing the Weed Wader just under the surface of a milfoil-covered hump on Lake Guntersville, his Day 2 catch of 10 bass weighing 33 pounds 5 ounces gave him a lead he never relinquished. It’s still the heaviest catch ever weighed in at a Classic, though the creel limit is now five bass.

On the same day as Clunn’s big catch, Arkansas pro Ricky Green (who finished third in that Classic) weighed in an 8-pound 9-ounce largemouth that fell to a Strike King spinnerbait and stood as the biggest bass in Classic history for 30 years.

‘Twas The Season
For the first 12 years of its existence, the Bassmaster Classic was a fall tournament fished between late September and early November. Beginning in 1983, the Classic became a summertime event, fished between late July and late August, usually held in the Deep South or along the Mid-Atlantic. Then, in 2006, the Classic was moved to February and has been held on waters in the South until this year, when it will be held on Oklahoma’s Grand Lake o’ the Cherokees this month.

Crankbaits and spinnerbaits accounted for the most championships when the Classic was held in the fall. As a summer event, focus shifted to plastic worms and deeper diving crankbaits. .

Most often, the lure type used by the winner is simply the best tool for the job. Following is a look at some of the lures and tactics that have revolutionized bass fishing in the past. What’s in store for the next Classic? In the upcoming Classic, pros and pundits alike are expecting jerkbaits to take center stage. Let the countdown begin.