FISH AMERICA: Too Much Ain’t Enough

One night this past week, I found myself pulling into a parking lot in Vermont at about midnight for a... 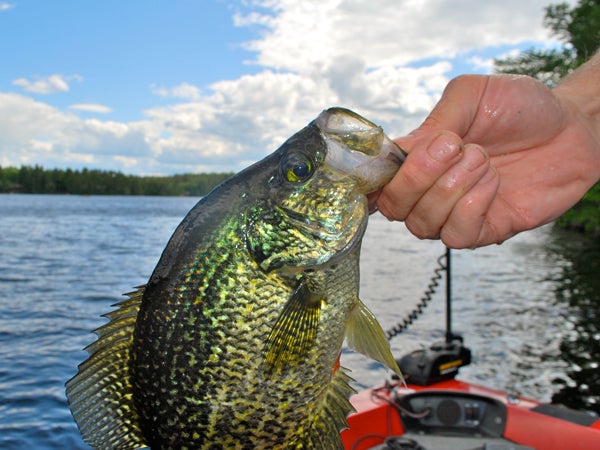 One night this past week, I found myself pulling into a parking lot in Vermont at about midnight for a few hours sleep. I just couldn’t stay on the road any longer. I got a few hours of shuteye on my way up to Lake Champlain without getting hassled, and I was back on my way.

I was sunburnt to a crisp and I’d spent 13 hours on the water. It all started at 5:30 a.m., when I woke up to meet Mark Beauchesne to fish lake Winnipesaukee in New Hampshire. I’d gotten four hours sleep at a campground the night before.

Winnipesaukee has a renowned landlocked salmon and lake trout fishery, but that’s not what Mark and I were after. We were targeting everything else, and we succeeded. Between 7 a.m. and 3 p.m., we caught smallmouth bass on topwater poppers, largemouth under overhanging brush, pickerel in the weeds, bluegill and sunfish hanging under lily pads, and crappies hanging off a rock wall.

It was about 2:30 p.m., and I was fairly beat, but we had found the crappies we were looking for, so we couldn’t leave. Then Mark got a call from a friend, Glen Leathers, the operator of Island Charters on Lake Winnipesaukee. Glen was running a salmon trip later that night and had an extra spot. The trip would leave at 5 p.m., and they wanted to know if I wanted in.

The week prior, I was at Weatherby’s Lodge in Grand Lake Stream, Maine, and at 7 a.m., Jeff McEvoy, the owner of the lodge, told me there was an extra seat on a canoe headed onto the lake. I wasn’t originally scheduled to fish, but there it was, an open seat. The only problem was that the forecast called for downpours.

These two seemingly unrelated situations have one thing in common. They leave you with the question: to fish or not to fish? Now, it’s one thing if it’s your boat and you’re considering gas costs, or if it requires a day off work. And if it’s shore fishing, you can wait out the weather, but if it’s a free ride for a shot at fish, when can you turn it down and not avoid your own reflection while brushing your teeth the next morning?

I can’t remember ever being as wet as I was in that canoe in Grand Lake Stream two weeks ago, my “waterproof” jacket and pants soaked straight through by the downpour, as we used Tupperware to bail out the canoe between casts. Or as tired as I was driving from New Hampshire into Vermont, with both windows open and the music up to stay awake.

But I have my largest landlocked salmon to date to show for it, and we caught smallmouths despite the rain, so I’ll ask you: do you ever turn down a fishing trip, and when is it excusable?