Fishing isn’t about breaking records. But, even the purest of heart admit that having your name attached to a world... 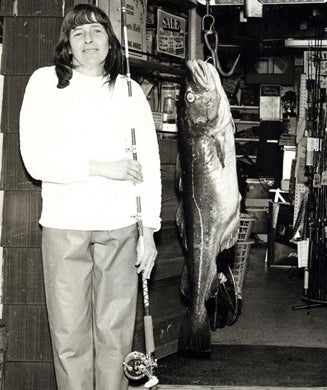 Fishing isn’t about breaking records. But, even the purest of heart admit that having your name attached to a world record fish is an attractive proposition.

But achieving angling immortality is a lifetime quest, one rewarded only to the most passionate and skilled anglers, right? Well, not really. For the careful observer of current standing records, placing your name among the greats could be easier than you might think. Here are 10 angling records that are just begging to be broken. Get out there and rewrite the books. Thanks to the IGFA for providing the photos of the following records.

Why it’s breakable: Any Great Lakes angler worth his salt can tell you that there are an abundance of 20-plus-pound browns around during the spring and fall. There is no doubt that browns larger than Mr. Herou’s fish have been caught, and many on 30-pound-test line. However, no one has bothered to submit an official specimen for the record books.

How to do it: Head to Ludington, Mich., where Glen Buehner of Raptor Charters has the drop on big browns. Buehner, who has been guiding on Lake Michigan for more than a decade, says the water between 45 and 55 feet concentrates browns in the summer months. Troll orange spoons with 30-pound-test, have an accurate scale on hand, and you could very well shatter a standing world record. Here are some more great grand slams.

The trick: Early and mid-Spring are prime times for big browns on Michigan.

Why it’s breakable: This record isn’t even a year old and it’s poised to fall. Most people targeting tiger muskie, or even fishing in lakes that they inhabit, are fishing between 10- and 20-pound-test line. But that doesn’t mean that with a little finesse, you can’t go light. True, this record will take some skill and patience to break, but it’s definitely doable.

How to Do It: Head to the St. Lawrence River in Upstate New York. The lake has given up the world-record tiger muskie in two line-class categories, and both fish were 30 pounds-plus. Bladed baits, soft-plastics, and minnow-style plugs in perch patterns will all entice a tiger to strike. The challenge will come after the strike, when playing the fish carefully and skillfully will be the key to breaking the record.

The trick: Give yourself an advantage by targeting tigers in lightly weeded areas and staying away from strong current; both could make landing a 20-pound tiger on 6-pound test tough.

Why it’s breakable: We can’t believe this record has stood since 1995. Don’t get us wrong; a 2-pound bullhead is a respectable fish. But as one of the most popular fish for youngsters to chase with light tackle, we know that there have been bigger bulls bested on 8-pound-test.

How to do it: No need to get fancy for this one. Throw on a gob of nightcrawlers and hit the water after sundown. Any place where bullheads abound should give you a crack at this record, and Lake George isn’t a bad place to start.

The trick: Fish after sundown for the biggest bullheads.

Record-holder: Dr. Daniel O’Keefe with a 5-pound, 12-ounce sea bass caught off the coast of Martha’s Vineyard in 2001.

Why it’s breakable: A 5-plus-pound sea bass is nothing to sneeze at, and will make for one delicious meal. But there will be plenty of 6-plus-pound bass around the reefs and wrecks in the Northeast this fall. It’s true that anglers rarely scale down to tackle as light as 6-pound-test monofilament for these fish, who are notorious for bulldogging their way to the boat, but it’s more than possible to take a big sea bass on light gear with some finesse and skill.

How to do it: Concentrate on structure and search out schools of sea bass and scup that move up into shallower water as the fall brings cooler weather. A green jig anywhere between one and two ounces, depending on current, will do the trick. Tip your bucktail with either squid or Gulp!

The trick: Remember, the most important part of bringing a big sea bass aboard the boat on light tackle is a good net man.

Record-holder: Lillian Labrie, with a 34-pound cod caught off the coast of Massachusetts in 1980.

Why it’s breakable: There are a handful of reasons this record has likely stood for more than three decades. First, braided line is increasingly popular among groundfishermen in the salt. Secondly, everyone will readily admit that the glory days of enormous cod are behind us. Lastly, the best cod fishing days aren’t necessarily the most inviting, and even the most hardcore male anglers can be found sharpening hooks at home rather than pounding the cod grounds. Having said that, 40-pound cod are not a thing of the past, and let’s face it, these fish aren’t renowned for their fighting prowess, so tangling with a 40-pound cod on 12-pound test is more than feasible.

How to do it: Rig up a conventional saltwater outfit with 12-pound test and get an assortment of Cod Bombs and jigs. Pick a calm day in the spring and head out of Gloucester, Mass. Shoot for a day with little wind, so you won’t need much weight to fight the current. Play each fish carefully and when you break the record, proceed to remind your significant other of it at every possible opportunity.

The Trick: Remember, don’t lean the rod on the rail as you fight the fish.

Why it’s breakable: It’s true that most ladyfish you catch will be somewhere between 1 and 3 pounds, but don’t fool yourself: these acrobatic miniature tarpon can grow as large as 15 pounds. Six-plus-pound fish have been landed in Florida, but the biggest ladyfish seem to come off the coast of eastern Africa, where ladyfish up to 15 pounds have been caught. But you don’t have to travel to Madagascar to break this one. Five ladyfish of 4 pounds or more currently hold places in the record books from Florida. We’re guessing not too many anglers have world records on the brain when they’re battling these ubiquitous game fish, and it’s likely that several 5-pounders have been released. We like this record because we imagine fighting a 5-pound ladyfish is about as fun as it gets in the single-digit weight class.

How to do it: Florida’s west coast down through the Keys is home to a thriving ladyfish population. From Marco Island down to Key West, a shrimp-tipped bucktail cast with 12-pound test should put you into some big ladies in no time.

The trick: The most difficult part of breaking this record will be keeping tight to these airborne silver speedsters when they break the surface.

Why it’s breakable: Any bass fisherman worth his salt has tangled with a slimy set of teeth known as the chain pickerel. For all of the broken lines, bent spinnerbaits, and shredded soft-plastics, why not redeem a little glory? When I saw this record, my mind drifted back to some of the larger pickerel I’d caught and released, some of which I’m sure would have at least given this record a run for its money. Have a tape measure handy the next time you hit the water and you could unseat Mr. Winters, who broke this record in February of last year.

How to do it: Pick your favorite weed-choked pickerel pond and get started. The late summer months are a great time to throw any number of soft-plastics or plugs for pickerel. Your best bet will be a Texas-rigged soft-plastic worm or a big spinnerbait. If you’re truly intent on breaking this record, it might be the first time you’ll be disappointed with a largemouth bass. And the last.

The trick: Because this isn’t a line-class record, you don’t need to worry about your gear. Bring a stout casting rod and at least 20-pound-test line so you’ll be able to muscle these fish out of thick vegetation.

Record-holder: Martin Arostegui, with a 36-inch bonnethead caught in South Carolina in 2011.

Why it’s breakable: With all due respect to Mr. Arostegui, this isn’t much of a record at all. It’s more of a testament to how quickly anglers return this writhing toothy critter to the ocean when they find one on the end of their line. Bonnethead sharks can grow as long as 5 feet and are ubiquitous in the southern Atlantic. They won’t be erecting a statue of you in Cape Hatteras when you shatter this record, but hey, a record’s a record, right?

How to do it: Pay attention. If you do much saltwater fishing, it’s likely you’ve caught a bunch of bonnetheads that are about this size. The next time you think you’ve got one pushing 37 inches, stretch the tape. Bonnetheads are aggressive sharks that will attack any number of lures or live bait presentations.

The trick: Living down your world record when buddies needle you for it. Still, you can proudly tell your friends that don’t know better that you caught a world-record shark.

Why it’s breakable: It’s very likely there are hundreds of “record-breaking” bluegills swimming within a mile of you right now, unless you’re reading this from Alcatraz. This fun record is one you or your kids can break in your own backyard.

How to break it: We’re not thinking there’s any secret to targeting 10-inch bluegills as opposed, say, to the 7-inch variety. Grab a light spinning outfit, some small curly-tail jigs in yellow or black, and target weedbeds or wooded structure in your local farm pond. When you tie into that monster 10-incher, don’t lose your cool.

The trick: Get a rough estimate of the distance between your pinky and thumb when they’re outstretched. This rough measuring device will save you time when you estimate just how close you are to breaking the record with each ‘gill you land.