Go Shallow: How to Catch Walleyes in the Weeds

It would have been easy to write it off as a fluke, but I guess whenever a 6-pound walleye smacks... 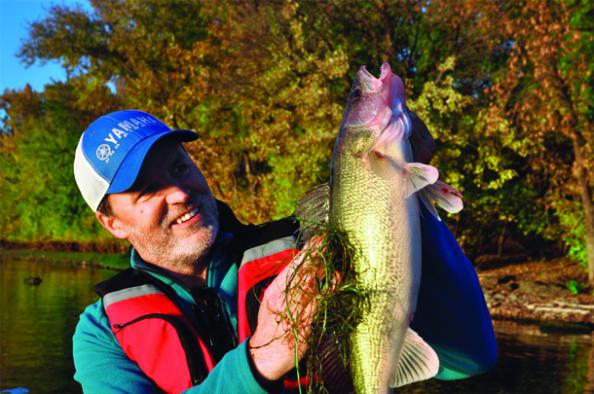 It would have been easy to write it off as a fluke, but I guess whenever a 6-pound walleye smacks your swim jig, you tend to pay attention. When it’s mid-June, and you’re fishing in less than 4 feet of water, you begin to do some serious pondering. Replicating the feat a week later on a different lake–landing a two-man limit at midday in water so shallow we could see the bottom–well, that’s when most anglers would think that they might really be on to something.

As someone who grew up in the heart of Midwest walleye country, I still find it hard to embrace the idea that the best place to catch walleyes today isn’t always the mid-lake structure I’ve fished for decades. But fishing conditions have changed.

Consider this:
• Unpressured walleyes are the easiest to catch.
• Classic walleye structure is so easy to find with today’s insanely good GPS/mapping units that top-­producing areas in most lakes get fished daily. Walleyes respond to this pressure by moving off the structure to secondary areas, where fewer anglers target them.
• A percentage of the walleye population in a given lake may never move to mid-lake structure, particularly if the lake offers good weed growth. These areas are nearly impossible to fish with traditional walleye presentations like the live-bait rig.

Where to start
These fish are typically shallow and generally relate to weeds. In stained lakes with poor visibility, look in 4 to 8 feet of water, even in mid-summer. In clearer lakes, the prime depth zone in June is 8 to 12 feet. Weed flats, particularly those close to spawning areas, are best early in the season. Fish in these areas are spooky, so use your trolling motor to move in or you’ll blow the fish out. Expect walleyes to be scattered across the flat but grouped in small wolf packs of four to eight fish. The key is using baits that allow you to cover water fast–and that means artificials.

Hot Baits
Light jigs–1/32-, 1/16-, and ¼-ounce–are tough to beat, particularly when tipped with a small swimbait or a 2- to 3-inch swimming grub, like the original Power Grub from Berkley. My favorite colors include black, natural chartreuse, and smoke/black glitter. If you feel more confident with live bait, tip the jig with a piece of nightcrawler. If there are two or more of you in the boat, each angler should fish a different-color bait until the fish tell you what they want on a specific day. The standard lift-drop jig stroke is deadly, but don’t be afraid to rip the bait aggressively if you’re on active fish. Long casts are the key when you’re fishing sparse weeds. A superline, like Nanofil in 8-pound-test, makes long casts effortless. Add an 18-inch leader of fluorocarbon if you are concerned about line visibility.

Shad-imitating crankbaits, like the Shad Rap or Flicker Shad, are also deadly on shallow walleyes, particularly in low light or heavy wind. Add numerous twitches with your rod tip on every cast or trolling pass and your buddies will wonder why you’re catching the most fish. Smaller baits, like the size 5, are best in shallow areas, but deeper-running 6s and 7s are better on the outer edges of the weeds. My favorite color on the lakes I fish is black/gold, but hot pink and chartreuse/pearl are deadly, too.

The secret to success today is zigging when other anglers are zagging. So leave the mid-lake stuff to the other guys and enjoy a little breathing room. The opportunity to target unpressured fish can be a lot easier to find than you think.