Are Stripers on the Brink Again?

Photo by: Ruben Perez Atlantic striped bass stocks may be in trouble again, as they were in the early ’80s.... 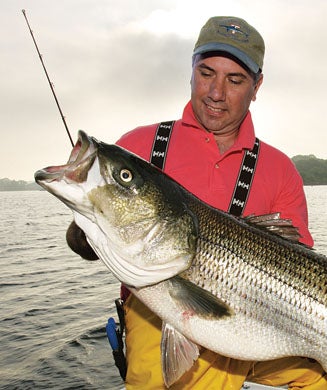 Atlantic striped bass stocks may be in trouble again, as they were in the early ’80s. Then, the Atlantic Striped Bass Conservation Act (1984) established a unique state-based, federally backed management regime that successfully rebuilt depleted populations. But now, spawning stock numbers have been in slow decline again since reaching an astronomical level in 2004.

These fish are highly managed and regulated. Every state in the Atlantic States Marine Fisheries Commission (ASMFC) has been conducting abundance surveys and tagging programs for decades, and we know more about the stock size and age composition of striped bass than possibly any other fish species. Yet the complexity of their life history makes developing management regimes difficult.

Stripers are long-lived (up to 30 years) and slow to mature, and they spawn in freshwater rivers, where environmental conditions have a major impact on spawning success. The rivers feeding Chesapeake Bay produce between 65 and 75 percent of the Atlantic coastal stock, so spawning success there is extremely important for maintaining a healthy coastwide population.

There was overall strong spawning success there from 1993 through 2003, with slightly lower levels from 2004 through 2010. The spawning stock biomass (SSB) peaked in 2004 at an estimated 80,000 metric tons of fish and has declined to about 60,000 metric tons today. Back in the bad old days, the SSB was estimated to be less than 5,000 metric tons, so there are plenty of spawners available. In fact, the young-of-the-year (YOY) index for 2010 was the fifth highest since 1970, but for 2011 it was one of the lowest, and 2012’s was slightly under the median. Scientists haven’t been able to pinpoint specific environmental problems that are responsible, and there is growing suspicion that angler harvest of 40-plus-inch bass has played a role. The current assessment indicates that the SSB is large enough to sustain the stocks, the stocks are not currently overfished, and fishing mortality has already been declining over the past few years.

So, yes, there is reason for concern, but there is not yet reason to panic. The stocks are much larger than they were prior to the Atlantic Striped Bass Conservation Act, and the scientists and managers at the ASMFC are on the case. A new addendum to the Striped Bass Fisheries Management Plan to reduce fishing mortality is in the works. A spate of possible regulatory actions will be presented by the time this is in print; a public comment period ran through July. The addendum should be made final at the ASMFC August meeting, with implementation likely occurring in January 2015.