One of the interesting items introduced at ICAST was the Reins Sliding Football Sinker, shown here with a Reins Punching... 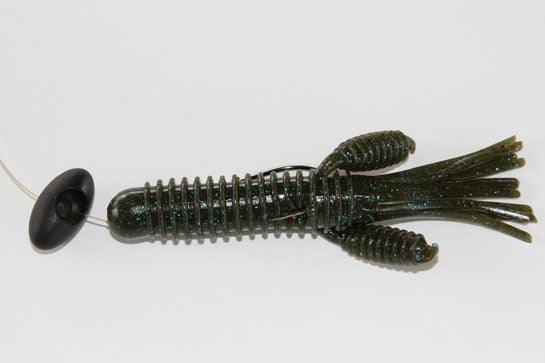 One of the interesting items introduced at ICAST was the Reins Sliding Football Sinker, shown here with a Reins Punching Predator.
Photo by David A. Brown

It’s no secret that a lot of what hits the fishing industry is made to catch as much fishermen as fish. However, each year the International Convention of Allied Sportfishing Trades (ICAST) shows us a handful of items that make us go “Hmmm.”

That reaction means different things for different people, but during the first day of ICAST at the Orange County Convention Center in Orlando, Fla., a handful of items caught my eye. (In fairness, my overall mission focused on soft plastic lures, so that’s where my examples will come from.)

Based on a 3D scan of a real eel, the hard plastic head hitches to replaceable tails. (I’m thinking stripers?)

Gill Bone
Many of the soft plastics used for flipping, pitching, dragging, etc. are made to resemble baitfish. Japan Import Tackle brings us one that actually looks like a fish – at least the skeleton of one. Indeed, a thin neck area accommodates a hook, with a skeletal form comprising the rest. (Apparently, skeletons don’t frighten fish as much as they did me during various horror films from my youth.)

Fairpoint ShadTeez 27 cm
A real work of art, this big swimbait sports a molded head, gills and fins, along with realistic eyes. The hand-painted bait also includes a double layer of clear coating for a realistic fish-slime appearance.

Made to go where squarebill crankbaits don’t typically tread, the KJ Crank features a soft plastic body and double hook similar to a topwater frog. An aft attachment offers to option of adding a treble for fishing open water.

And a couple of accessories/terminal tackle:

Zappu Pera R
A small prop with a wire coil that screws into the end of most any soft plastic. Two benefits here: First, adding a small prop to a subsurface bait taps into the popular spy baiting technique of the hard bait world.

Reins Sliding Football Sinker (pictured at top)
Most weights slide onto the line vertically, but this one has a hole drilled through it laterally. This allows you to achieve a football head package without the jig. A groove in one side of the weight allows it to settle neatly atop a Texas-rigged bait.