Monster Pacific Halibut Will Not Qualify for IGFA World Record

Although an enormous Pacific halibut caught in the Alaskan panhandle port of Gustavus is one of the largest landed in... 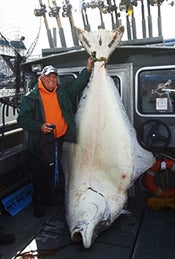 Although an enormous Pacific halibut caught in the Alaskan panhandle port of Gustavus is one of the largest landed in the Pacific Ocean in a decade, it will not make the record books.

The 482-pound fish surpassed the previous 1996 record of 459 pounds, also caught in Alaska. But 77-year-old Jack McGuire lost his chance at the top spot in the IGFA record book when he asked for help during the half-hour fight and Captain Rye Phillips shot and harpooned the fish before hauling it in.

The IGFA will not qualify a catch if the angler receieved aid or used any tool besides a gaff or net.

“I think if [Capt. Rye Phillips] had known how big it was, he wouldn’t have shot it,” Deep Blue Charters manager Andy Martin told the Alaska Dispatch. Martin is Phillips’ employer.

McGuire’s halibut isn’t the only Alaskan fish to miss the record book. Two halibut caught in July 2011 were estimated at 466 pounds each, according to the Alaska Dispatch. Unfortunately neither of the communities where the fish were caught had big enough scales to officially weigh them.

With or without the world record, Martin is confident that McGuire was thrilled with his catch. “This was definitely the fish of a lifetime for him,” Martin told the newspaper.