Conservative commentator Glenn Beck and former U.S. Speaker of the House Newt Gingrich wowed the audience with their keynote addresses... 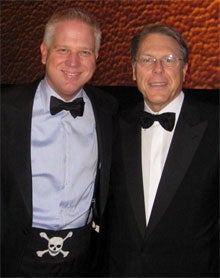 Here are some highlights:

On Elena Kagan, President Obama’s Supreme Court nominee, for her efforts to bar military recruiters from campus while she was dean at Harvard Law School:

“That is an act so unbecoming an American that she should be disqualified.”

“Your mission is to organize at every level and to simply, decisively beat all of the (lberal-leaning candidates) and get this country back on track.”

“We have to think of something, because the Titanic is going down. We need to save the passengers, that’s what we need to worry about. Let the ship sink if we have to. We have a great plan: It’s called the Constitution, and we’ll build another one.”

“Our faith is down. Our churches are emptying. Do you know why? Because our churches don’t stand for anything anymore.”

“Now who did they blame? World War II and the fascists came in, Adolf Hitler came in, because the Germans looked at the Jewish banker. Then they also looked at, who else? Oh, France. France and Great Britain. They forced them to pay – at our bidding. We, through Woodrow Wilson said, ‘Make ’em pay. Make ’em pay.’ And France said ‘Make ’em pay.'”

“I’m a self-educated man, and proud of it. If you have a Harvard degree, or a law degree from Yale or Princeton, what the hell do I care? What difference does that make? I can sit down with the best of them one-on-one.”