You’ve just been forced to use your concealed-carry semi-auto handgun to defend against a violent attack. The assault has stopped,... 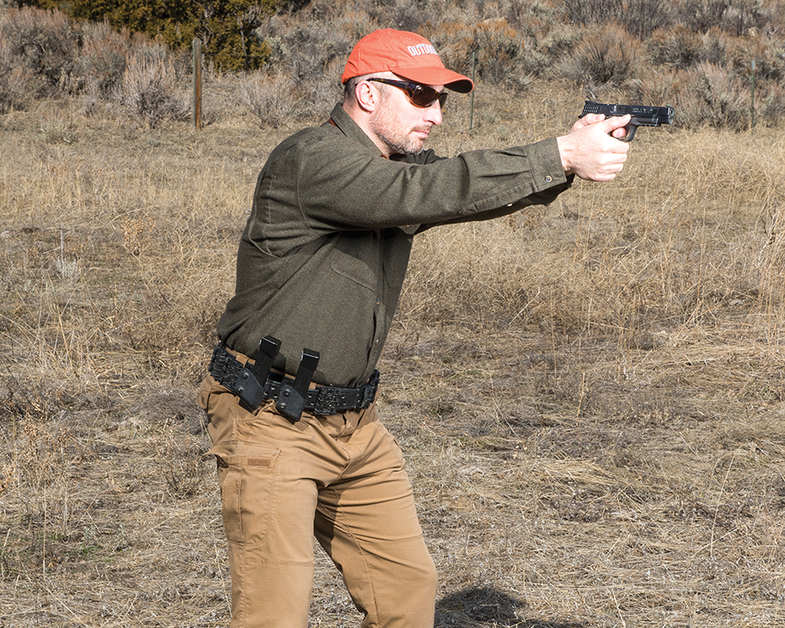 You’ve just been forced to use your concealed-carry semi-auto handgun to defend against a violent attack. The assault has stopped, but you don’t know how many attackers might remain. Nor do you remember how many rounds you’ve fired. Getting a full magazine into your gun right now, while retaining the partially filled magazine in case you need it later, would be smart. There are two techniques that can help you do that: the Tactical Reload (TR) and the Reload With Retention (RWR).

A Complex Option
The TR requires the shooter to bring the new magazine to the gun, eject the partial magazine into the same hand, then insert the new magazine into the gun while stowing the partial. This complex maneuver—juggling two magazines in the same hand, quickly and under stress—requires much practice and is an invitation to drop one or both, especially with large double-stack magazines. It also requires that the magazine drop freely from the gun with the touch of a release button. Not all do, making the TR a poor choice with some handgun models.

Those who wear pants and carry spare magazines in a belt holder on their weak side will find the weak-side front pants or cargo pocket an effective place. Shove the partial mag into the pocket and the empty hand coming out is perfectly positioned to grab the spare. Or, tuck it in the waistband near the spare. If you keep the spare in a purse or fanny pack, that’s the logical place for the partial to go, right next to the spare. Some military Special Operations troops far from resupply simply drop their rifle magazines down the front of their shirt. That can work for handgun mags too.

Many self-defense experts consider the RWR to be more foolproof than the TR. It uses simple, positive movements that are already a part of any shooter’s skill set, requires handling only one magazine at a time, and works with any semi-auto. In fact, IDPA matches sometimes require this type of reload, and while both the TR and the RWR are allowed, the vast majority of competitors use the RWR. Experience has shown it is more reliable under stress and actually faster at getting both hands into a shooting grip on a recharged gun.

Drill to Master the RWR
Start at home in normal street attire, with an empty gun and unloaded magazines. Determine where you want the partial to go in relation to where you normally carry your spare magazines. Practice stripping the magazine from the gun, stowing it there, and getting the new magazine into the gun. Once those movements become fluid, move to the range

Begin with the gun on target. Fire one round. Make an RWR and immediately fire another round. Practice until you’ve achieved a shot-to-shot time of under five seconds. In the real world, use an RWR when you’re in a safe spot and there is a defined stop in the hostilities.