3 Simple Kits for Reloading Rifle, Pistol, Shotgun, and Rimfire Ammo in a Pinch

These kits won’t completely solve your ammo shortage woes, but they will help you build some rounds in a pinch 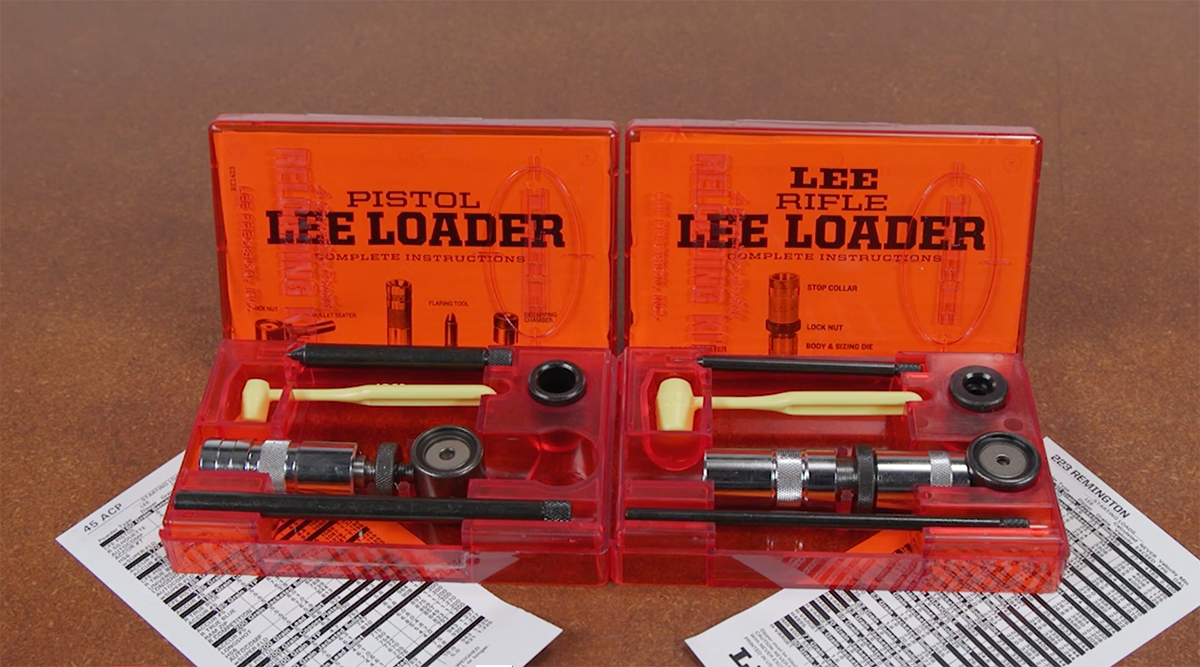 Simple reloading kits like the Lee Loader can help you turn out new rounds in a pinch. Lee Loader
SHARE

If there was ever a time to get serious about preparing for an ammunition shortage, it would have been about a year ago. Sure, we’ve seen shortages of niche ammunition and reloading components before, but the current lack of general hunting caliber ammunition is unique. The pandemonium seems to be fueling itself. It’s not uncommon for people to snatch up any ammo they might possibly use someday—just because it’s on the shelf. It’s frustrating for you, me, and everyone else interested in hunting and the shooting sports. The situation has got many of us thinking about the possibility that someday, there might just not be any more ammo available. There may come a time when I have to improvise to put some meat on the table. I’m optimistic that eventually, the panic buying will subside and things will go back to normal. But this situation has definitely highlighted the importance of being able to load your own ammo.

Handloading ammunition isn’t a singular solution to ammo shortages—component shortages are a problem too—but being able to hand-load ammo, even in limited quantities, simply gives you more options. The impacts of the current ammo shortage will likely last into this fall’s hunting season, or beyond. If you don’t already have ammo for your hunting rifle, it could be hard to come by. For this reason alone, it never hurts to have a backup plan. Handloading can be expensive and complex to get into, but below I’ve outlined three simple reloading kits that allow you to reload pistol, rifle, shotgun, and even rimfire ammo without any special tools or expensive equipment.

I got my start in handloading with the Lee Loader, and so did my dad. It’s been around for more than 60 years. These kits come in packaging that’s a little smaller than your standard reloading die box and include all the basic tools you need to decap, re-size, prime, measure and fill powder, and seat bullets, with only the aid of a non-marring mallet. The “loader” is a die that somewhat resembles the reloading dies that presses use, but you only need a solid, flat working surface. Except for some pistol cartridges, these loaders only re-size the cartridge neck, so it helps (and sometimes is necessary) to only use brass fired from the gun you are loading for to ensure smooth chambering. First, you’ll set the case in the base and use the decapping rod to tap out the old primer. Next, you’ll hammer the case into the sizing die until flush. You’ll place a primer in the priming chamber, set the die with case on top of it, and use the priming rod with the hammer to seat the new primer and push the case free of the die. Next comes the powder charge. Each kit comes with a generic powder measure and lists of powders and associated measurements with that cartridge. It does help to use a real powder scale for accuracy, but as long as you stay within the guidelines, your ammunition will be totally safe. After charging the case with powder, you set the case in the depriming chamber (so that no contact can be made with primer), and slide the die over the case (which is also used to adjust seating depth). Drop the bullet in, and use the seater to tap it into place. For what is a pretty rudimentary process, this kit is very capable of producing accurate and dependable ammunition, and is completely safe. These kits are mostly sold out on the Lee website, but you can still find them by hunting around online.

Lee also makes a shotshell kit. Reloading for shotguns is a bit of a different animal altogether than for rifles and handguns, and requires it’s own specialized equipment. The Lee Loader for shotguns is similar in concept to their kits for rifle and handgun ammo, a compact, simple kit that allows you to fully reload your own shotshells without any presses or special tools. It comes with all you need to decap the old shells, reprime your hulls, measure powder, seat wads, measure shot, start your crimp, and finally, crimp your shells closed. Like the other kits, it includes lists of powders and safe ratios of powder, shot, etc. They no longer make these kits, but you can often find them for 12 and 20 gauge on sites like eBay. Don’t expect to be cranking out hundreds of Olympic grade trap loads, it’s a fairly time-consuming process, and some hulls will give you more uniform results than others, but in a pinch, this is a pretty sweet little kit.

Rimfire ammo usually seems to be the first to become scarce in an ammo shortage. It’s generally considered to be non-reloadable. It’s also one of the most common and most fired types of ammunition. I had no idea that .22 LR and .22 WMR could be reloaded until my buddy somehow scrounged this little kit from deep down some internet wormhole. After he loaded a couple batches of ammo, I was sold. Almost exclusively, rimfire ammunition is considered one-and-done, because the primer is a compound packed into the rim, not a self-contained unit, seated into a piece of brass. However, rimfire ammo is reloadable. You do so by scraping the remains of the priming compound and burnt powder out of the rim, and replacing it with a wet, fresh priming compound. A new powder charge is added, and a projectile is crimped into the case. The cool part of this kit is that it includes the tools to clean the cases, and recipes for your own priming compound and powder (or you can order their components to make the compound). What most would consider the “kit” itself is a machined mold that allows you to cast your own bullets (2 different weights), as well as apply that critical crimp to finish your loads. Getting reliable reloads takes a little practice, but this is surely a nice option to have in the back pocket, should you be needing to put some rabbits or grouse in the pot and rimfire ammo is nowhere to be seen.

Of course, any time we’re talking about any sort of reloading or handling of components that are flammable or can be explosive (like primers or priming compound), we always need to exercise extreme caution, but when care is taken, reloading is totally safe, and it’s a skill that every shooter should have.