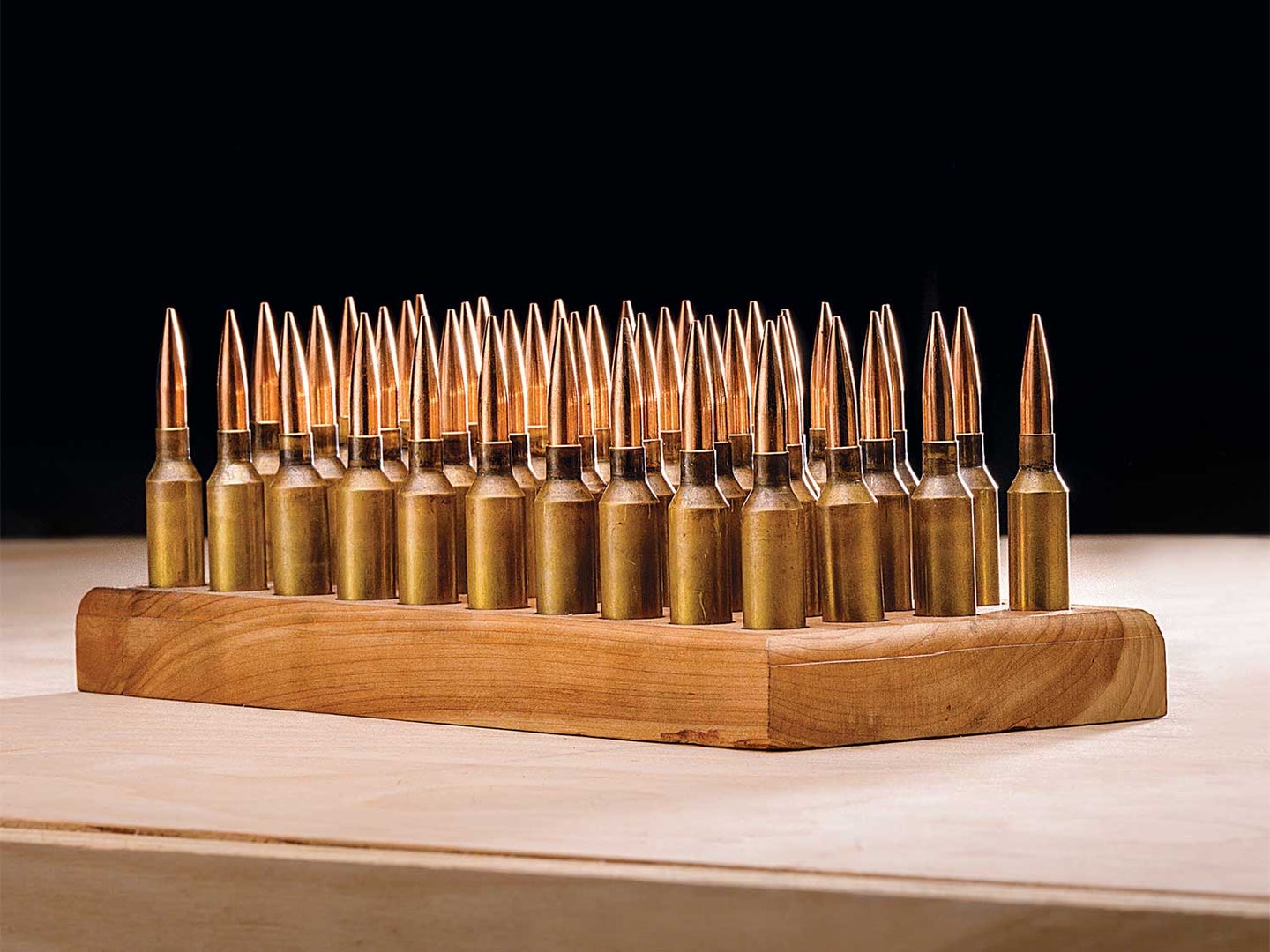 A fresh tray of 40 rounds of 6 Creedmoor. Bill Buckley
SHARE

Perhaps you’ve seen one of those How to Reload pamphlets with a cover that shows Dad, Mom, Gramps, and the kids standing around a spotless bench, grinning from ear to ear with an enthusiasm usually associated with winning the Mega Millions jackpot. I can tell you one thing for sure—they weren’t reloading for a precision rifle competition. When you sign up for a tactical field match, you can count on a lot of trigger pulling. For most two-day matches, it’s suggested you have 200 rounds, and that doesn’t include what you burn up in practice before the first stage.

The high round counts, the challenging targets, and the real-world shooting positions are what make these competitions fun.

But once the sport gets its hooks into you—whether you shoot the Precision Rifle Series, the National Rifle League, or any of the dozens of independent matches around the country—chances are you’re going to want to reload.

And that’s where the fun ends. Trying to make quality ammo in bulk is a grinding chore. In order to preserve some semblance of a family life and to maintain my sanity, I’ve worked out a system for making precision ammunition in a fraction of the time it used to take me.

Full disclosure: The bits and pieces here are based on input from Wade Stuteville, Jimmie Todd, Chris Gittings, John Whidden, and Gary Kieft, who are all top-tier shooters and reloaders.

My goal was to handle the brass and components as little as possible while ending up with ammunition capable of winning. While anyone can re-create my system in its entirety, you can also take an à la carte approach, incorporating some elements while bypassing others. There’s something here for anyone who wants to reload their own rifle ammo and likes to shoot a lot.

Before getting into the weeds on how this works, what exactly are we hoping to accomplish? It boils down to two things: five-shot accuracy of .3 MOA (though anything .5 MOA or better is adequate), and consistent muzzle velocities that yield a standard deviation (SD) over 10 shots in the single digits, ideally 7 or less. Ammo that does this can win pretty much any tactical steel match out there. You can chase better performance, of course, but you’ll hit a point of diminishing returns with the effort it takes to get there. You’re better off spending that time at the range working on your skills.

Unlike reloading in benchrest, where every variable is controlled and each piece of brass is coddled like a newborn, this system allows you to cut corners, saving time. Here’s what I no longer do when preparing new brass: turn necks, uniform primer pockets, and deburr flash holes. Each match, you can count on losing about a quarter of your spent cases, so these processes just aren’t worth it given the volume of brass you’ll deal with over the course of a season.

Weight-sorting brass is worthwhile for accuracy. Wade Stuteville, who buys his brass in lots of 1,000, will weigh them all, and any that are unusually heavy or light (plus or minus 1.5 grains) get a notch on the rim with a needle file. Those are reserved for practice or shots in a match that don’t require a high degree of precision.

I also like to take a handful of new pieces and check neck-wall thickness and concentricity. If there’s more than .002-inch variability in thickness or runout (concentricity), those go into the practice pile. Most brass should mic out at .0015 inch or less. This is where purchasing cases from makers such as Lapua, Alpha Munitions, and Peterson Cartridge, all of whose products are damn near perfect, can provide peace of mind.

Before loading new brass for the first time, I run it through a Giraud Power Case Trimmer. This beast is designed for high-volume work. It trims brass to length and puts a chamfer on the inside and outside of the case mouth in one operation. I set it to .010 inch under standard trim length—that way I’ll only ever need to trim the brass once in its life cycle. Using the Giraud, I can trim and chamfer 100 cases in less than eight minutes. It’s a speed demon.

It’s next to impossible to keep brass segregated by the number of firings in precision rifle competitions. So, one step nearly every top shooter includes in their reloading regimen is annealing. Doing so “resets” the brass to the same baseline each time you reload, helping ensure consistent neck tension, which is one accuracy-­enhancing quality you don’t want to sacrifice.

The Annealing Made Perfect AMP is an induction system that anneals brass quickly. But the company has recently introduced the AMP Mate, an automated case feeder that sits on top of the AMP. Its blinking LEDs and moving parts give it the look of a demented R2-D2, but it makes even shorter work of the task. If you’re wondering how often you should anneal, the answer is after every firing.

Now we’re ready to make some ammo. But take note of this critical detail: Before the brass goes into the case feeder on the Dillon XL650 progressive press, it needs to be lubed—but not any lube will do. I use Hornady One Shot because it is not a petroleum-based lubricant. This allows me to resize and reload the brass in one process with my dies on a single tool head.

With petroleum-based lubricants you need to clean the lube from the inside of the case neck before adding the powder and seating a bullet because if that ammo sits on the shelf for any length of time, the lube will set, potentially changing the amount of tension on the bullet and leading to erratic muzzle velocities.

If you don’t use One Shot, you need to handle the brass twice: once when you lube, resize, and decap, and then again after you clean it when you go to prime, add powder, and seat bullets.

The tool head on the Dillon XL650 has five separate spots for screwing in dies. As the handle is worked up and down, the shell plate automatically advances by rotating to the next spot.

Station one contains the sizing die. This die has a neck bushing and expander ball that control the amount of neck tension on the bullet. For 6mm Creedmoor, I use a .268-inch bushing (which squeezes the outside of the neck to a smaller diameter) and a .240-inch expander ball (which expands the neck a bit as the brass is withdrawn from the die). After resizing, the inside of the neck on my brass measures .240 inch, which is .003 inch under diameter for a .243-caliber bullet.

Some reloaders like to size their brass to just .001 inch under bullet diameter, but cutting it that close can lead to problems with bullets slipping, and .003 inch leaves a bit more margin for error. The die is also set to bump the shoulder back .001 inch and knock the spent primer free.

At station two, a new primer is seated into the case.

Station three holds a powder funnel. When the handle of the press is in the down position, the shell plate rises and our now-primed brass seats against the stem of the funnel. At this point, the powder is manually dumped into the case.

The final process is seating the bullet. I use a Redding Competition bullet seater, which has a micrometer on top in order to easily make alterations to my bullet seating depth.

As a rule of thumb, seat your bullets at least .020 inch off the rifling.

To improve the tolerances on these reloads, there are a couple of after-market upgrades to consider. The first are the CNC-machined floating tool heads from Whidden Gunworks. The precision-ground surfaces align the dies better in relation to the shell plate, and the dies at stations one and four—the resizing die and bullet seater—sit in locking rings with a little bit of wiggle (i.e., float), which lets them self-align with the brass for better concentricity.

I also replaced the bearings in the shell plate with a kit from UniqueTek, which reduces the amount of wobble in the plate.

The techiest element in this system is the automatic powder thrower and scale. This unit, made by Jimmie Todd, is called the Delta APM. It can dispense powder charges that are accurate to plus or minus a single kernel of powder. Trying to generate powder charges with that degree of precision manually—­particularly in any volume—is a horrible and time-consuming chore, but for years shooters suffered through the task for the sake of accuracy.

There is an entire garage industry of mad geniuses making products similar to this, but I like Todd’s system because the charges are so consistent. It starts by automatically dumping an underweight charge onto the scale, at which point a powder trickler adds kernels one at a time until the proper weight is reached.

Because the scale is so sensitive—even the breeze from a wave of your hand will register on it—the unit needs to be isolated from the press so that the action of moving the 650’s ram up and down doesn’t give the scale fits. My Delta APM is mounted on a shelf that’s just a few inches above the top of my bench. The bench doesn’t touch the wall the shelf is attached to, so none of the vibration from working the press is transmitted to the scale.

Even so, this is still the slowest part of the reloading process and creates a bottleneck in production. The unit takes, on average, 18 seconds to cycle and throw each charge. Using it, I can load a single round every 24 seconds, meaning I can produce 200 precision rounds in about 80 minutes, give or take.

To speed this up, many reloaders add a second powder thrower to their bench—and there’s a space on my shelf for another one as soon as I save up the money to purchase it, which will cut my reloading time even more.

The good news is you don’t need to go all in at once. Any single item here will up your reloading game and allow you to save the one commodity that’s in short supply for all of us: time.