Gayne Wants You to Name His Snake – And Win a Texas Hunt Company Belt!

He’s–I’m assuming he’s a he–brownish-gold in color, maybe 6 feet long, almost as big around as a beer bottle, and... 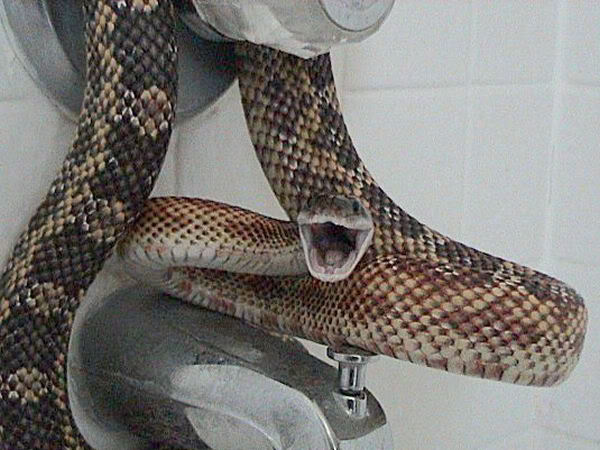 He’s–I’m assuming he’s a he–brownish-gold in color, maybe 6 feet long, almost as big around as a beer bottle, and good at scaring the crap out of me. He’s got a mean disposition and seems to take offense when I stare at him for too long. Scientifically, he’s known as Elaphe obsoleta lindheimeri, the Texas rat snake, and for the past four years he’s made my deck his home.

At first he kept to the area under the deck, near the jasmine-covered lattice. About two years ago he moved to the rafters at the upper corner of the house and deck roof. I prefer this area, as each of us can mind his own business. One night about a year ago he left the corner rafters for some reason, and I ended up stepping on him in my bare feet. He cut the air with a monstrous hiss as I unleashed a glass-shattering scream and jumped so high I almost hit my head on the ceiling. I was back inside before my feet hit the floor. I seriously considered putting a .22 in him that night but thought better of it. I’m guessing he’s eating something that lives around my deck that I’d rather not know about–I actually saw a tennis-ball-sized bulge twisted in his coils one night, but for all I know he just had a really bad gas bubble. A rat, mouse or bird is probably more like it. There’s a kid down the street with a really loud bass-thumping car I wish he’d eat.

So, since my interaction with him is limited and he actually seems to be serving a purpose, I guess I’ll let him continue to hang around. I suppose he needs a name, though. Y’all have any ideas?

Enter your snake name idea in the comments below. The winner will receive a T.H.E.® Airport Friendly Belt from Texas Hunt Company. Check it out at www.texashuntco.com

I’ll pick the winner in a few days.