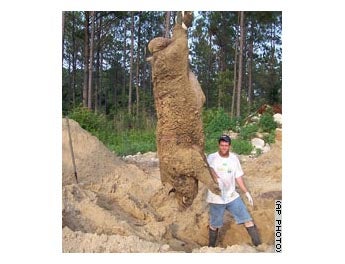 After months of speculation, rumor mongering and hearsay, a documentary film from the National Geographic Society put to rest the truth about Hogzilla. The giant pig was killed last year on a farm in Georgia. Initial reports put the beast at a mythic size (12 feet long and 1,000 pounds), which led some to call it the “Sasquatch of the South.”

A questionable photo and local testimony was all that led credence to the story. Understandably, many had their doubts, because it just didn’t seem possible for a wild hog to be even bigger than an Angus cow.

Still, the researchers from National Geographic persisted in the name of science. What they unearthed were the remains of one big pig. It wasn’t quite 12 feet or 1,000 pounds, but the hog was a true behemoth, measuring over 7 feet. Look for an in-depth report soon in the pages of Outdoor Life.