Texas rancher's controversial plan will allow long-distance hunting with the click of a mouse. 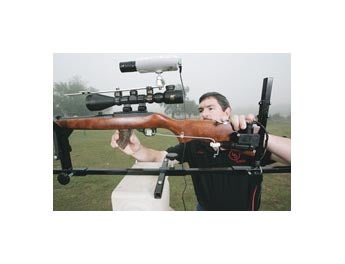 Deer camps, bolt-action rifles and camouflage may soon be exchanged for cubicles, high-speed Internet connections and casual attire-that is, if John Lockwood has his way.

Lockwood, owner and inventor of www.live-shot.com, has garnered significant attention with his new twist on hunting. The main ingredients of his plan are a Texas ranch stocked with a variety of game, a remote-controlled, computer-aided rifle and the Internet. Lockwood’s high-tech shooting platform allows people anywhere in the world to log on, enter a credit card number and start shooting. Lockwood is quick to point out that “it’s not just a loaded gun out there in the woods; there’s always an on-site ‘guide’ who overrides the controls until he is satisfied with the member’s sight picture.”

While some view this form of hunting as the future, many prefer a more traditional approach. No sooner had the idea begun making news than several organizations, including Safari Club International and Texas Parks and Wildlife, spoke out against it. The TPW seems to be gearing up to prohibit or restrict online hunting. The serious media quickly jumped on the story, as did_ The Daily Show_ on Comedy Central.

But Lockwood is determined. “My goal is to bring shooting and hunting to those who can’t do either. Just because you have the ability to go out and experience hunting firsthand doesn’t mean it’s right to discriminate against those who don’t.”