Why can’t I have luck like this? Pure luck, as in taking the first, only and last gharial listed in... 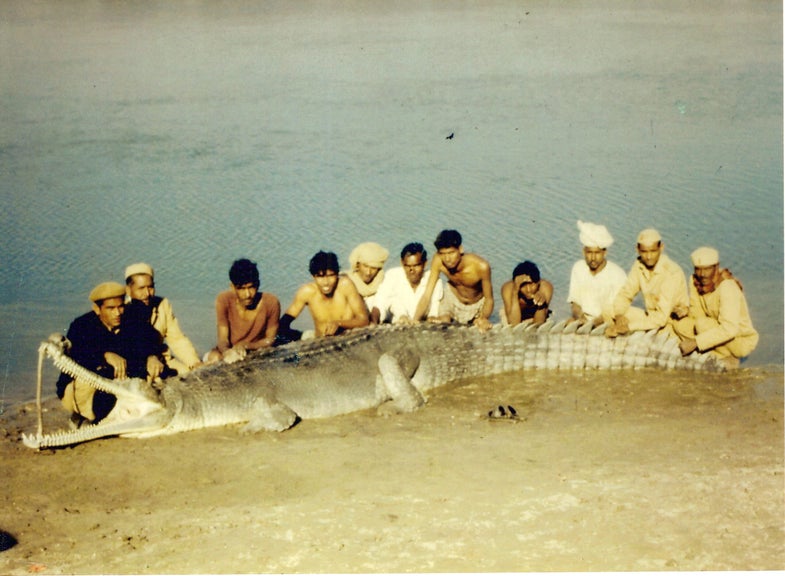 Why can’t I have luck like this? Pure luck, as in taking the first, only and last gharial listed in the Safari Club International Record Book?

While hunting tiger and sambar deer in India in November 1968, hunter Marc Pechenart and his wife, Martine, of Paris, France, and friends took a noonday break for lunch under some shade along a wide river. No sooner had they found a suitable spot than Marc spotted a gharial on the distant bank.

Despite being one of the larger species of crocodilian (specimens of over 23 feet have been recorded) and possessing a narrow snout filled with 102 needle-like teeth, gharial are extremely shy and secretive. They are perfectly adapted to life in fast-moving rivers, having powerful, fully webbed rear feet and a long slender tail. These adaptations make them extremely slow and lumbering on land. Their legs are so short that the animal has to resort to dragging itself across the land rather than walking. Because of this, gharials rarely leave the water, except to lay eggs and occasionally bask at the shore’s edge. A fact that made Marc’s spotting of one such a rarity.

Knowing that the chance to take such a trophy was a once-in-a-lifetime opportunity, Marc quickly grabbed his .300 Holland & Holland and got into shooting position. A quick 200-meter shot to the center of the animal’s head killed the dragon, while a second shot just below the first acted as insurance.

After members of Mamman Singh Shikar (guide service) retrieved the animal, an ecstatic Marc posed for photographs and helped take measurements. Weighing over 1,100 pounds and measuring 17 feet 1 inch, Marc’s gharial was a true monster. Unfortunately, because the taking of the gharial was unexpected, there was only enough salt to preserve the head and the belly skin of this one-of-a-kind trophy. Marc’s success continued in the days to come with the taking of both a record-book tiger and record-book sambar.