If you’re like me, you don’t eat a lot of tortoise. And when you do it’s probably on a frozen... 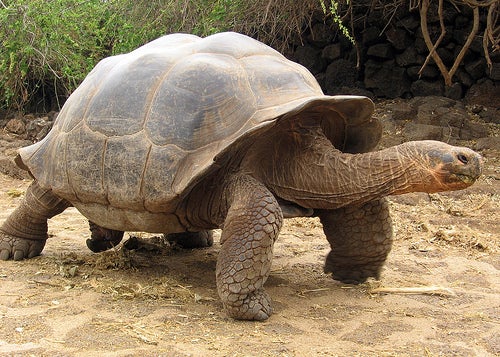 If you’re like me, you don’t eat a lot of tortoise. And when you do it’s probably on a frozen pizza. Regardless of how you like your tortoise meat – in a taco, in a dip, with humus, or au gratin – know that getting it used to be a lot harder than it is today.

From roughly 1600 until the late 1800s sailors, explorers, pirates, and whalers supplemented their meager diets by hunting the small islands of the Pacific for feral goats and pigs. But perhaps the most coveted, and most difficult, game to obtain was the giant tortoise.

Known as “turpining,” hunting for what is now commonly referred to as the Galapagos Tortoise, was a difficult and often deadly endeavor. Many hunters died after getting lost or injured traversing the rough terrain of the islands. Once located, the tortoise’s legs were tied together allowing hunters to carry it out “backpack” fashion.

Considering that the temperature of the islands often topped 100 degrees and the average tortoise taken weighed close to 100 pounds, this was as excruciating a venture as it was dangerous. Larger tortoises, some topping 600 pounds, were carried from the jungle tied to large poles. When properly cooked, tortoise meat was said to taste like butter.

Wonder if I could get away with turpining on the Galapagos Islands today. Probably not. Should I try? Could you master the art of turpining? Comment below!