Tips and Tactics: How to Hunt Black-Tail Deer

Black-tailed deer make phantoms seem positively obvious. These rainy forest wraiths are cousins of mule deer, but nothing except their... 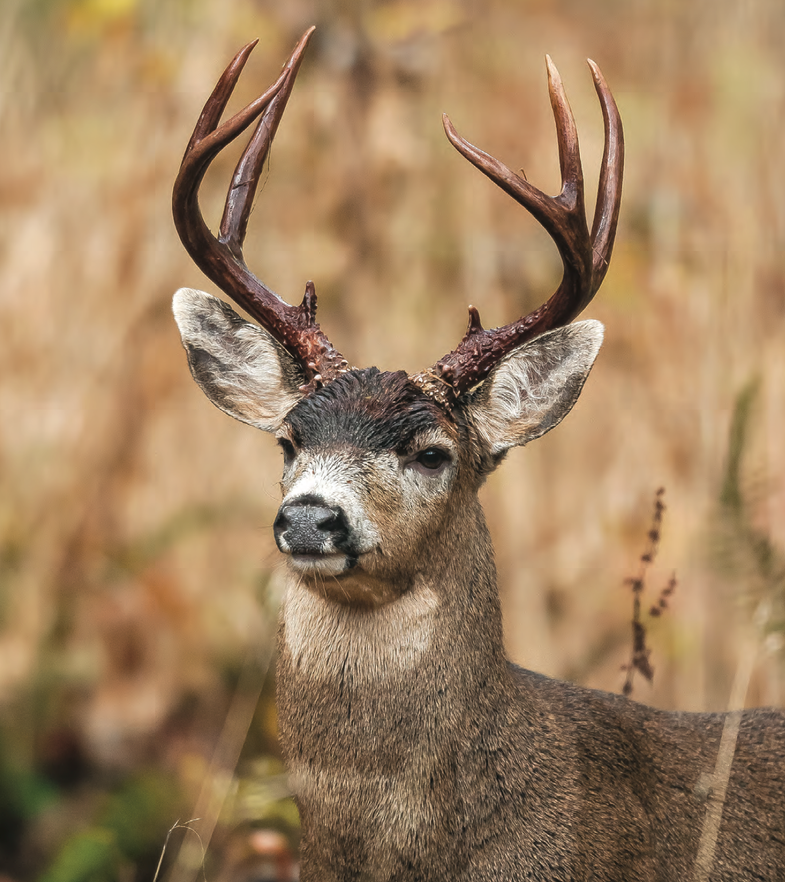 Black-tailed deer make phantoms seem positively obvious. These rainy forest wraiths are cousins of mule deer, but nothing except their forked antlers resemble their open-country kin. Blacktails crave tangles of grown-over hemlock and cedar and foggy ridges of old-growth fir. The Pacific Northwest’s Columbian blacktail roams the Coast and Cascade ranges from central California to British Columbia. The smaller Sitka deer clings to the coast from central British Columbia into Alaska, where it shares habitat with the ferocious brown bear.

      When I think of black-tailed deer, I think of banana slugs. Both the shell-less mollusk and the forest deer occupy the same soggy, slant-lighted domain of dripping alders, spongy moss, and stinging nettle and both seem allergic to sunlight and open skies.

Given their preference for tangled cover, blacktails are among the hardest of all deer to hunt, and a trophy blacktail or Sitka deer is one of the great prizes of North American deer hunters.

You will earn every blacktail buck you encounter, with merit measured by the heights of elevation you attain, thickets of brambles you negotiate, and hours of drizzle you endure. Those few hunters who take multiple trophy blacktails typically do it by hunting the edges of recent clear-cuts, where the deer emerge in feeble light to nibble on nutritious shoots and needles of grass.

Optics don’t really factor into blacktail hunts, and neither does traversing lots of ground. What matters is being in the right place at the right time, a sensibility that’s gained through years of living in blacktail country, noticing subtle patterns, and anticipating the movements and seasonal preferences of these deer.

This is a close-in game, more akin to grouse gunning than deer hunting. Many Northwestern blacktail hunters shoot open-sight pump guns, lever rifles, and short-barreled, quick-pointing bolt guns that won’t get hung up in the brush and can be deployed rapidly.

The other critical attribute of blacktail gear is its ability to function when soaking wet. You need a gun that’s capable of shooting even after soaking in streaming rain, and outerwear that can repel water while remaining relatively quiet in the brush. 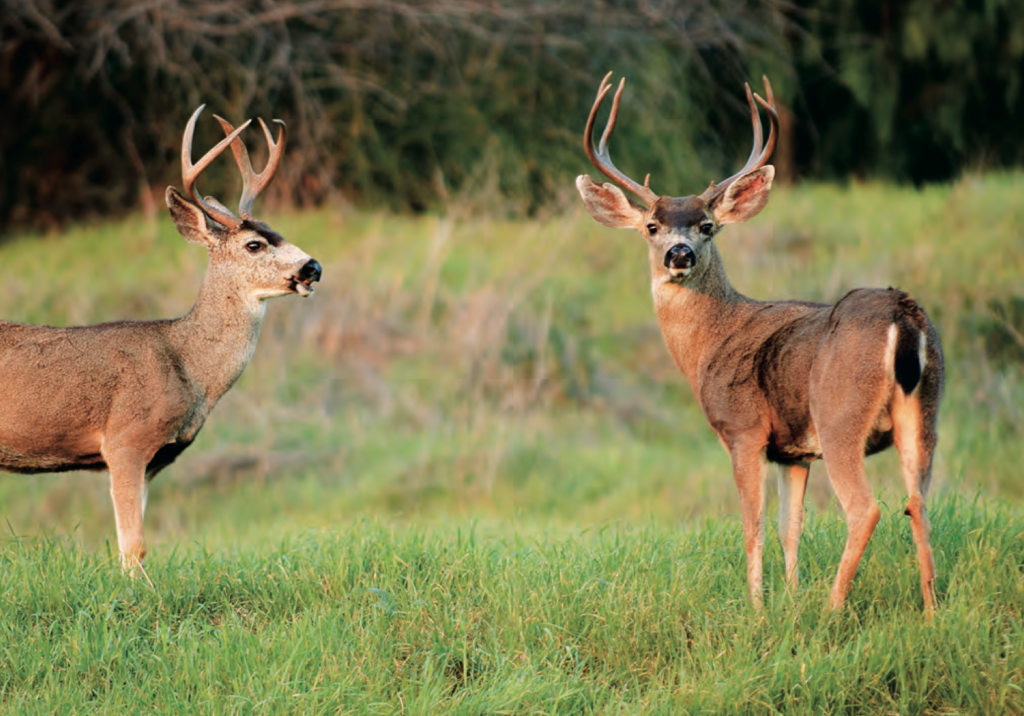 Evolutionary biologists report that black-tailed deer are the ancestors of both our mule and white-tailed deer, and where their ranges overlap, mule deer will interbreed with blacktails. For those who keep records of big game, that can be problematic, as deer that occupy the hybridization zone might exhibit qualities of either.

The Boone and Crockett Club settles the issue geographically. Generally, deer killed east of the Cascade Crest are defined as mule deer, and those killed west of the divide are considered blacktails. There are exceptions, and undoubtedly many trophy blacktails of central Oregon and California might be considered middling mule deer, just as outsize blacktails killed on the east slopes of the Cascades have been unfairly classified as mule deer.

Still, if you kill a heavy, deeply forked buck west of Interstate 5, you have grounded one of the great trophies of North America, a moss-country deer
that required skill, persistence—and good rain gear—to obtain. There are also some anatomical cues to consider:

Tail
A blacktail has a wider tail than a mule deer, and it will be more solidly black, with a white fringe at the bottom and a white underside.

Metatarsal Glands
A blacktail has smaller glands on the insides of its rear legs than a mule deer does, and those glands are located lower down on the leg.

Face
A black-tailed deer’s face is shorter and darker than a mule deer’s, and the ears of a blacktail are shorter.

Antlers
The antlers of a blacktail buck are shorter and more compact than those of a mule deer. 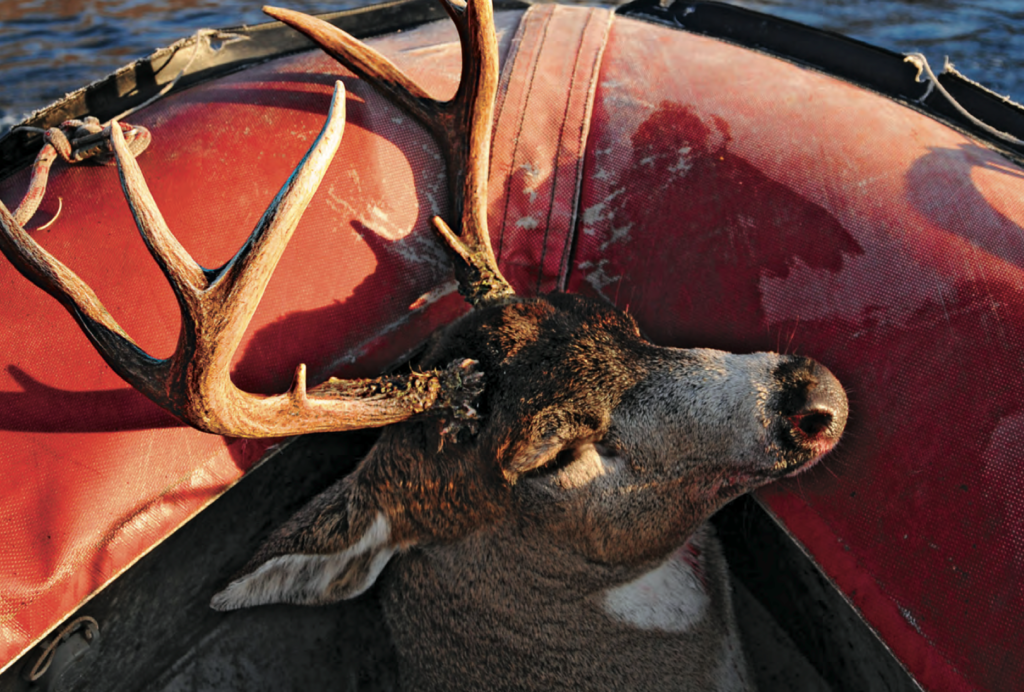 You know Kodiak Island for its monster bears, but your reason for hunting here should be its abundant black-tailed deer. The deer of this rain-lashed, brush-covered island are of the Sitka variety, smaller and somehow even more elusive than the Columbia blacktails of the mainland.

I hunted Kodiak from a boat, a small tender that offered little comfort beyond a berth and a kitchen. But that passes for luxury in these sleety, white- capped waters in October. I motored to shore each morning on inflatable Zodiac rafts and spent soggy days hunting the bear-infested brambles and high ridges of the island.

Hunters have two choices here. They can either stay on shore, to take their pick of does and immature bucks, or they can soldier through an empire of devil’s club and vine maple to the upper slopes, where older, roman-nosed bucks chase does during the height of the late-fall rut.

I chose the latter and shot a Sitka buck that just misses the Boone and Crockett Club records. I’ll always remember the view from where he fell, patches of sun glinting on the saltwater, the Alaska Range looming. And I’ll definitely never forget the return to the boat, dragging 150 pounds (68 kg) of fresh meat through the very gut of bear country.

Forest Management
Traditionally, blacktails thrived in the years following logging activity. Mosaic timbering—rather than clear-cutting—particularly benefitted deer because they fed heavily on brush that grew up in clearings. But some biologists say recent logging practices are detrimental to blacktails, especially the use of herbicides to kill the brush and brambles that can choke out the newly planted trees. Without that brush, deer lose both food and secure cover.