A 29-year-old man who ignored a closed and posted state forest road and caused substantial damage while breaching a locked... 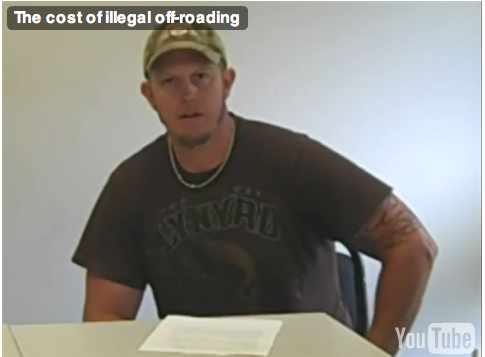 A 29-year-old man who ignored a closed and posted state forest road and caused substantial damage while breaching a locked gate with his Chevy Blazer 4×4 was sentenced by a Washington state judge to make a public apology and confession on YouTube.

After a six-member District Court jury found Camas, WA resident Rickey Sharratt guilty of misdemeanor destruction of state-owned property earlier this year, a Washington Department of Natural Resources officer came up with the novel idea of filming a video featuring the public lands scofflaw confessing his crime for the viewing public to enjoy. Sentencing Judge James Swanger liked the concept, giving Sharratt a choice between the video or mandatory time on a public service work crew.

Dressed in a Lynyrd Skynyrd t-shirt and obviously reading from a prepared script, the 4-wheeling ne’r-do-well offered a less-than-convincing acting performance.

“I learned how off-roading damages habitat that fish and wildlife depend on,” Sharratt says on air. “The cost of illegal off-roading is pretty horrible.”

Despite his lackluster appearance in the video, it appeared obvious that the forced public admission served to adequately deflate Sharratt’s previously arrogant attitude toward gated and posted property on public lands.

We bet he won’t try off-roading in restricted areas again any time soon.

According to court documents, damage inflicted by Sharratt to the forest road was estimated at $2,140. In addition to doing the YouTube video, he was ordered to pay $1,200.