With a tricky 325-yard shot, Sara Rose Brandenburg dropped a massive 41-inch Stone sheep and completed one of the most... 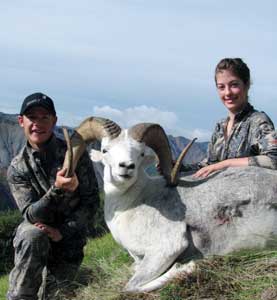 Sara Rose Brandenburg may be be the best 16-year-old hunter in the world. Last month she completed a North American Grand Slam (which requires a hunter to kill all four species of North American sheep through fair chase hunting), making her the youngest female hunter to ever accomplish the feat.
SHARE

With a tricky 325-yard shot, Sara Rose Brandenburg dropped a massive 41-inch Stone sheep and completed one of the most difficult hunting feats in the world: The North American Grand Slam. What’s even more impressive, is that Brandenburg is just 16 years old, making her by far the youngest woman to ever complete a Grand Slam (which requires a hunter to kill all four species of North American sheep through fair chase practices).

Sara has hunted big game all over the world, but she started chasing sheep only one year ago. In short order Sara killed a Dall sheep in Alaska, a desert bighorn in Mexico and a Rocky Mountain bighorn in British Colombia.

But just because she completed her Grand Slam so quickly doesn’t mean that it was easy. Sara killed her final ram earlier this month on the fifth day of a treacherous hunt with her father Rod in the Yukon Territories.

By the end of the hunt, Sarah’s body weight had dropped from 105 pounds to 93 pounds. She packed out all four of her rams and always packed in all of her own gear. Her physical and mental toughness has won the admiration of many of her bigger, stronger, hunting partners and guides.

“This kid completed all these hunts the real way! She hunted just like most men. No extra help or attention was asked for. She didn’t book hunts for high dollars or hire extra spotters, pre-scouters, or any fly time. Sara went on regular market-value hunts and completed her Slam with pure heart, guts and determination,” wrote her guide Dustin Roe on wildsheep.org.