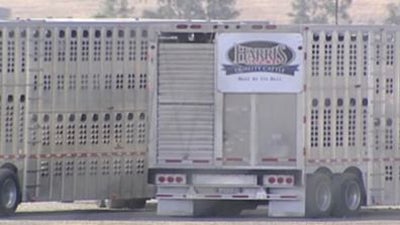 The North American Animal Liberation Press Office reports that they received an email Monday from an anonymous source that claimed responsibility for the criminal act. The email read in part, “Containers of accelerant were placed beneath a row of 14 trucks with four digital timers used to light four of the containers and kerosene soaked rope carrying the fire to the other 10.
We were extremely pleased to see all 14 trucks were a total loss.” The email continued, “We’re not delusional enough to believe that this action will shut down the Harris feeding company, let alone have any effect on factory farming as a whole, but we maintain that this type of action still has worth, if not solely for the participant’s peace of mind, then to show that despite guards, a constant worker presence and razor wire fence, the enemy is still vulnerable.” The e-mail ended with the ominous threat, “Until next time.”

Fresno County sheriff’s Deputy Chris Curtice told the San Francisco Chronicle that there had been animal-rights protests at the ranch in the past, but “I don’t think we’ve ever had anything like this.”

I guess, at least for these whack jobs, nothing screams “show compassion to animals” like blatant criminal acts of violence that end in utter destruction and the loss of human wellbeing and income. Very delusional thinking if you ask me.