Winter temperatures can take their toll on you and your pup. Even good dogs will lose body heat and their... 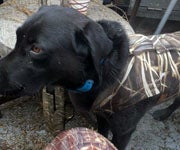 Winter temperatures can take their toll on you and your pup. Even good dogs will lose body heat and their drive when temperatures drop to the teens or below, and water temps barely hover above freezing. And when your pooch willingly jumps into icy water to make retrieve after retrieve for you, the least you can do is take a few precautions to help your pooch fight the chill. The most important is outfitting him with a neoprene dog vest.

I left home and forgot to bring Kona’s heavy-duty vest on our recent hunt in the Potholes Reservoir in Central Washington state. Luckily, one of the guys I was hunting with had his bag lost by the airlines (well, lucky for Kona, not for him) so we made a late-night Wal-Mart run. While he was picking out wool socks for the next day’s hunt, I found a thin, cheap $20 neoprene vest for Kona to wear.

I was dubious of how well it would work. It wasn’t nearly as thick as other vests he has worn and it only had a Velcro closure; no zipper or other heavy-duty latching system.

As you can see from the picture, it was cold out during the hunts, but Kona stayed comfortable. And he was nearly dry and very warm under the vest.

Cabela’s makes a good vest, as does Avery. I’m told Rivers West has a very good one — if it’s anything like their coats, it should work very nicely for a dog with the added benefit of not chaffing.

Other things to keep in mind when working in icy temps:
• Check your dog’s ear tips and warm them with your hands on occasion; extremities are the first to suffer from frostbite.
• Remove any ice buildup; it might make for dramatic photos up ice can lead to frostbite and can cut your pup if located near joints.
• Bring a towel for Fido to sit on, especially if he’s to lie on metal; the cold and wet combined with lying on a metal surface for hours will make it harder for your dog to maintain body temperature.
• Watch the tail. Kona is susceptible to “cold-water tail” – a painful swelling of the tail that turns half of it unresponsive. Keep it as dry as possible and out of the water. If you’re hunting a treestand in flooded timber, make sure the dog doesn’t let his tail dangle into the water.
• Stoke the fire: Feed a performance diet to maximize calories and keep your dog’s internal engine primed and burning.