Video: Death to the Angry Birds

To build up a stronger online community, we’ve been trying here at Outdoor Life to boost our presence on Facebook.... 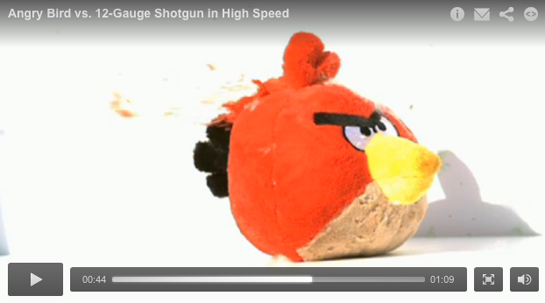 To build up a stronger online community, we’ve been trying here at Outdoor Life to boost our presence on Facebook. With that in mind, we bring you our first Facebook exclusive video. Click the photo, become a fan and watch this Angry Bird get smoked by a 12 gauge.

Take two cutting-edge high-speed cameras, a dozen rifles, shotguns and muzzleloaders, a truck bed of ammo, a Wal-Mart shopping spree, a 200-yard shooting range, and what do you get? The first Outdoor Life/Field & Stream high-speed video shoot.

We were the pigs. The pigs had guns. The pigs won. Sort of… As you’ll see in the video (just click the image above) the plush red Angry Bird actually held up pretty well against our volley of Black Cloud No. 2 and a home-defense slug.

This trip to the range, however, wasn’t all about shooting things we thought would look cool. No, there was some editorial intent. So for the next few weeks we’re going to show you, among other things, exactly how a compound bow works and how a muzzleloader fires in super slow motion.

We couldn’t have done any of this without the help of Vision Research. They provided two Phantom high-speed cameras, the v1610 and v711, for our three-day shoot. The $100,000 v1610 captured bullet impacts at 43,400 frames per second. (Digital video and television, for comparison, usually runs around 30 frames per second.) We captured targets exploding, muzzle flash and other fun stuff in color at 19,300 frames per second with the v711.

Now, you may be wonder why sworn enemies OL and F&S are teaming up. Well, the opportunity to use such high-end cameras was so sweet niether brand could pass it up.

Special thanks to Winchester, Federal and Winchester Ammo.