Pig Hunting Tips: How to Call in Wild Hogs 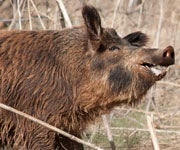 From 600 yards away, I could see the spotted feral pigs moving purposefully and predictably toward a creek bottom choked with thick kochia. For most animals, this 5-acre flat of clothes-grabbing brier is a dead zone too thick to negotiate, and the invasive rangeland weed provides scant nutritive value. For the countless feral pigs on this northwest Texas ranch, the kochia flat is home, sweet home.

Inside the weed patch is a labyrinth of tunnels and nests that the pigs use for bedding and brooding young. Once they’re in, there’s not much chance of getting them out–unless you think like they do.

Wild pigs are notoriously territorial and aggressive when threatened. Their tendency for fight over flight when directly threatened is legendary. You can use that trait against them and put more hogs on the ground by calling to them rather than chasing them.

Predator Tactics
A neglected truth in hog country is that you can call feral swine just as you might call coyotes or bobcats. And in most cases, pigs respond more predictably.

The best tactic for calling pigs is to scout an area from a distance and confirm that they are close. Rank cover is of no consequence, as they can be lured out. As a rule, if pigs are on the move, it’s hard to call them off their purpose. However, if they are actively feeding or bedded, they are suckers looking for a fight–and extremely vulnerable to calling.
From a downwind position, call to them in short, 30-second bursts, wait a minute, then call again. Typically, pigs will respond instantly and come running out of thick cover. If they’re within earshot, pigs will pour out of cover and come within scant yards of your stand.

Distressed Piglet Squeals
Commercially produced mouth-blown calls have some limitations. Most are little more than repackaged whitetail buck grunt calls. While grunting may work at calming hogs when they are feeding, they aren’t too productive for calling feral pigs to a stand. Instead, wild swine respond best to distress calls made by other pigs.

By far the best sound is of baby pigs in distress. The incessant squealing works both sows and boars into a frenzy. Timing, however, is key. When females have young in tow, they are especially vulnerable to the sound. Across most of pigland, that means late winter into the middle of spring.

An electronic caller loaded with piglet distress sounds will do everything you can do with a mouth call, plus it will keep running while you’re working your gun to control the hog population.