The British love their carp. What we in the U.S. consider ugly mudsuckers, the British revere. Carp are the fish... 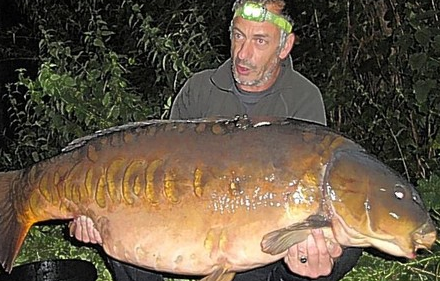 The British love their carp.

What we in the U.S. consider ugly mudsuckers, the British revere.

Carp are the fish of British anglers’ dreams. And most of the big dreams come with a name.

Such was the case with Brian Humphries who landed what is being hailed as one of the largest carp ever caught in the United Kingdom. The 48-year-old angler landed a 59-pound 14-ounce English Carp known in Berkshire (Brian won’t reveal where exactly) as “The Parrot” on August 12.

Brian told This is Gloucestershire, “In angling fraternities, The Parrot is recognised as one of the biggest, if not the biggest, English Carp in the UK.

I have been trying to catch this particular fish for about four years, so it is very ironic that, after I caught it three weeks ago, I then caught it again on Monday night.”

No wonder he won’t tell anybody where he caught The Parrot: He apparently likes being caught.

Or Brian’s an incredible angler. Which do you think is the case? Comment below!