9 of the Best Sub-Gauge Shotguns for Squirrel Hunting 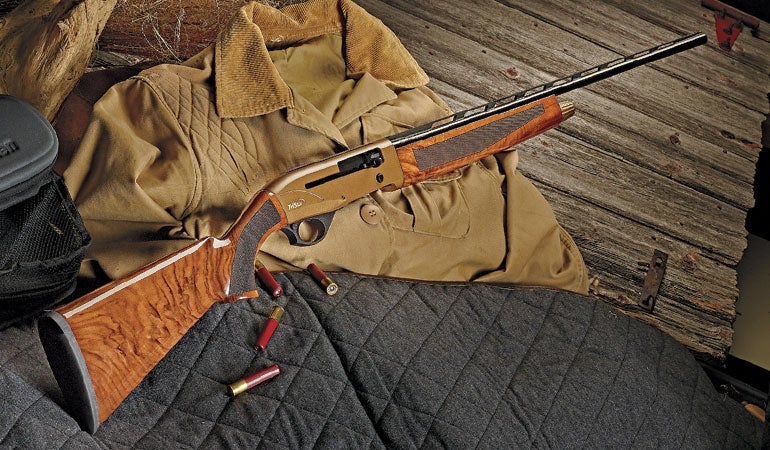 The G2 was one of the first .410 semi-autos to be put into production. TriStar
SHARE

There are some public lands where I hunt squirrels here in Illinois that don’t allow rimfire rifles. So I’ve really gotten into using different models of sub-gauge shotguns, and become a little obsessed with collecting more small-bore shotguns for pursuing foxtails and grays. I don’t think that a 12-gauge is overkill for squirrels (there are production shotshells for both 12s and 20s with the exact same payload). Sub-gauges are lighter (in most cases), making them easier to carry. I also hunt behind a West Siberian Laika that trees the squirrels for me, which makes the shots relatively short and simple. That means I don’t need the 40-plus-yard capability of a 12-gauge.

Collecting guns is often an expensive habit, but most of these smoothbores can be found for a modest price. Here are some of the sub-gauge squirrel guns I’d like to add to the gun closet.

I already own this single-shot in .410. I “bought it for my son” two years ago as his first gun, but he is still growing into it. So, for the next few years, it’s mine to break in. The Pardner is not exceptionally light for a .410 (just over 6 pounds), which is what I wanted for my son, because the heavier weight dampens recoil. It’s a simple break-action hammer gun, which is also important when you’re teaching a new shooter (one shotshell means there’s less of an opportunity to make a mistake). My model has a fixed full choke and can easily kill a squirrel at 30 yards. Pardner allows you to select what choke you want to pair with the gun. Available in 12-, 20-, and 28-gauge, plus .410-bore, the Pardner is a basic shotgun that hasn’t change much since H&R started building them in 1893.

I’ve loved and hated this gun over the years. The first round of skeet I ever shot the .410 autoloader on, I could not miss. Then, as is typical of my shooting prowess, I returned to earth and barely busted a clay in round 2. But squirrel hunting often lends to shooting a stationary target, especially with a dog (squirrels tend to remain still high up in the tree, at least for a few moments, though some will branch hop immediately). And it’s nice to have three shots instead of one in case of a miss or if there’s a second squirrel that flushes once you have shot the first. The gas-operated V2 has always cycled 3-inch loads reliably for me, and when I’m on, I have shot it extremely well. You can buy the synthetic version for around $600. Not a bargain price, but TriStars are workhorse guns, and last, so it’s a good investment. The only issue I have had with mine is the stock has come loose from the receiver a few times, but that just takes a few turns from the screwdriver and I’m back in the game.

The best part about the advent of production TSS shotshells is more gun companies are making .410s. Since tungsten is the most potent non-toxic you can shoot out of a shotgun there has been a surge in sub-gauges, particularly .410 turkey shotguns. You don’t need TSS to kill squirrels of course, but it has brought more .410s into the fold. The Mossberg SA line has been a reliable one for years, and when the .410 Field model debuted in 2019 I added it to the list. I’ve shot the 28-gauge version of this gun on skeet and doves. It’s an awesome-shooting gas gun at a respectable price point ($655). The .410 has a 4 plus 1 shotshell capacity, is chambered for 3-inch loads, and the 26-inch barrel cuts down on the overall length (and weight) of the gun, which makes a difference when you’re swinging on squirrels in thick cover.

A short-barreled double-gun is ideal for squirrel hunters, which is why I want this Stoeger coach gun in 20-gauge. Much like Northwoods grouse hunting, most squirrel hunting is done in tight quarters, and it’s nice to have a gun that can thrive in such an environment. This coach gun only has 20-inch barrels and is only 36.5 inches long overall, so there’s less of chance your barrels swing into a tree if a foxtail is skittering across the forest floor. The Stoeger is offered in single- or double-trigger models in a variety of finish options. All the stocks and fore-ends are made of AA-grade walnut, but the barrels and receivers come in blued, polished nickel and stainless steel (receiver only) finishes.

Winchester started making the single-shot Model 37 in 1936. By the end of production in 1963, more than 1 million had sold (none of which had serial numbers on them). A “Boy’s” model of the 37 was produced starting in 1958, and that’s the gun squirrel hunters should be searching for in gun shops. That particular model was offered in 20-gauge with a 26-inch barrel and shortened stock. The hammer on the 37 is also sleeker than most single-shots and located just behind the opening lever.

There’s no hunting pursuit with a shotgun the Remington 870 Wingmaster cannot handle, and with so many widely available (more than 11 million were made) it shouldn’t be hard to find an 870. But I actually want this pump gun in 28-gauge. It’s a more difficult task to locate one, but I shoot 28 gauges better than 20 gauges. It’s also a cheaper way to get my hands on that particular gauge of gun. Most modern 28s that are reliable can be pricey. It may be a little more difficult to find ammo for the 28-gauge, but squirrel shoots aren’t exactly high volume, so one box should get you through a few hunts.

This gun costs over $1,000, so it’s an expensive way to shoot squirrels, but it’s also a really cool way to shoot squirrels. The side-gate .410 lever gun from Henry holds six 2½-inch shells, so you will have to engineer your own plug or they are sold separately by Henry. And if you’re worried about finding loads for this gun, don’t be. Several manufactures make 2½-inch .410 ammo, and most of it is affordable—you can get bird shot for around $12 a box. I would go with the H018G-410, which has a flat rib and single bead on the end of the barrel. The H018G-410R model has a rear and raised front sight, and while that leads to better accuracy with a centerfire or rimfire rifle load, it can cause you to shoot high with shotshells depending on how the gun fits.

Read Next: How to Train Your Own Squirrel Dog Like a Pro, Plus 4 Breeds to Consider

Technically this isn’t just a shotgun because the Model 42 fires a .22 LR or .22 WMR in addition to a .410 load. But you’re getting the best of both worlds—a shotgun load for closer shots and a rimfire in case you have to take a longer poke at a squirrel. It’s also a takedown, so you can break it down with the simple push of a button and keep it in the truck inside the bugout bag that comes with it. I’ve shot the Model 42 quite a bit at the range and was surprised with its accuracy. It’s a compact gun and I’m a big guy—that typically adds up to an ill-fitting gun I can’t shoot worth a damn. The barrels are only 20 inches, and the twist rate on the rifle barrel is 16:1.

Here’s another way to get a quality 28-gauge pump shotgun in your hands for a reasonable price. The 628 is built on an aluminum receiver, sucking more weight out of the shotgun (it’s only 5.4 pounds). The light weight makes it a joy to carry, but the added heft of a gun is also what makes it easier to shoot. I found that for squirrel hunting it doesn’t make a whole hell of a lot of difference, but if you plan to use the gun for wing shooting too, take that into consideration. Otherwise, it’s a damn good gun for the price (under $450). It has a Turkish walnut finish on the stock and fore-end with a blued barrel that is threaded for five interchangeable chokes (Skeet, IC, LM, M, and F).