10 Techniques for Catching Fish in a Survival Situation 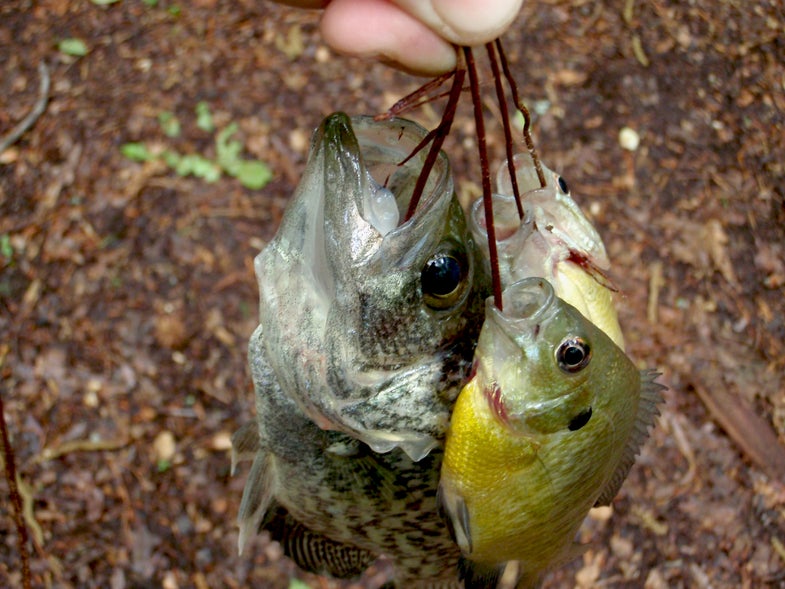 If you find yourself in a wilderness survival scenario with a little fishing gear in your survival kit, or you know how to fabricate some gear in the field, you can often provide food for yourself and others by hitting the local waterway and pulling out some fish. Check your local fishing regulations and practice some of these time-tested survival fishing techniques (when and where they are legal).

These nets are used to catch fish as they try to swim though the openings of the net and become entangled. Gill nets can be effective in different places at different times, but they yield the best results during a migratory fish run.

A net typically used to land fish caught with hook and line can also be used to scoop up unaware fish as a standalone fishing method.

It’s not always easy to pierce the slippery scales or defeat the slender profile of most fish, but spear fishing is still a worthwhile activity in most survival situations. Just make sure you compensate for refraction and aim below the fish.

Only used in dire emergencies, fish poison has traditionally been derived from crushed plant materials that release compounds into the water and stun or kill the fish. Poison is typically used in still water and small pools, though this ancestral technique has been used in rivers and larger waterways.

HOW TO WEAVE A MINNOW AND CRAWDAD TRAP

A simple hook and line, along with some bait, is really all you need to catch fish. Hand lines are usually handheld coils of line that are cast and retrieved by hand.

Using a gorge hook is very different from using curved steel hooks. The technique here is to allow the fish to swallow the bait, which has a sharp thorn or bone shard sticking out of it. Do not jerk the line to set the hook. After you think a fish has swallowed the gorge hook, slowly coax it into a waiting dip net.

MAKE YOUR OWN PRIMITIVE FISH HOOKS

One of the strangest and crudest fish procuring methods, a striking iron is used just as its name suggests. Large, slow-moving fish can be stunned by striking it with a rod or slender bar of metal as the fish nears the surface.

A container with a funnel-shaped entrance are all you need to build an effective fish trap . Take into account the size and habits of the fish you hope to catch and build your trap to fit. Wooden slat traps for catfish are typically more than a yard long, with a large funnel opening wide enough to imprison even a fat blue cat. Minnow traps can be made from a soda bottle with the neck cut off and inverted inside the bottle.

HOW TO BUILD A FUNNEL FISH TRAP

A weir can be a wall, circular fence, or large funnel designed to direct fish into your trap. Some of the traditional weir construction styles of ancient times are still being used today. Why? Because they work. Weirs can be built of stone for permanent construction, or by driving stakes or posts into the mud or sand for semi-permanent installations. A weir can also aid your spear fishing and dip netting efforts.