Survival Skills: How To Weave A Minnow And Crawdad Trap

The idea of a fish trap must have been a game changer for our ancestors. Imagine being able to catch... 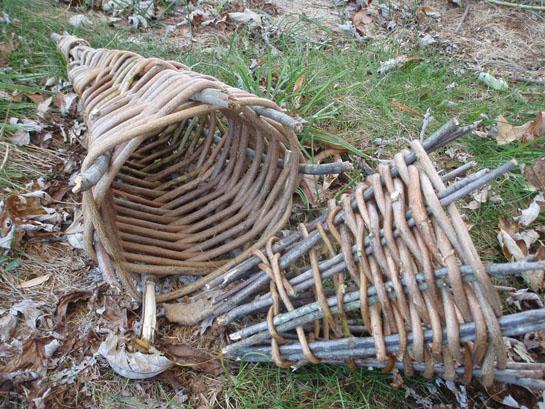 The idea of a fish trap must have been a game changer for our ancestors. Imagine being able to catch fish and other aquatic critters without even being there. While today we’d argue that being there catching the fish is the whole point, when subsistence is your goal it makes a lot of sense to employ survival strategies like fish and crayfish traps. This small trap is just about right for my local crayfish, and took an hour and a half to build, including harvesting materials.

Gather some branches and straight saplings (arrowwood viburnum is a good choice) that are at least 30 inches long with diameters of between 3/8 and 1/2 inch. These will be the ribs of the fish trap. Next, collect several hundred feet of pencil-diameter vines to weave into the trap walls. This is a great use for the despised kudzu vines. Other viable choices are wild grape, wisteria, and any other handy vine (except poison ivy, of course).

Bundle the tops of the slender saplings together. You could tie them with cord, or even do a wrapping with your weaving vines. Next, start weaving your vines around the bundle, opening the bundle a little more as you go. A simple “over-under” weave is fine, but the resulting trap will be stronger if you “twine” two vines at the same time. This is done by twisting two vines around each of your sapling pieces. Make sure the gaps are minimal, or the fish will go wriggling out of your trap.

Now make a smaller, flatter cone with a similar technique. Size it to just fit in the mouth of the large cone. There should be enough gap where the twigs come together, that fish could enter. This is the trickiest part of the weaving, as you are dealing with a lot of small, loose pieces when you start.

4. Bait And Wait
Insert some fish bait into the trap cone, install the funnel mouth piece and tie the trap to a stake underwater. The fish will find their way into the trap, lured by the scent of bait, but usually cannot find the hole through which they entered.

Ever made a homemade fish trap, crab pot or the like? Tell us how it worked out for you in the comments.