Survival Skills: How to Make a Toothbrush in the Field

Have you ever been caught out in the field minus your toothbrush? It can happen. Thankfully, our ancestors had plenty... 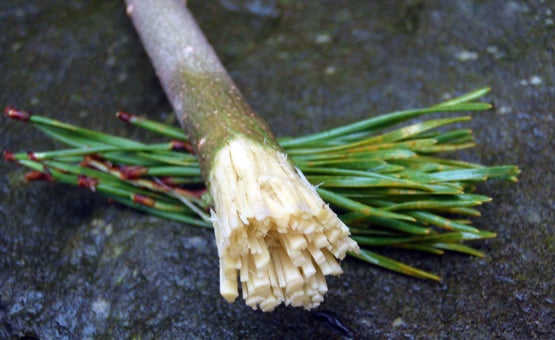 Have you ever been caught out in the field minus your toothbrush? It can happen. Thankfully, our ancestors had plenty of options that we can still use today so we don’t end up going to bed with stank breath.

**Tuft Of Pine Needles **
You might be somewhere without your toothpaste, but if pine is nearby — at least you have a toothbrush. Grab a tuft of pine needles, and give your teeth a good scrubbing. The needles leave your breath piney fresh, and if you chew them a little, you’ll also be getting a few milligrams of Vitamin C. Just skip the Loblolly Pine in the American Southeast, and the Ponderosa Pine in the American Southwest, as these two species have some toxicity.

Pounded Hardwood Twig
The Native Americans in my home state of Virginia were well documented in their historic use of pounded hardwood twigs as tooth brushes. Dogwood, Oak and Maple were just a few of the non-toxic hardwood varieties in use 300 to 400 years ago. These twig toothbrushes were so common in fact, that they were widely used among the colonists and slaves of Virginia.

To make a twig toothbrush, simply cut a green twig about the diameter of a pencil and just as long. Pound the end of the twig with a clean, smooth rock. Then chew this end for a minute to moisten and soften the bristles; and finally, brush away.

You can even bend the end of the twig at a 90 degree angle to get the backs of your teeth as well, which is a trick you cannot do with the pine needles.

Make sure you skip potentially poisonous twigs like Mountain Laurel, Rhododendron, Black Locust, Yew, Buckeye and Horse chestnut. It wouldn’t hurt to know what those trees and shrubs look like anyway, to avoid them all for food use, cooking uses and even firewood.