How to Start a Fire With a Gum Wrapper and Battery

If I had a specialty, it would be fire building. I absolutely love it. Not in the creepy way a... 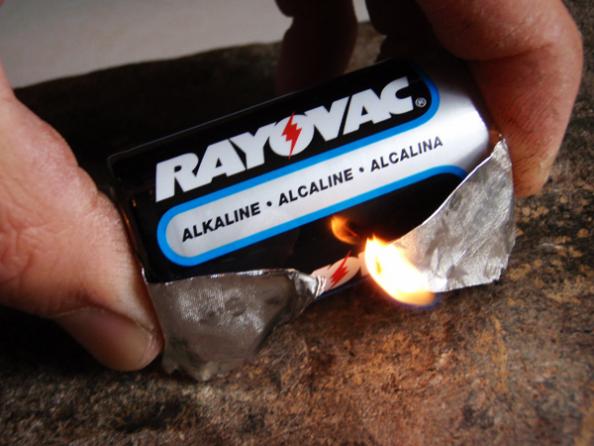 If I had a specialty, it would be fire building. I absolutely love it. Not in the creepy way a pyromaniac loves it. But in the way you appreciate something that can sustain your life.

So my knee-jerk reaction when someone on television starts a fire with dubious materials or in less-than-hospitable conditions is usually skepticism or flat-out disbelief. When I saw Dual Survival’s new military survival expert, Joe Teti, light a fire with apparent ease using a gum wrapper and a single battery, I had to try it out for myself.

According to the show, I would need a single D-cell battery, a paper-lined foil gum wrapper, and some dry tinder. The use of a single battery is probably the most surprising element of this technique, as all other electrical fire starting methods involve higher voltage. A single AA, C, or D cell will only provide 1.5 volts. For fire starting you 3 volts or more, so you should need two 1.5-volt batteries in a circuit to light, say, steel wool.

The tinder is easy enough to come by, as is the gum wrapper thanks to litter bugs around the globe. The wrapper should be torn or cut to create a thin bridge of foil in the center of the battery. The easiest way to do this is to fold the wrapper in half lengthwise, and use scissors to snip out a triangle from it. Let the triangle point come within a 1/16th of an inch of snipping the wrapper in two. If you do manage to accidentally clip it in two, it can still be used by manipulating the two sides of the wrapper to touch. Your tinder should be positioned at the bridge, to catch a spark or a tiny, short-lived flame–or so they said on tv.

So does it work? Yes, and with a very short learning curve. Within 30 seconds of connecting the gum wrapper to the positive and negative terminals of the D cell, there was an orange glow at the thinnest part of the foil bridge, and I actually got the little puff of flame as seen on TV. As the thin part of the wrapper melted and burned, I did get subsequent sparks of glowing orange, but no more flame. A Wrigley’s gum wrapper and a single D battery really makes fire! And they said TV would rot our brains.
Do you have a way to make fire that no one has seen before? Why not launch it here? Let us hear about it in the comments.

THE ULTIMATE SURVIVAL MANUAL
Check it out for more great survival skills.