With snow on the ground in winter, setting traps for food can be trickier than usual. But a skilled trapper... 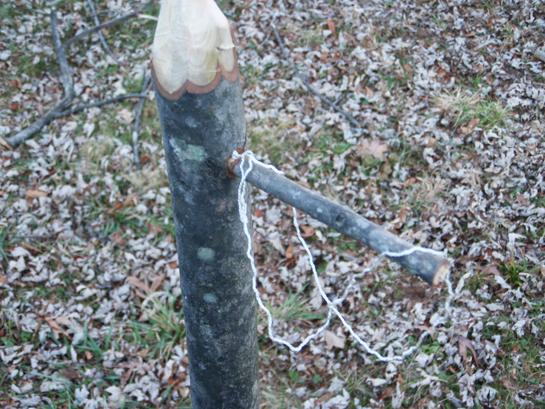 With snow on the ground in winter, setting traps for food can be trickier than usual. But a skilled trapper should have plenty of options, including some classic traps of ancestral origins. If you have a pole with a hole drilled near the top, a bit of twine, a twig, and a rock, you can set up the Ojibwa bird trap to catch small birds to add to your emergency food supply. While each little bird is not a meal in itself (less than 100 calories), add them together and you’re getting somewhere.

This ancient trap has been used for centuries by the Ojibwa nation in modern-day Canada and their Chippewa kin around the Great Lakes. You can use this versatile trap year round by sticking it in mud or shallow water in swampy areas; sticking it into the ground in an open field; or driving it into snow in winter. The staff looks like a safe and inviting perch to birds, but a trigger ensnares the unsuspecting avians. Grab the following materials and set one up for yourself the next time you need to trap birds in order to survive.

– A pole or staff, similar to a walking stick

– A knife or any other tool to drill the hole (a ½ inch in diameter, or a little smaller)

– A pinky finger-thick stick, about the length of a pencil, with one end tapered slightly

– 3 feet of cord or snare line (one strand from the guts of 550 cord will work, but something a little thicker would be better)

Get started by carving points on either end of the pole. This makes the one end easier to drive into the ground, and discourages birds from alighting on the other (instead of the perch trigger). Drill a hole completely through the pole, as cleanly as you can with your available tools. It’s interesting to note that the sharp flint and chert drill bits of the Native trap builders can drill a hole just as clean and crisp as modern metal drill bits. Survive any wilderness situation with these critical tips.

Your next task is to tie a small bowline knot in the end of your snare line, and pass the line through the loop creating the snare. Tie the other end of the line to the rock. After you’ve picked a trapping site and driven the pole in the ground or snow, use a twig to thread the snare line through the hole in the pole. Tie a fat knot in the line, using two or three overhand knots in the same spot. This knot cluster should be tied close to the snare noose. This stopper knot, coupled with the twig, form the trigger system. Lay your noose over the perch once the stopper knot has engaged the twig, and the trap is set. If your noose keeps blowing off the perch in windy weather, wipe a little sticky pine pitch on the contact points.

Keep in mind your local trapping rules and regulations as you experiment with this trap, and other traps that might catch song birds. Most small birds are not legal for taking, in traps like this or in other ways. This trap is meant to be a survival trap, catching needed food in an emergency situation. However, you’ll starve if you wait until an emergency to start working with this trap style. Consider setting the trap without the noose, as a non-harming device, to practice your skills in a more legal manner.

Ever made this bird trap? Or eaten little birds? Tell us about it in the comments.