For anglers willing to execute night ops, giant walleyes are the payout 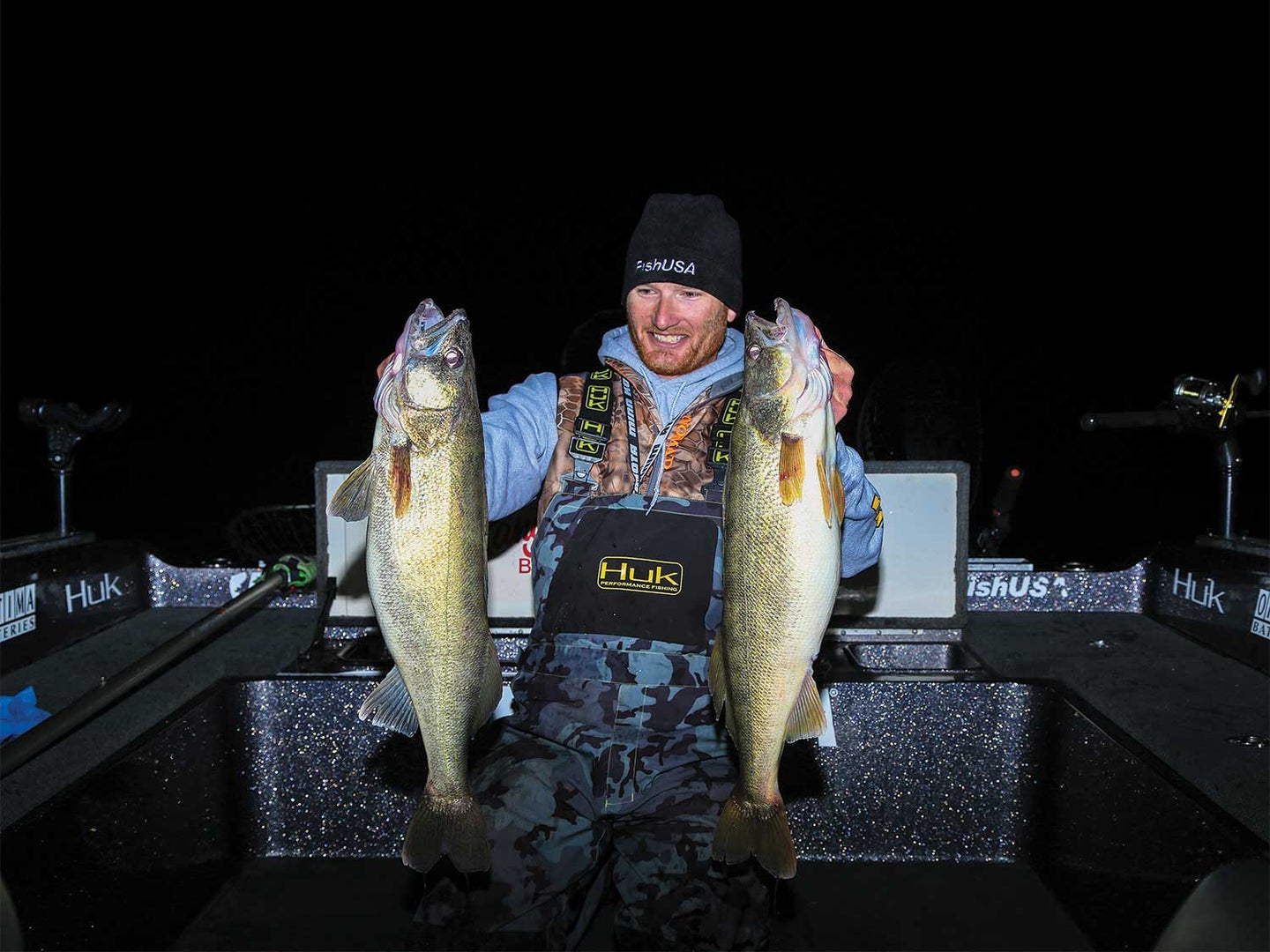 Fans of early hip-hop acts might remember Whodini. The group’s 1984 hit “Freaks Come Out at Night” has always been a personal favorite, if not something of a mantra for walleye guys who live for sunset in the fall. This time of year, the big fish move shallow after dark for one reason: to gorge on large baitfish before winter sets in. The only problem is, everything is more complicated and takes longer in the dark, which is why only the diehards are willing to brave chilly nights to score. If you want to join their ranks, preparation is the first step. Once you’ve got the boat in night mode, a few tweaks to your daytime program are all it takes to start landing those “freaks.”

In daylight, clear the boat decks of unneeded items that will catch lines or create tripping hazards. For dark missions, I trade my usual landing net for one that has a shallow bag. If you only have a net with a deep bag, use a zip tie to gather it up and make it shallower. I’ll pull out all the lures I plan to use ahead of time and put them in a separate tackle tray, storing only one in each compartment. Naturally, you’ll need a few light sources on the boat, but put some thought into them. For stationary lights, LEDs provide better coverage while taking less of a toll on the boat’s batteries. Make sure any stationary lights never shine directly into the water, as walleyes are extremely light sensitive and can spook. Headlamps or handheld lights used to aid in netting should have a red filter because it helps the anglers’ eyes stay adjusted to the dark and won’t alert other fish to your presence.

Covering water after dark is just as critical as it is during daylight hours, though simplifying your approach to improve your trolling efficiency pays off. If you prefer trolling with planer boards, be sure to use reels with a line-counter feature. During the day, you can eyeball line length, but at night, having the ability to set your lures at exactly the same distance once you start getting bites is key. Another benefit of planer boards is you can use them to put lures in water too shallow for the boat. I’ll hug contour lines using my GPS but use my planers to get baits to shallows where fish would spook—or, worse, bang up my prop—if I moved in right on top of them. To ensure your boards are exactly where you want them, use tape to affix a glow stick to each one.

Suspending stickbaits such as the Rapala Shadow Rap are my go-tos. While there’s some debate over the importance of color after dark, I prefer baits with good contrast, such as those with a black back and chrome or white sides. Suspended stickbaits also don’t get hung up easily, which spares some headaches that are even more painful to remedy at night.

Catching big walleyes from shore can be a serious challenge in summer, but on fall nights, the boatless angler has a serious upper hand. Piers, break walls, and marinas often have just enough lighting and provide just enough of a current break to draw in loads of baitfish. Rest assured, the heavy ’eyes will be there too. Many of these areas are so shallow that a boat couldn’t get in close enough if you wanted it to—or at least not without spooking the fish. To increase your odds of hitting a foot-patrol trophy, don’t be afraid to throw on some chest waders. Getting in the water allows you to fish productive areas the guys onshore can’t reach, or to present lures at angles they can’t match. Use an 8-foot spinning rod to extend your casts and walk softly. Be stealthy with your movements until you get in range of the fish.