I Ate Raw False Albacore — and Liked It

Albies get a bad rap for being too oily and bloody to consume, but it all comes down to how the fish is processed after its caught 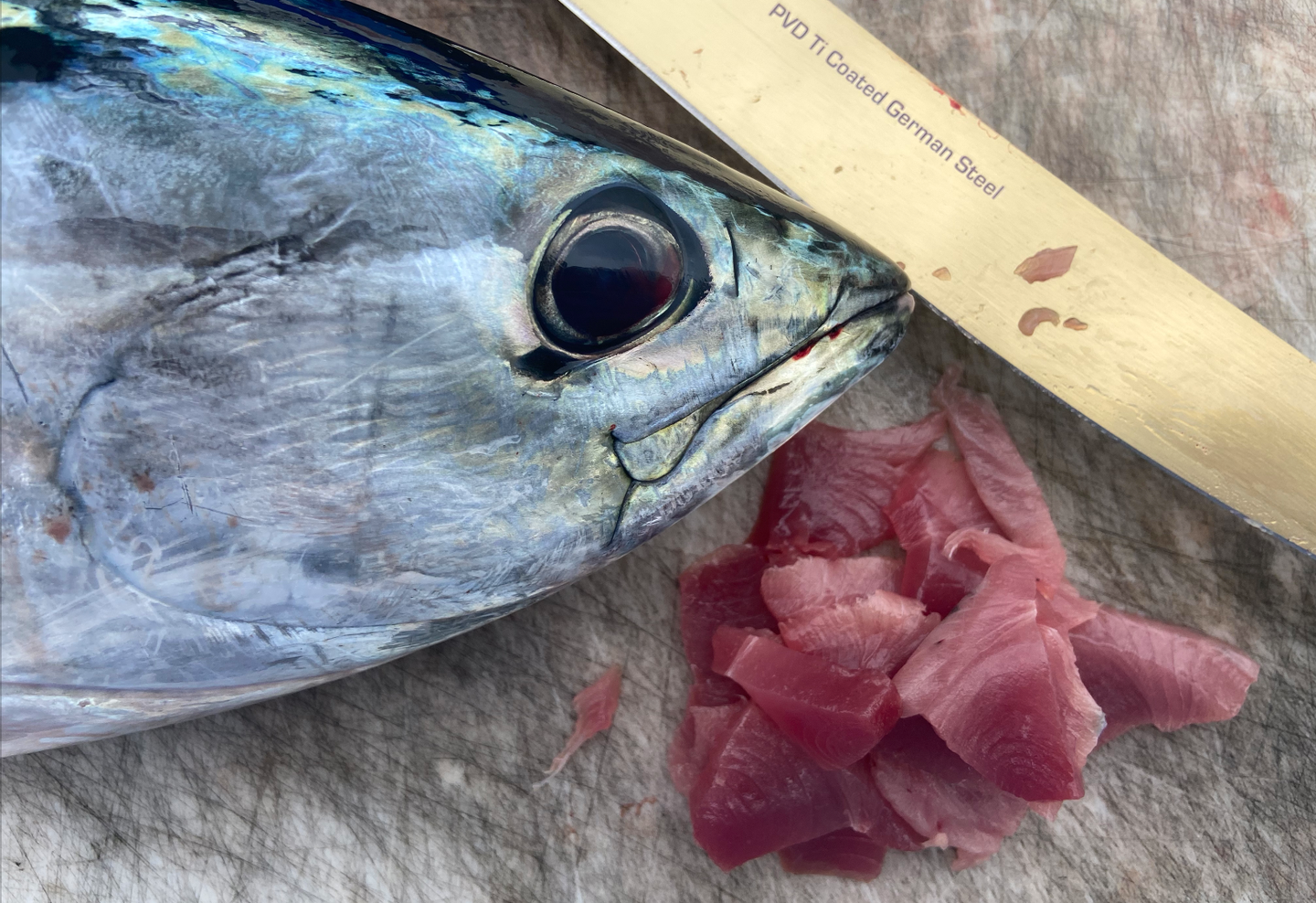 Albies, or bonita, are underrated table fare, but you've got to treat them properly. Joe Cermele
SHARE

Americans don’t like fish that taste like fish. We’re most comfortable with clean, white meat fillets that taste more like whatever sauce or seasoning gets slathered on than the true flavor of the fish. This explains why so many fish get labeled “fishy,” and in general, these are species with a higher fat and oil content.  Bluefish fall into this category, as do most mackerel. In freshwater, lake trout have a reputation for being too strong flavored for most palates. That’s not to say nobody eats them, but these fish are more of an acquired taste in the U.S. Leave the country and you’ll find that throughout the rest of the world, the opposite holds true. People in other cultures gravitate to fish that tastes fishy, which is why you’ll find false albacore—a.k.a. bonita in the southern U.S.—in fish markets from Italy to Spain, Mexico, to Brazil. They are one of the most abundant species in the Atlantic and Mediterranean, yet in our country they are considered unfit for human consumption by most anglers. Last fall, I decided to find out if that stigma was really warranted.

I’m not coming down on anyone who dislikes “fishy” fish, because I don’t like fishy fish. I’m the guy who pays extra to sub out the Boston mackerel on my sushi deluxe platter in favor of more salmon or yellowtail. Still, despite the false albacore’s reputation as a swimming bag of cod liver oil, every time I landed one, I was always curious. After all, they look just like a tuna, and they’re made of pure muscle. Their speed and power has earned them a cult following in the Northeast and Mid-Atlantic states, where their fall inshore migration puts them in range of anglers with small boats and even those with two feet on the sand. In the South and Gulf, they can be pests offshore, snatching baits intended for yellowfin tuna or king mackerel. I’ve caught them everywhere they live in the U.S., and while I’d never eaten one, I’ve cut up hundreds for bait. Doing so doesn’t exactly make your mouth water.

A false albacore’s meat can be so dark red with blood and oil it can sometimes appear black. But when a crew of my daring buddies and I decided to turn one into sashimi instead of strip baits, we knew the most critical part of the process was going to be not treating the fish like bait. The second our first albie hit the deck, we gave it the same care and respect as we would a bluefin tuna, and in doing so learned a valuable lesson all anglers need to understand regardless of what they chase.

Step one was killing the fish immediately. To do that, we used a tuna spike, a tool that punctures the brain, paralyzing the fish instantly. This is a critical step in fish care that many people overlook. Many species—tunas in particular—build up acid in their muscles during a fight that can alter the flavor of the meat. Death stops acid production. Likewise, when a fish beats itself up flopping wildly on deck or in a fish box, its meat can become bruised. This is why you’ll never see a commercial tuna angler letting a high-dollar fish thrash around in the cockpit.

Next, we severed the albie’s gills and made a few cuts at the base of the tail. Since false albacore are relatively small, we could place the whole fish face down in a bucket of saltwater, which we changed frequently as its blood drained out. Bleeding is a practice that’s often debated, with some anglers believing all fish headed to the table should be bled. In my opinion, it’s less critical with mild fish like fluke, seas bass, walleyes, and perch, and I’ve never noticed a difference in flavor between and bled and non-bled fish. But if you’re one of those people that hates “fishy” fish, prompt bleeding can turn a species you were sure was too strong into one you genuinely enjoy. I’ve shocked many people over the years who were sure bluefish was too oily for them simply by preparing a fillet from a fish that was properly bled within minutes of landing. False albacore, however, are far oilier than bluefish, so would bleeding really matter?

Once the water in that bucket stayed clear, we transferred the albacore to the fish box, packing copious amounts of loose ice around it so it would chill fast and not slide around in transit. By the time we tied up at the dock several hours later, the fish was so cold it actually hurt to handle. Using a clean knife (not the boat’s rusty bait knife) I loined the fish out with the same care and attention I’d have given a true tuna. The results were fascinating. The meat was identical in color to a yellowfin loin. Close nasal inspection revealed none of the normal “fishy” smell you’d get when haphazardly chopping up a fresh-caught albie for bait. I thinly sliced one of the loins, putting some pieces in a bag with a splash of ponzu sauce and leaving some plain as a control group. Then we hesitantly went for the plain pieces first.

The verdict was surprising. The plain false albacore tasted clean and sweet with no off-putting flavor whatsoever. We were all shocked. Is it as good as a piece of raw yellowfin or bluefin? It’s not, but we all agreed it was on par with lesser tunas like skipjack and blackfin that more people routinely eat. The pieces dressed with ponzu sauce were even better.

I’m certain the results would not have been the same had we not taken such extreme care with this fish. Likewise, I’d suspect that freezing a false albacore loin and grilling it later wouldn’t be as good. So, am I suggesting whacking and stacking as many albies as you can? No, but taking good care of just one provides some excellent dockside sashimi to cap off a day of testing your drag’s mettle on albies. I’ll never make an involuntary dry heave sound when someone brings up eating one again.