If it had been taken on a rod and reel, it would’ve beaten the world-record hogfish by several pounds 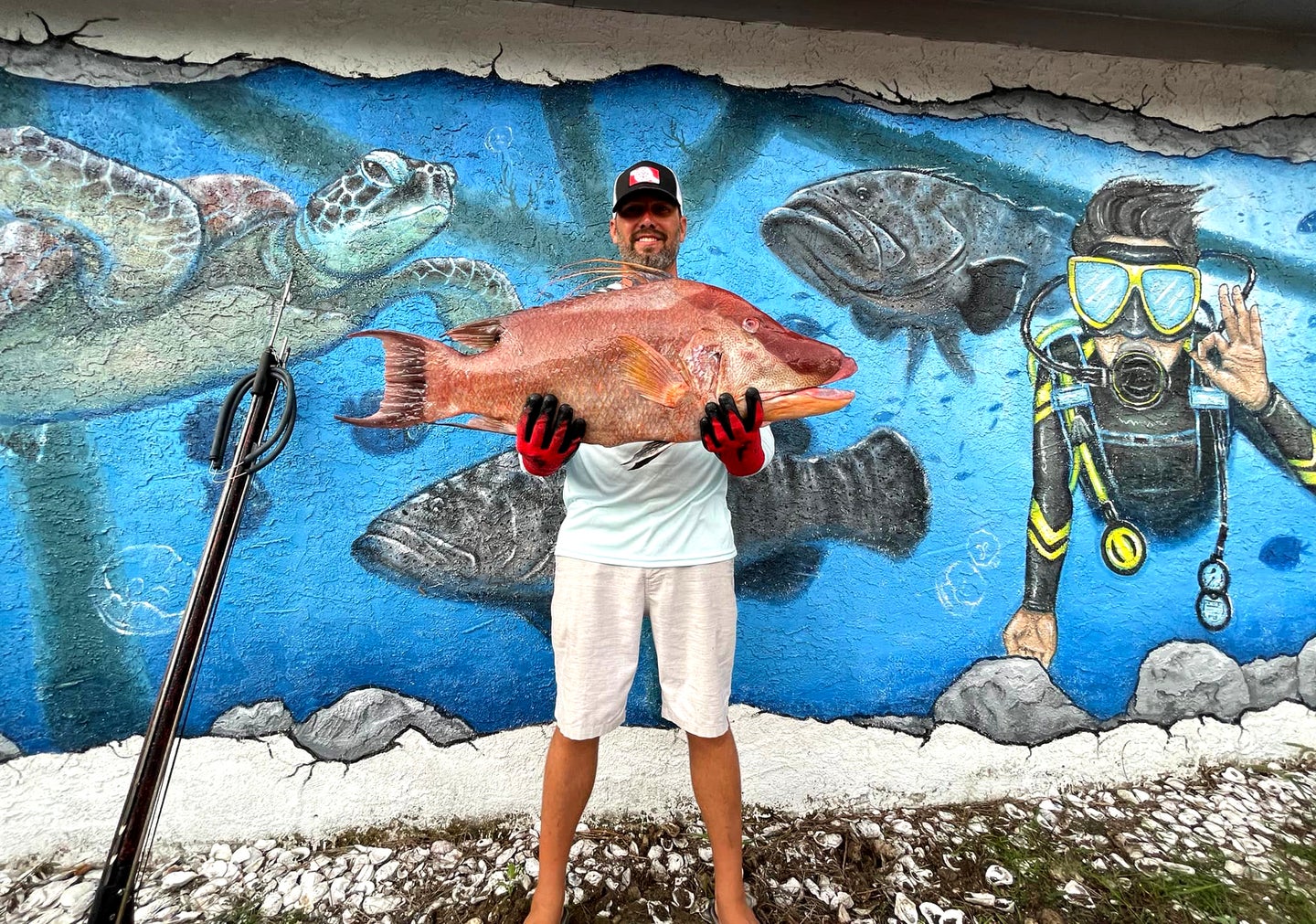 Josh Summerville, 42, has been diving and spearing fish for a decade and a half. And on his day off from working as a dive master and boat captain at Panama City Diving center, he did what some folks would expect: he went diving with a couple buddies.

Summerville and his pals Patrick Green and Ben Carpenter were on the dive center’s 36-foot Newton boat, called the Steel Slinger, on Aug. 2. They were 40 miles offshore Panama City Beach, home port of the crew.

It was their first stop of the morning, and it started to rain. That delayed their first “drop” of the day into the Gulf of Mexico of the day and waited to learn if there was lightning in the storm that would halt their dive. After 20 minutes or so the storm and lightning passed, and they readied their gear to go deep.

“As we got set to go overboard a rainbow suddenly showed, and someone said, ‘Okay, let’s get in the water and find our treasure,” Summerville remembers, laughing.

They were anchored on a live-bottom reef area the stretched to 156 feet, a place locals call the “Three-to-Five” region. It’s a well-known spot with rock bottom and lots of ledges that hold marine fish, and Summerville has been diving there for years.

He descended in his scuba gear to about 100 feet and loaded his Ocean Rhino RX5 speargun that shoots a stainless-steel spear.

“The water was really clear, and I looked down and saw a big hogfish,” he says. “I was shocked to see him, because usually we don’t see many hogfish off Panama City. There are more of them to the east near Carrabelle or farther south in Florida. But there he was, and I went toward him right off.”

The big hogfish was about two feet out from a ledge, and once Summerville got to the fish’s level it started to swim away.

Summerville pursued it, waiting for a good opportunity to shoot the fish. He almost took a shot, but waited a bit for a better angle, then raised his spear gun and fired.

“He was about 10 feet away, and I hit it good in the jaw, just under the eye,” states Summerville. “He tried to go back under a ledge. But I got ahold of the spear shaft and pinned him to the bottom until I could put him on a stringer.”

Summerville continued his deep dive and shot a mangrove snapper. Then he returned to the surface where his buddies were amazed at the size of his hogfish. But they had no idea of its weight or what the current Florida record was for the species until they started home and got within cell phone range of shore.

“I got a buddy on the phone and told him the fish was over 33 inches long and he said to get him weighed on certified scales because it could be a record hogfish,” said Summerville.

It has been certified by the Florida Fish Commission as the new state-record hogfish. Florida marine records allow for speargun shot non-gamefish species, such as hogfish, which are rarely caught on a line.

The IGFA all-tackle record hogfish is 21-pounds, 15-ounces. Summerland’s hogfish likely would have bettered that world-record fish had it been caught with a rod-and-reel.

Summerville has speared larger fish while diving, like a 50-pound cobia and a 49-pound gag grouper. But he’s never taken a state record fish, and a replica mount from a taxidermist is on tap for him.