A whale may have head-butted Bill Speth's tuna boat, sending another angler overboard and punching a hole in the hull 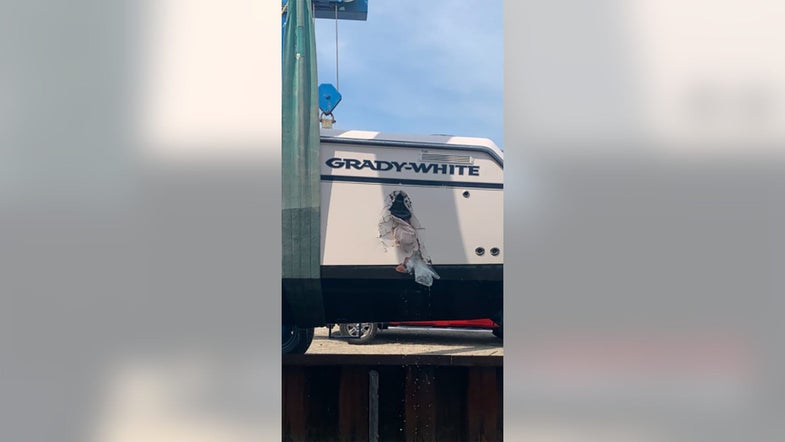 It wasn’t a typical Rhode Island fishing trip on July 11, for five tuna anglers aboard a boat named No Plans. They were working the waters about 10 miles off Block Island when a school of fish rose to the surface.

Then something slammed into their boat so hard one angler fell overboard.

“It was like an explosion,” said Speth. “My battery switches and my two main breakers just shattered. The boat lost all power. All of us were in disbelief. I mean, it’s just so very hard to explain.”

Whatever slammed into their boat punched a huge hole through the side of the hull near the stern.

The fisherman who fell out of the boat upon the impact said he landed on top of a whale. When the anglers helped their friend climb back into the boat, they realized they were taking on water.

Fortunately, another fisherman was nearby and helped plug the boat hole and radio for assistance. All five men had to be rescued by the U.S. Coast Guard.

Speth has been fishing off the coast of Block Island for more than a decade and says it isn’t uncommon to see whales and dolphins. That’s why he believes it may have been a whale that rocked his boat, especially since there was plenty of commotion in the ocean beforehand.

“I’ve seen the whales or dolphins that active before, but I’ve never seen one hit a boat,” he continued. “I’ve heard of boats hitting whales, but we were drifting and the whale hit me.”

“It’s not unheard of, I’ve just never heard of it in 23 years,” said Phil LeBlanc, with Boat Towing Company who helped with the rescue. “The whale breached up out of the water and essentially head-butted the side of the boat.”