Gun News of the Week: High-Tech ’Smart Gun’ Technology Can Be Foiled by Low-Tech Magnets

Plus: Will 'Clear Guidance' in DC Ruling Spur Supreme Court Review of 'May Issue?' 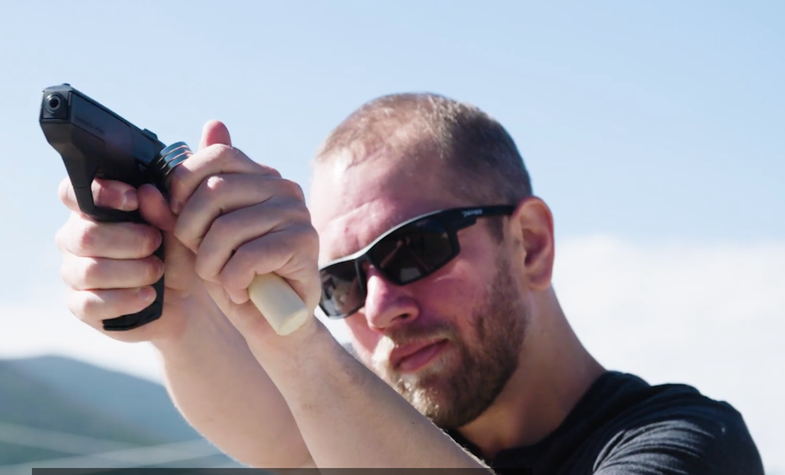 A screenshot from the Wired video, here. via Wired
SHARE

Will ‘Clear Guidance’ in DC Ruling Spur Supreme Court Review of ‘May Issue?’

The U.S. Court of Appeals for the District of Columbia Circuit’s 2-1 ruling on July 25 struck down Washington DC’s third attempt in 40 years to limit handgun rights in a decision Constitutional scholars say provides “clear guidance” to the U.S. Supreme Court on restrictions imposed by some states and local governments on exercising a Constitutional right.

The ruling by a three-judge panel in Grace vs. District of Columbia gives D.C. officials 30 days to decide whether to appeal for review by a full complement of D.C. Circuit judges. If the court does not agree to revisit the case, the order to permanently block enforcement of the “good reason” requirement would take effect seven days later. The challenge was brought by gun owners, the Second Amendment Foundation and the Pink Pistols, a gay-friendly shooting club that has been aggressive it seeking to “restore gun rights for citizens in Washington DC.”

The ruling blocks the District from enforcing strict limits on carrying concealed firearms in public, by requiring citizens state a “good reason” to exercise a Constitutional right. “The good-reason law is necessarily a total ban on most D.C. residents’ right to carry a gun in the face of ordinary self-defense needs,” wrote Judge Thomas B. Griffith, who was joined by Judge Stephen F. Williams. “Bans on the ability of most citizens to exercise an enumerated right would have to flunk any judicial test.”

Ann E. Marimow, in a July 25 Washington Post article, writes that the court’s rejection of the District’s permitting system “is the latest legal blow for city officials who have been forced to rewrite gun-control regulations ever since the Supreme Court in 2008 used a D.C. case to declare a Second Amendment right to gun ownership. The ruling follows proposals from Republican members of Congress that would require the District to honor concealed-carry permits from other states in the wake of a June shooting at a GOP congressional baseball practice.”

That 2008 ruling was District of Columbia v. Heller. It struck down a D.C. law that banned all handgun possession in the city. Clark Neily of the Cato Institute, one of the attorneys who challenged D.C.’s handgun ban in the Heller case, called the D.C. Circuit’s ruling “thoroughly researched and carefully reasoned” and said it would “make an ideal vehicle for the Supreme Court to finally decide whether the Second Amendment applies outside the home.”

Second Amendment advocates hoped Peruta v. California was the case that would do just that. In Peruta, the 9th Circuit Court ruled that the Second Amendment does not protect the right to carry a concealed weapon in public. After reviewing the case for more than six months in conference, the Supreme Court opted not to accept the case over the objections of Justices Clarence Thomas and Neil M. Gorsuch.

— A huge week for guns: A federal circuit court has done what the Supreme Court would not

— Will D.C. court’s decision on concealed guns be the tipping point?

More than 20,000 techies attended the 25th annual Defcon Hacker Conference in Las Vegas, a three-day geekfest that ended July 30. Among activities on the agenda: “Disrupting Robotic Homeostasis And Artificial Intelligent Systems With Electromagnetic Pulse,” demonstrating how easy it is to hack voting machines and confirming how high-tech “smart guns” can be foiled with low-tech tools.

According to Wired’s Andy Greenberg, “a skilled hacker” has “found that if smart guns are going to become a reality, they’ll need to be smarter than this one.”

The hacker, who goes by the pseudonym Plore, showed off a series of “critical vulnerabilities” in the Armatix IP1, “a smart gun whose German manufacturer Armatix has claimed its electronic security measures will ‘usher in a new era of gun safety,’” Greenberg writes.

Plore, in a demonstration for Wired magazine at a Colorado firing range, showed he could hack into the “smart gun” in a published video using what he calls a “dead-simple magnet hack” with about $15 of hardware.

— Video: This is Why Smart Guns Aren’t Ready for Prime Time

— R.I.P. to all of Anthony Scaramucci’s old tweets, deleted in the name of “transparency”

— No Trump bump for the gun industry

— Should audio of the Scalise shooting be used in an ad for gun rights?

With Republicans in control 33-of-50 governorships and both chambers of the legislature in 32 states, the stage was set for 2017 to be a good year for “pro-gun” legislation. But, not so, according to a legislative analysis of 1,600 firearms-related bills filed in state capitals across the country in 2017 by Congressional Quarterly’s State Track.

Perhaps the most significant gun-related legislation of 2017 — which received rare bipartisan support — according to CQ’s State Track were bills strengthening existing laws or passed new ones to help keep guns away from domestic abusers. Lawmakers in Louisiana, Nevada, New Jersey, North Dakota, Tennessee and Utah all passed new restrictions on firearms for domestic abusers this year.

GUNS IN SCHOOLS: Proposals ranged from allowing school staff and faculty with concealed carry permits to be armed on K-12 public school properties, to allowing anyone with a permit to open/concealed carry on school grounds. Only three of at least 18 of these types of proposals passed while several remained in committees for possible carry-over to 2018. Among them:

CAMPUS CARRY: In 2017, at least 16 bills were introduced to allow students and faculty to carry guns on college campuses. Such proposals failed in Wyoming, Alabama, South Carolina, Florida and Oklahoma while they were passed in Arkansas and Georgia.

‘CONSTITUTIONAL CARRY’: In 2016, four states — Idaho, Mississippi, Missouri, West Virginia — adopted “Constitutional Carry,” or permitless carry, which allows people not otherwise prohibited by law from possessing a firearm to carry a firearm without a permit, bringing the number of permitless carry states to 12.

DOMESTIC VIOLENCE BILLS: Twenty-three states have imposed laws limiting access to firearms for domestic abusers since 2013 — including six new laws in 2017 signed into law by Republican governors. Adopted bills include:

For more state news, go to:

— Florida taxpayers are on the hook for $1.1M settlement with Brady Campaign and gun control lawyers

— Texas campus carry: No problems so far at UT-Austin. What does that prove?

Attorneys general from five states — Indiana, West Virginia, Indiana, Michigan, Texas, Utah — filed an amicus brief on July 26 to the Supreme Court challenging a 4th Amendment case that ruled an officer is justified in searching a person if they suspect that that person has a weapon, even if it’s being carried legally.

West Virginia Attorney General Patrick Morrisey told the Associated Press that the filing seeks a review of a 4th Circuit Court of Appeals decision in U.S. vs Shaquille Montel Robinson.

In March 2014, Robinson was stopped and searched by police in West Virginia for not wearing a seatbelt and found with a gun in his pocket. According to Morrisey, Robinson, a felon, had sought to have the evidence that he was armed suppressed, arguing the gun was found through an illegal search that violated his 4th Amendment rights, citing that as far as the officers knew, he could have had a permit and been legally armed.

In January, the Circuit ruled 12-4 that Robinson’s logic was flawed. In his majority opinion, Judge Paul V. Niemeyer wrote that it was “inconsequential that the passenger may have had a permit to carry the concealed firearm” and that, “The danger justifying a protective frisk arises from the combination of a forced police encounter and the presence of a weapon, not from any illegality of the weapon’s possession.”

Morrissey said the amicus filing aims to protect Second Amendment rights of lawful gun owners to carry a weapon without law enforcement concluding an individual at a warrantless stop is “presently dangerous” and subject to a search.

Indiana Attorney General Curtis Hill told FOX59 that the brief seeks assurance that “there’s proper reading of the rights of gun owners and making sure police officers know what to look for with people who have permits. It’s a tough issue of whether simply having a gun and a permit requires it to be a dangerous situation.”